August 23 2018
4
Thanks to the media and Hollywood, almost everyone on Earth knows what the Yellowstone Super Volcano is. The potentially dangerous natural object itself is a giant hollow, a caldera, measuring 80 by 40 kilometers. It has formed as a result of several super-eruptions over the past millions of years. It is determined that the last time Yellowstone erupted 640 thousand years ago. It is believed that the time has come for a new one. 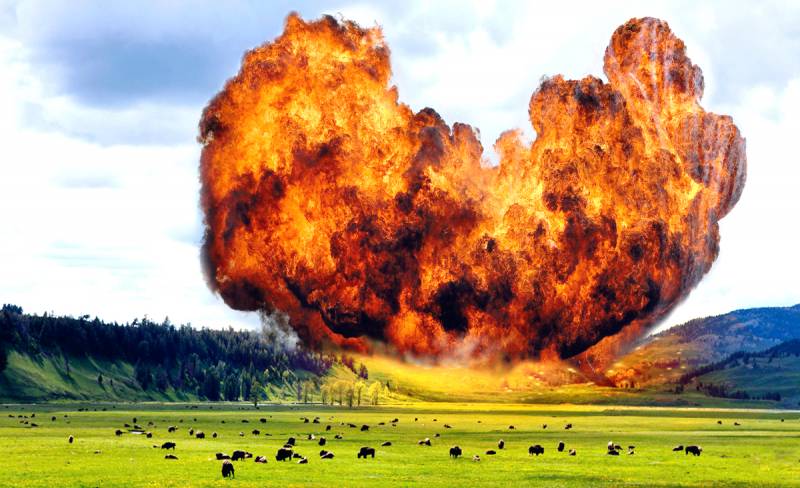 Despite the possible danger, enterprising Americans turned the neighborhood of a supervolcano into Yellowstone National Park with an area of ​​8983 kilometers. Today, anyone can actively relax near the giant caldera for a fee. Thousands of microearthquakes occur annually in the biosphere reserve, and in 1959 a strong one with magnitude 7,6 on the Richter scale occurred. As a result, 28 visitors to the American National Park died.

Today, millions of visitors a year come to stare at Yellowstone. Volcanologists warn of the real danger of a recurrence of strong earthquakes of magnitude 7 in the foreseeable future. It is known that not far from the reserve in another Grand Teton National Park, some of its parts were closed to guests due to the growth of cracks. In this region, earthquakes can cause landslides and collapse of rocks, which is fraught with serious human casualties among numerous visitors.

However, what about the prospects for the eruption of a supervolcano? Some scientists believe that the probability of a crater explosion is 1/730. Others, such as researchers from Arizona, are convinced that the eruption can occur on the horizon for several decades. What is this fraught with for the USA and the rest of the world?

Various scenarios for the development of the situation were simulated by the US Geological Survey. In the worst case, this event can be compared with a nuclear war and the subsequent nuclear winter. As a result of the Yellowstone eruption, red-hot magma can fly to a height of 50 kilometers. All living things will be destroyed instantly within a radius of 500 kilometers from the epicenter, and only 10% have a chance of survival within a radius of 1200 kilometers from a supervolcano. People will die from the shock wave and poisoning by hydrogen sulfide and other gases. Half of the United States is covered with a multimeter layer of ash. Then the acid rain will come.

Will get the rest of the planet. The Yellowstone explosion will provoke eruptions of tens and hundreds of volcanoes throughout the Earth. They will give rise to giant tsunamis that will wash away coastal cities with the entire population. A hole in the ozone layer will increase, which will allow destructive solar radiation to freely irradiate the earth's surface. At the same time, giant clouds of dust will block the sun for years, which will lead to a severe cooling. Vegetation will begin to die, and with it agriculture. From hunger and wars for water, food and resources, billions of people around the planet will die. By the way, it is believed that the territory of South Siberia is least affected. So the Russians have a chance, if that. But this life will be very difficult. The surviving remnants of mankind can sink to the state of the Middle Ages, and even slavery.

Experts believe that there is still time before the next eruption. However, some warn that the caldera could be detonated intentionally, for example, by charging an atomic bomb, which would destroy the lid of the magma chamber.
Ctrl Enter
Noticed oshЫbku Highlight text and press. Ctrl + Enter
We are
Where is Russia going?
The Chinese take Baikal from Russia
Reporterin Yandex News
Read Reporterin Google News
4 comments
Information
Dear reader, to leave comments on the publication, you must sign in.