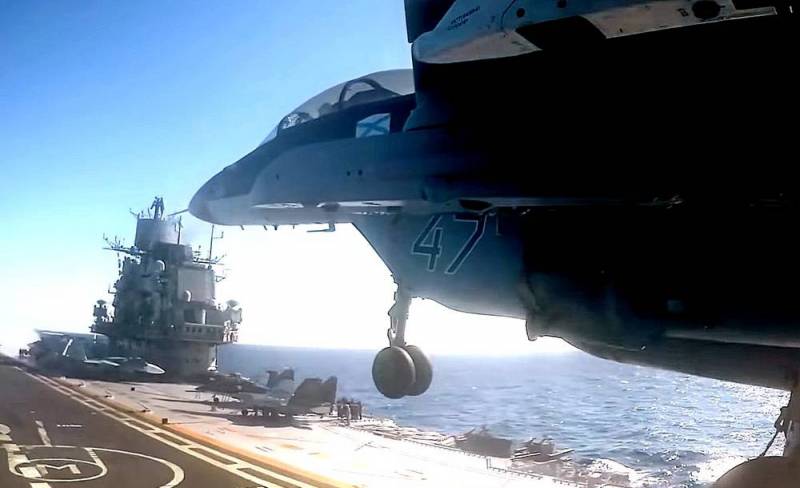 One of the most problematic ships in the Russian Navy is the Admiral Kuznetsov TAVRK. Our only aircraft carrier at the moment is experiencing systematic problems with the power plant, it almost drowned during repairs, and then almost burned down during modernization, and planes fell from it several times into the sea. Sometimes there are calls to stop his torment altogether and send him to scrap metal. But this should not be done in any case, since the key problem is not in the cruiser itself, but in the fact that it is being misused.


Yes, it’s not about Admiral Kuznetsov, but the people. Recall that in 1991, Ukraine almost laid its hands on the TAVRK. The ship was rescued, taking it out of the Sevastopol bay at night, and enlisted in the Northern Fleet of the Russian Navy. Alas, for all the past years, all the necessary infrastructure has not been built to service it. In such high latitudes, the basing of aircraft carriers is not practiced at all. If the "Admiral Kuznetsov" were nuclear, the problem would not be so acute, but the harsh northern climate increased the wear and tear of its boiler and turbine power plants, as if the cruiser was continuously going on military campaigns across three seas.

Perhaps a more optimal solution is to transfer it to the Pacific Fleet, where there is an acute shortage of large surface ships and an obvious militarization of neighboring Japan, which has views of the Russian Kuril Islands, is taking place. There, from TAVRK with a wing of carrier-based aviation and anti-submarine helicopters, there may be more practical use.

The second, the main problem of the cruiser is that they are actively trying to operate it as an aircraft carrier. But he is not. The Admiral Kuznetsov was essentially designed as a large anti-submarine helicopter carrier. Yes, among its tasks is the defeat of large surface targets and support of amphibious assault forces, but the main purpose of the TAVRK is still to protect naval formations from enemy attacks using a large number of aircraft and submarines. In other words, the air defense of the KUG and active anti-submarine warfare. For this reason, the ships of Project 1143 did not have a continuous take-off deck and were equipped with powerful strike missile weapons. Soviet TAVRKs were supposed to cover the areas of combat deployment of domestic strategic missile carriers from attacks by American multipurpose nuclear submarines of the Los Angeles type. For this reason, the basis of the air wing was precisely the Ka-27PL anti-submarine helicopters, as well as the Yak-38 vertical takeoff and landing aircraft.

That is, the "Admiral Kuznetsov" was originally technically a helicopter carrier. Due to the weak tactical and technical characteristics, the Yak-38 deck-based vertical takeoff and landing aircraft could not provide reliable protection against Soviet SSBNs from American Lockheed P-3 Orion anti-submarine aircraft and escort fighters. To replace the defective VTOL Yak-38, the development of the Yak-141 supersonic vertical takeoff and landing fighter was started to be based on the TAVRK of this series. The Soviet plane was way ahead of its time, setting a lot of records.

Its peculiarity was that the fighter could take off not only vertically, but also horizontally, as well as in a shortened pattern. This significantly smoothed the difference in performance characteristics between conventional deck-based horizontal take-off aircraft and "vertical aircraft", which had barely enough power to lift themselves. Accordingly, they had less fuel, less combat load, and less combat radius. Taking off horizontally with the help of a bow springboard, the Yak-141 could approach conventional carrier-based fighters in terms of performance characteristics. Yes, the difference would still remain due to the need to sit upright, but it would not be as catastrophic as in the case of the Yak-38.

Why are we focusing on the possibility of vertical landing? Because the TAVRK is still far from Nimitz in terms of the dimensions and dimensions of the take-off deck. Subsequent events only proved how different these ships are. After the collapse of the USSR, the almost finished Yak-141 project was closed, and from the "Admiral Kuznetsov" they tried to make a full-fledged aircraft carrier with a continuous take-off deck. Instead of the SKVVP Yak-141, it was decided to place the MiG-29K and Su-33 horizontal takeoff fighters on it. We can say that all this was a big mistake.

Let's take a look at the list of incidents on the Admiral Kuznetsov for its short-lived real life as a full-fledged aircraft carrier. On November 5, 2005, 2 serious accidents with Su-33 fighters occurred in the Atlantic Ocean at once. The first fell off the deck during landing and drowned along with the secret equipment on board. The second also nearly fell, only miraculously staying on the deck. In both cases, the cause was a break in the air arrestor. On November 14, 2016, while participating in the Syrian campaign, Admiral Kuznetsov lost a MiG-29K fighter. It was reported that he simply fell into the ocean a few kilometers from the ship, but after that other data appeared in the media. Allegedly, the plane landing in front of him tore the air arrestor cable, and its scraps got entangled behind another cable. This made it impossible to land the following MiG-29K, which was doomed to circle near the TAVRK until it ran out of fuel. On December 4, 2016, another Su-33 was lost during landing, which broke the air arrestor cable and fell overboard. Fortunately, in all cases there were no casualties among the pilots.

What can all these incidents indicate? Do we have the "wrong system" cables? Are the pilots poorly trained? Or is it just that the ship itself, turned from a helicopter carrier into an aircraft carrier, is not adapted to operate such heavy aircraft as the Su-33?

The expert community is more inclined towards the latter explanation, although the factor of poor training and a small number of airborne pilots of carrier-based aviation cannot be ignored. It turns out that there is nothing for the Su-33 to do on the Admiral Kuznetsov, it can only use light MiG-29K fighters, and then very carefully. It should be remembered that these are very old aircraft that need replacement for a long time. What are the options?

For example, you can try to “detoxify” the Su-75, a light multi-role fifth generation fighter. This machine could become the main "workhorse" of the Russian aircraft carrier fleet, if one ever appears. But there is a slightly simpler option, for a transitional period, which in any case will last for a very long time. In 2017, the profile Deputy Prime Minister Yuri Borisov hinted that work on vertical take-off and landing aircraft was resumed in Russia. Apparently, we are talking about the developments for the Yak-141 project. And this opens up interesting possibilities.

If such a fighter is placed on the deck of a TAVRK, then the Yak-141 (modernized) will be able to take off horizontally using a bow springboard, and then safely land in vertical mode. There will be no risk of breaking the air arrestor cable in principle. So, SKVVP could interact with the MiG-29K or Su-75 on the "Admiral Kuznetsov", which will be used for its original design purpose. If you transfer it to the Pacific Ocean, there will be more practical benefit from this than just freezing in the Northern Fleet.
Reporterin Yandex News
Reporterin Yandex Zen
73 comments
Information
Dear reader, to leave comments on the publication, you must sign in.