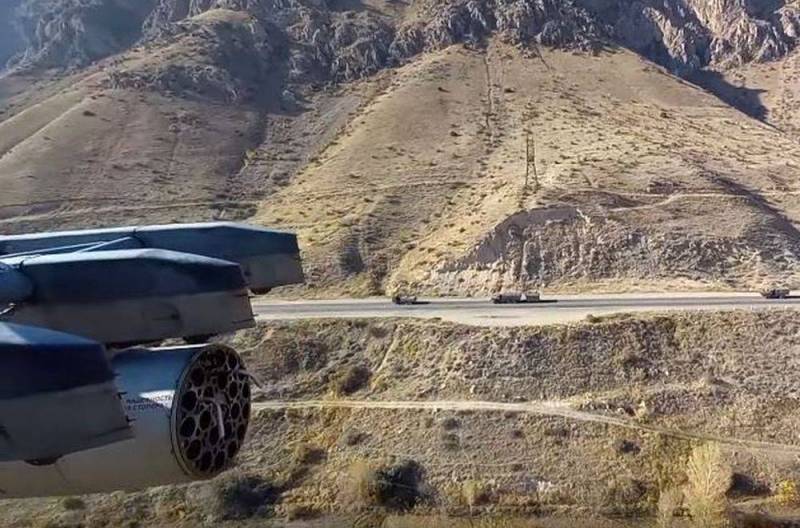 Shots rang out in Transcaucasia again, wounded and killed appeared on the border of Azerbaijan and Armenia. What is this, a new and now the final act of the Second Karabakh War? Should Russia intervene in the conflict, and if so, on whose side?


The war in Nagorno-Karabakh that took place almost a year ago is assessed very differently, depending on sympathy for Baku or Yerevan. It ended with a convincing victory for the alliance of Azerbaijan and Turkey, but in such a way that after a while it will certainly resume. The point is that none of the stakeholders has achieved 100% success.

We have repeatedly noted that one of the main goals of the Second Karabakh was the opening of previously blocked transport corridors in the Transcaucasus. The union of Ankara and Baku needed a land transport corridor through the territory of Armenia, which would connect Turkey, which borders on Nakhichevan, with the main territory of Azerbaijan. This would allow the "sultan" to get a reliable way to the coast of the Caspian Sea, from where the road opens to Central Asia, to Turkmenistan and Kazakhstan, rich in hydrocarbon raw materials. There would be an opportunity to build a "logistics superpower" under the auspices of Ankara, which would lie on the southern trade route between Asia and Europe.

And so, Armenia suffered a crushing defeat, the possible reasons for which we will talk about later. Azerbaijan regained control over a significant part of Nagorno-Karabakh. President Ilham Aliyev received his military laurels as a winner, and "Sultan" Erdogan advertised Turkish weapons to the whole world and was recognized as Azerbaijan's closest friend and ally. But what is the practical use of this triumph? Yerevan opened an air corridor for flights to Nakhichevan, but the land corridor did not appear. This forced the Azerbaijani president to make a series of harsh statements:

We are implementing the Zangezur Corridor. If Armenia does not want it, we will decide by force.
And then he started talking about territorial claims, not over Karabakh, but against Armenia itself:

Western Zangezur (Syunik region) is now under the control of Armenia. But as a result of laying the corridor, we, of course, will return our citizens to the land of their ancestors ... There are such plans.
And what do we see? It is reported about the beginning of hostilities on the border of the Syunik region (West Zanzegur). The data are extremely contradictory, but a certain logic can be traced from Baku's side: to cut off Yerevan by fire control from the southern part of Armenia and the remnants of Artsakh, where the Russian peacekeepers are stationed. Only after the call of the Minister of Defense of the Russian Federation Sergei Shoigu, the hostilities were temporarily suspended. How long?

Now let's say a few words about how strangely the Armenian leadership behaves. The extremely vague and inconsistent actions of Yerevan during the Second Karabakh War were harshly criticized by the citizens of Armenia themselves. It was suggested that Prime Minister Nikol Pashinyan "leaked" Artsakh to Azerbaijan. Allegedly, as a protege of the famous Western billionaire and globalist George Soros, he should not have greatly interfered with the forceful "cutting of the corridor" from Turkey to the Caspian Sea. Say, behind Turkey, with its dreams of the "Great Turan", there is a large old Anglo-Saxon capital interested in weakening Russia's position in the Transcaucasus and entering Central Asia, which is at the same time an underbelly for the Russian Federation and the PRC.

If you think about it, it doesn't sound so crazy. And the last actions of Nikola Vovaevich fit into this outline.
So, instead of starting to build a real fortified area in Syunik and carry out mobilization in response to Azerbaijan's aggression against the sovereign and indisputable territory of Armenia, he ran to Moscow to complain. Moreover, he is aware that the Kremlin deliberately chose to distance itself from the conflict between Yerevan and Baku, maintaining relations with both sides. Why would he do that?

Here another player enters the scene, striving to play an ever greater role in the Transcaucasus. This is France. Recall that in 2008 it was President Sarkozy's intervention that stopped Russian troops 40 kilometers from Tbilisi. Now President Emmanuel Macron is climbing into Armenia.

French diplomacy has developed an activity in order to revise the concluded trilateral ceasefire agreement in Karabakh and propose a new plan. Apparently, it may consist in sending peacekeepers to Artsakh from the Fifth Republic, as well as in the deployment of French troops on the border of Armenia and Azerbaijan. The head of the European Council Charles Michel, French by nationality, is ready to petition for the allocation of 2,6 billion euros to Yerevan by Brussels for economic recovery and political reforms. In March 2021, the Comprehensive and Enhanced Partnership Agreement between the European Union and Armenia entered into force:

Effective implementation of the agreement will bring tangible results to the citizens of Armenia, contribute to the strengthening of democracy, political, economic and social stability through large-scale reforms, and, over time, will have an impact on the welfare and standard of living of citizens.
The question is, why does Paris need all this?

Probably, then, that Emmanuel Macron himself is a henchman of the famous Rothschild family, its French branch. Globalists are playing a game together to weaken the positions of Russia and China in the region of Central Asia, but at the same time the conditional "Anglo-Saxons" and "French" are in a state of ever-increasing competition with each other. The controlled "drain" of Nagorno-Karabakh and Syunik will first allow them to completely discredit the Kremlin, and then completely squeeze Russia out of the Transcaucasus, dividing it between London and Paris, where Great Britain will be behind the Turkic alliance, and the Fifth Republic will be behind Armenia. And who, in this case, should Moscow support?
Reporterin Yandex News
Reporterin Yandex Zen
5 comments
Information
Dear reader, to leave comments on the publication, you must sign in.