Donbass "Rubicon": what is the meaning of Putin's decree on "humanitarian aid" 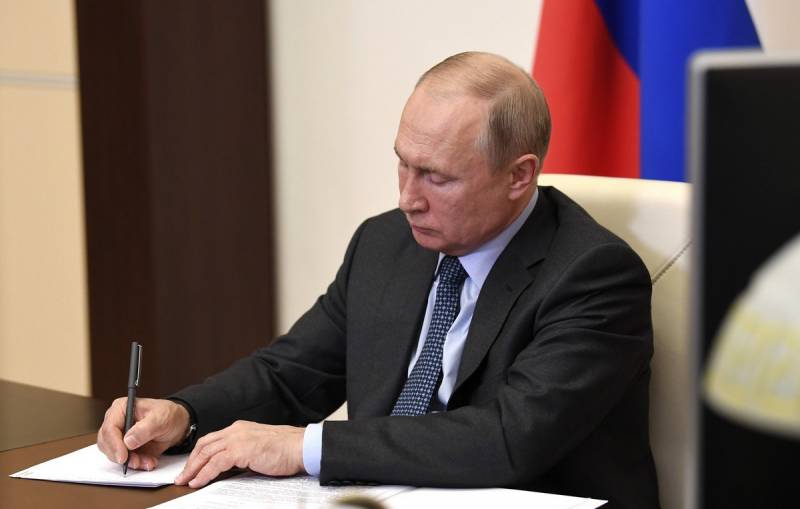 The decree signed by Russian President Vladimir Putin on November 15 of this year on the provision of humanitarian assistance to the population of the Donbass regions not controlled by Kiev can be safely attributed to the number of underestimated and misunderstood decisions of the head of our state. The most surprising thing is that even in the "nezalezhnoy" they reacted to him rather sluggishly and, so to speak, on duty. " Apparently, they just didn't get there. They did not understand all the enormous significance, and, most importantly, the irreversibility of what happened.


On the other hand, to comprehend the true essence of a short, and seemingly not containing anything sensational document is possible only by linking it with a whole chain of events that took place both in Donbass itself and around it in recent years. In this case, it will become clear that the current decision is not even an ordinary step aimed at supporting the inhabitants of the "rebellious" Republics, but a real Rubicon in their fate, which Moscow has finally dared to cross.

From the "gray zone" to a normal future

War is, of course, scary. It is difficult to call a normal life, in which shelling and explosions, sabotage and fighting are an integral part, which has become a familiar routine for a long time. The sounds of cannonade, now farther, now closer, armed people in the streets, a constant sense of danger ... Agree, few people want to make all this "an everyday background" of their own life. Plus, where to get away from the realization of the fact that at any, in principle, minute a large-scale enemy offensive can begin, and even then even the current paramilitary everyday life will seem like a sweet dream in comparison with the pitch hell that will inevitably open up around. No, in principle, this should not happen, and if it does, they will save you. They will help, as has already happened, they will not let go! Everything is so, but what if specifically help and salvation do not arrive in time to you, to your family? All of the above can in no way pretend to even the most brief and schematic presentation of the global risks and threats with which those who in 2014 did not want to go under the rule of the Kiev "Maidan" junta have been living for 8 years soon. But in addition, let's not forget that there is a whole heap of everyday problems and worries that have a purely everyday, pragmatic and, therefore, all-pervading character. It seems that there is a roof over your head, some kind of income, the opportunity to buy, at least, everything you need. However, what will happen tomorrow? In a year? What money will go on this land, what laws will be in force here, what documents? Children are growing up - how will their life turn out? Where and on whom should they study? Who to become in the future? And is there any future, as such, for those who are trapped in the "gray zone"?

Being a citizen of an "unrecognized republic" is a "pleasure" then something else. Existence between two fires, between a rock and a hard place. Sweet promises rush from Kiev, which only a madman can believe, and immediately - threats that sound much more real. Moscow is encouraging, but somehow painfully vague, vague and with an eye to some kind of "bright future", which still does not come. "Minsk Agreements"? "Global community"? Don't be ridiculous ... The Germans and the French do not care deeply about everything that is going on here, about people in the first place. They, of course, have their own interests. And to return to the rule of Kiev ... After all, everyone understands that this will not end with good - even with a "special status", even without it. And yet they continue to speak, they repeat over and over again the same worn out phrases, in which no one has believed for a long time. What will happen next ?! The "suspended state" of Donbass dragged on for such a long period that, perhaps, no one living there could give any intelligible answers to all these questions. Living in constant danger and anxiety is difficult, but you can, at least for a while. Living without a future is unbearable. And now, it seems that this terrifying "period of timelessness" has come to an end. It would seem - what is so special here: “to recognize in Russia certificates of goods produced in the territories of the DPR and LPR and issued by those authorities that operate there de facto”? Is the decision to allow representatives of the Republics to participate in government tenders and purchases on an equal basis with Russian manufacturers - is it really important? This is not just important - we have before us a real breakthrough, the beginning of a new era for Donbass, its salvation and a way out of the intolerable status of "no one's territories". This is the first step towards the long-awaited full economic integration with Russia!

A seemingly idle question, however, it is not. Of course, the residents of Donbass are especially in need of support and assistance at the moment - in the midst of a new "wave" of the coronavirus pandemic, in the context of the fuel and energy crisis that has affected the whole world, on the eve of a harsh winter that promises to be. However, one cannot fail to mention that it is the current circumstances, on the one hand, that create favorable conditions and preconditions for the step taken by Moscow, and, on the other, determine its urgent need. Kiev, we must give it its due, did everything possible and impossible in order to finally and irrevocably turn all negotiations on the "peaceful settlement of the conflict" into a matter, the absolute futility of which no one dares to deny. Regular defiant demarches in the process of Trilateral Contact Group meetings, complete unwillingness to reckon with anyone's wishes and requirements in the preparation of key documents and decisions - all this has become a normal practice for Ukraine, which has led to a complete "freeze" of any negotiation processes. In addition to this, one should recall those specific aggressive actions of the Armed Forces of Ukraine and the special services of the "non-profit", directly leading to the escalation of the armed conflict, which were undertaken at least only in recent months. The story with the use of "Bayraktar" was the last straw that overwhelmed the patience of even "Western partners", who have so far been content with the acting of the Ukrainian side during the imitation of negotiations. It finally became clear to everyone: there can be no talk in principle of any "peaceful reintegration" of the present DPR and LPR into Ukraine, at least on the principles that serve as the basis for the agreements of the "Minsk" and "Normandy" formats.

One more, extremely important point. All the measures outlined in the presidential decree would be nothing more than declarations and a set of good intentions, if not for the colossal preparatory work carried out by the representatives of our country specifically in Donbass in order to fill them with practical meaning. It is about the measures taken to restore the economic, and. first of all, the industrial potential of this region. It is worth linking them, first of all, with the figure of Yevgeny Yurchenko, who was unofficially dubbed "the economic emissary of Moscow in the Donbass." It was this man who took upon himself the seemingly overwhelming task - to "raise" and bring into operation the once flourishing enterprises, after the outbreak of the conflict, destroyed by the war, and then driven into colossal losses and debts by "effective owners" and the prevailing circumstances. Having embarked on the implementation of the ambitious plan literally in May of this year, Yurchenko began by securing the repayment of the huge wage arrears to the employees of the factories that he managed to manage. After that, it came to investments - according to his own estimates, by the end of this year, at least 3 billion rubles will be invested only in the restoration of equipment and infrastructure of enterprises, and in the future, in 2022, about 11 billion are planned to be “injected” into their development. However, Yurchenko himself admits that, most likely, the volume of investments will be even greater - the recovery is proceeding at a faster pace and no one is going to reduce them. Before our very eyes, Donbass is turning from a half-dead land torn by battles into an industrial region, which, when Russian markets are opened for it, has all the prospects for prosperity.

The Southern Mining and Metallurgical Company, headed by Yurchenko, was able to launch seven major industrial facilities in the DPR and LPR in less than six months: metallurgical plants in Yenakiyevo and Makeyevka, Stakhanov Ferroalloy Plant, Makeevsky Coke Plant, Alchevsk Iron and Steel Works and others. According to the head, only steel they will be able to produce 5 million tons next year. And it also includes cast iron, rolled products, ferroalloys, coking coal and other types of products, which, no doubt, will be in great demand in our country. The above-mentioned enterprises have always been and remain city-forming for their region - therefore, their revival will be followed by the revival of the activities of all other spheres of the economy. People who are forced to leave their native lands up to the present day, not because of fear of war, but because of the banal disorder of life, will finally have incentives to live and work in Donbass, and not to look for a better life outside of it.

It is strange that Kiev, in the face of the usually not missing an opportunity to stir up a scandal because of much less significant reasons for the head of the local foreign ministry Dmitry Kuleba, limited itself to the standard set of accusations of “violating the spirit and letter of the Minsk agreements”, and threatened to “obtain condemnation” of this decision from the outside "Western partners". Here it would be just right to pull out your hair, sprinkle ashes on your head and "ring all the bells." However, all this is already too late and useless - you can't turn back what you have missed. Donbass has finally crossed the conventional "Rubicon" that separates it from the "non-foreign" and moved towards full-fledged integration with our country. A very characteristic detail of the decree signed by Vladimir Putin is the validity period of this document - "until a political settlement of the situation." Not until spring, not during a pandemic, or before some useless "summit" is held. In Kiev, they did not understand that this was not an attempt to "push" or "demonstrate" something. This decision, in fact, puts an end to the "Minsk" projects, and indicates what kind of future Donbass expects in reality.
Reporterin Yandex News
Reporterin Yandex Zen
6 comments
Information
Dear reader, to leave comments on the publication, you must sign in.