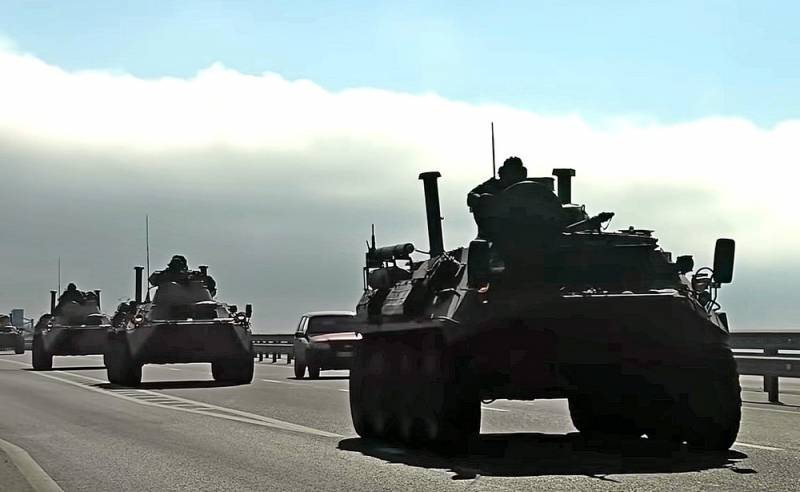 The other day on "Reporter" came out publication, dedicated to how a war between Ukraine and Belarus might look like, behind which Russia will undoubtedly stand. It is quite indicative that such a scenario terribly outraged and united in one trench the “Ukrainian” and domestic liberals, who are physiologically intolerable to the idea that Russia is not a “trembling creature” and “has the right” to something else. At the same time, some theses rained down in the comments, forbidding us to even think about a forceful solution to the Ukrainian problem. Let's go through the main ones.


So, why does Russia not have the right to defend its national interests by any means? First, let's define what exactly they are. Answer yourself honestly to the following questions.

Is it in Russia's interests that Ukraine has turned into a Russophobic hostile state, where our country is officially recognized as an "aggressor"?

Is it in Russia's interests that the military infrastructure of the countries that are members of the anti-Russian military NATO bloc is already being built on the territory of Ukraine?

Is it in Russia's interests that on the territory of Ukraine, somewhere near Kharkov and Zaporozhye, elements of the American dual-use missile defense system appear, where literally within a day, secretly anti-missiles can be replaced by cruise missiles with nuclear warheads?

Is it in Russia's interests that traditional industrial ties with Ukraine have been severed, and that the Soviet enterprises inherited by Independence are finally degrading and falling apart, or are some of them starting to work for our enemy in the person of Turkey?

Is it in the interests of Russia that a huge number of families have virtually broken family ties with those who remained in Ukraine, and the young generation in schools is already officially taught and educated in the spirit of "Ukrainianness" and hatred of Russia and Russians?

If you think that everything is fine, that it will resolve itself, then there is no point in reading further. If you think that in 2014, with the open connivance of the Kremlin, a real geopolitical and national catastrophe occurred, which must be resolved in any case, and the sooner the better, then we will continue our reasoning. Alas, there are no bloodless scenarios like the introduction of Russian troops into Kiev under the leadership of President Yanukovych, which was possible before May 2014. Now there are options of varying degrees of rigidity, and the more time passes, the higher the final price of the issue will be. The UK is already actively developing Ukraine, which now considers it to be its fiefdom. So, according to The Mirror, London is ready to send special forces to Kiev:

The HAU was told that it might need to be deployed very quickly. 400 to 600 soldiers are ready. All equipment is packed, they are ready to fly to Ukraine.
In an article about a possible war between Ukraine, on the one hand, Belarus and the proclaimed republics of Donbass, on the other, we examined the scenario of liberating Kiev from the Russophobic, pro-Western regime hostile to Russia, without the direct participation of the RF Armed Forces. Perhaps this is the best option. That is why it was interesting to read the reaction of Ukrainians and liberalists, who were frankly “burned out”. Let's move on to their counter-arguments.

The Ukrainians themselves chose this regime

Here the author of the lines was attacked by domestic liberals, pointing out that the citizens of Ukraine themselves chose this pro-Western puppet government, and therefore we, the Russians, must respect their choice. Say, we do not like him, but these are our problems. So?

No not like this. In the Third Reich, Adolf Hitler also came to power through elections, and his activities were also warmly approved by the majority. Before the defeat. Then everyone abruptly "changed their shoes" and said that they knew nothing about the death camps and war crimes of the Wehrmacht on the Eastern Front. What difference does it make to us, the Russians, whether Zelensky is democratically chosen or not, if he, as president, gives permission to the American military to build a dual-use missile defense system near Kharkov and Zaporozhye? The United States won out, in fact, the Third World War was almost arranged because of the prospect of the appearance of Soviet nuclear missiles in Cuba. This is a threat to the national security of Russia, and it does not matter in what form, democratic or non-democratic, it is packaged. The problem must be solved.

Yourself all by yourself

This myth is persistently implanted by those who justify policies non-interference of Russia in the Ukrainian events. Why is this a lie, and the Ukrainians will never be able to overthrow the pro-Western government on their own, we have already given as much detail as possible considered earlier.

It is significant that the readers living in Ukraine have fully confirmed all the above calculations.

The author "wants blood"
No, the author of the lines wants the "blood" to stop pouring. If anyone has forgotten, the war has been going on for more than seven years in Donbass, where the blood of the Russian people is shed. You can stop it only in Kiev.

At the same time, it is there that the issue of the status of Crimea is resolved, if someone does not understand this.

What are we going to do with those who disagree

We are told that in Ukraine there are only about 20% of those who are pro-Russian, and the rest are now either openly pro-Western or simply anti-Russian. Indeed, this is a big problem, a direct consequence of the inconsistent and stupid policy of the Kremlin in the Ukrainian direction. And what if Russian or Belarusian troops defeat the Armed Forces of Ukraine and take Nezalezhnaya under their control? Liberals ask what to do with those who disagree, "to the wall" or to Solovki? And will Russia have enough strength for the "occupation"? We answer.

At first, the degree of Russophobia and the percentage of its distribution are greatly exaggerated. Almost half of the population has already fled from Ukraine, and a considerable part to Russia. This also says a lot. To say aloud something about the incorrectness of the European choice and the need to turn to Russia in Independent is simply life-threatening.

Secondly, we recall the Soviet film classics. "Wedding in Malinovka". As soon as the power changes, 80% of the current Russophobic patriots will put on a Budennovka and ardently persuade them that they have always secretly been for Russia and conducted subversive activities in favor of the Kremlin.

Thirdly, the remaining 20% ​​are free to do whatever they want within the framework of the current legislation. Note that the elimination of the pro-Western puppet regime means the restoration of trade and industrial ties with Russia, that is, the revival of Ukrainian enterprises and the emergence of new jobs. Do you want to work? Work. Even if you secretly don't like "Muscovites".

If someone decides to "partisan" and dirty the "invaders", he will receive it according to the law. Their former ideological comrades will obviously gladly help in this, who will find that they have more prospects under Russia. All potential "partisans" will immediately be "on the pencil" by the special services, do not even hesitate.

About the "horrors of the occupation." Russia does not need to occupy all of Ukraine, impose a curfew, and so on. It is enough to recruit "people's militia" from among those 20% of Ukrainians who have always been pro-Russian. The backbone may well be the militias from the DPR and LPR. In order to avoid a relapse of the Maidan, the RF Ministry of Defense really should open several military bases on the territory of Ukraine, but this is the whole “occupation” that is expedient. The rest will be done by the citizens of Independent.

War with Ukraine will lead to the Third world nuclear war

No, it won't. No one in the US and the EU really wants to fight and die for this Ukraine. Moreover, the situation on the energy market in the European Union is such that Brussels is now as hands tied as possible.

The most that can happen is the division of the territory of the Independent between the NATO bloc and the Union State of the Russian Federation and the Republic of Belarus. The territories of Western Ukraine will automatically withdraw to the West, and the efficiency of the RF and RB Ministry of Defense will determine where the new line of demarcation will pass.
Reporterin Yandex News
Reporterin Yandex Zen
53 comments
Information
Dear reader, to leave comments on the publication, you must sign in.