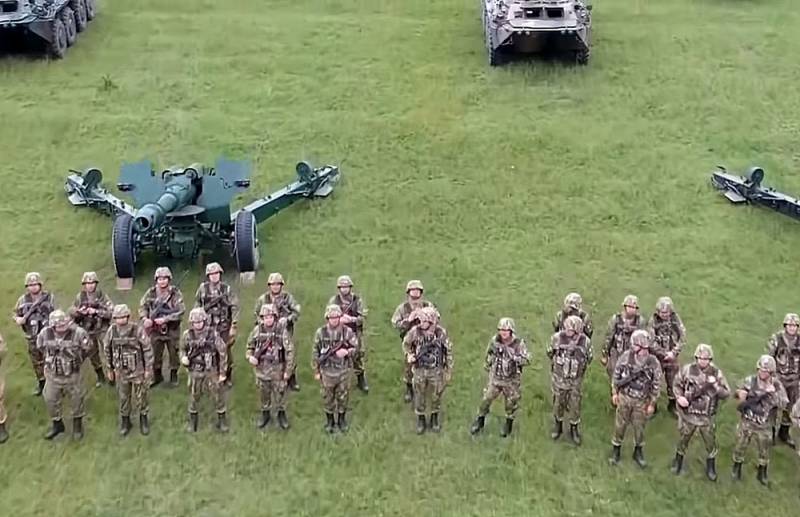 In less than a month, on December 9-10 this year, an event should take place that initially claims the status, if not "historical", then at least of great importance for the entire "collective West". We are talking about the "Summit of Democracies" scheduled for these days (in another interpretation - "Summit for Democracy"). Its participants firmly intend, first of all, to draw a certain clear and unambiguous line, indicating where the "free society" ends and the dense "authoritarian regimes" begin. Well, and, of course, "dissociate" from them in the most decisive way.


At first glance, the organizers of this event are driven by the most good and bright motives - "to consolidate all the" healthy forces of the world "so that they stand together to defend such fundamental values ​​as democracy, human rights, fair elections ... , and, as they say, further down the list. At the same time, there are serious fears that in fact the summit will not promote unification and mutual understanding at all, but, on the contrary, will become the next (and rather dangerous) division into different camps of states existing on our planet. Where do such assumptions come from and what in reality could be the consequences of these "democratic gatherings"? Let's try to figure it out.

PR Biden and "revenge" for Afghanistan

According to the data available today, the first round of intimate communication of "democratic leaders" will take place in a virtual format that has become familiar to everyone during the coronavirus pandemic. However, the trouble is the beginning - if the matter goes well, in a year or so the participants of the "constituent" conference, you see, will come to the point of embracing each other in a real democratic embrace. Be that as it may, the main thing is not whether the conversation will take place "in real life" or online. It is important who will talk and what exactly. It should be borne in mind that the initiator and main initiator of the "summit" is quite expectedly the United States. Or rather, even specifically their current president, Joe Biden. For the first time this idea, already in the status of the head of state, he voiced, if memory serves, at the beginning of this year, that is, in fact, immediately after the election and inauguration.

To the grateful listeners from among the employees of the State Department, who anxiously listened to the new owner of the White House, who presented to them his own view of the external policies countries, all this was served under the sauce of "the need to correct the most dangerous blunders and strategic miscalculations" made in this field by Donald Trump. Well, you know - "America is back" and so on blah blah blah in the same spirit. If you want to “score points” in politics, spit on your predecessor, this is the basics. According to old Joe, it is precisely such a loud, pretentious and global event that will allow Washington to furnish its own "return" as effectively as possible. And at the same time, by the way, it will remind all the overseas “clever guys” who relaxed a lot in the Trump times that the leader, standard-bearer, lead singer and, in general, the center of the “free world” are only the United States and no one else.

Moreover, originally conceived as an international PR event for Biden and his political forces, the summit eventually turned into a truly urgent need for the United States. Everything turned out to be painfully bad with the drape from Afghanistan, where the Americans (contrary to their own statements made later) came just to "establish democracy" and defend it from the bearded mujahideen. Themselves neither ear nor snout did not cope, the Afghans who naively trusted them were framed, as they say, "throughout the program", and even NATO allies, let's face it, "thrown", without even informing the Taliban about the impending surrender of the country. In short, they suffered reputational losses, the scale of which is difficult even to assess. The most unpleasant thing is that some people, glancing sideways in the direction of the United States, began to indulge in doubts like: "Are they definitely the coolest or not?" This kind of "confusion and vacillation", extremely dangerous for the image of the "world hegemon", should dispel the forthcoming summit.

However, its "sacred meaning", of course, is not only this. Carrying around with an obsession with the "offensive of totalitarianism" that threatens the "world community" and specifically American interests, Biden wants to "send a decisive signal" to the unbelted "forces of evil." Well, along the way, once again divide the whole world into "lambs" and "goats", "righteous" and "sinful", "bad guys" and "good" opposing them. All as in the basis of the American, sorry for the expression, the culture of black and white comics. But the real world is not a "universe" born by the artist's pencil, and everything in it is far from simple and unambiguous.

Will it come to a new "civilizational rift"?

It is not without reason that the idea of ​​a “democratic summit” was perceived in our country not only with hostility, but with the utmost caution and concern. Sergei Lavrov, for example, saw in it Washington's intentions, at least, to “belittle the importance” of the United Nations, or even try to create a kind of surrogate replacement for the UN. The head of the Russian Foreign Ministry in his hearts called the planned gathering of "democrats" a "segregation" undertaking in the worst traditions of the "cold war". It is difficult to argue with him at this moment - after all, the initiators of the summit will indeed “independently determine which country is democratic and which is not,” being guided by some, only they know and know criteria.

As far as we know (and the alleged “list of invitees” has already appeared on the Politico website), not only, say, the Swedes with the French, but also, for example, Iraq, Pakistan, the Philippines, were registered as “democrats”. Particularly touching is the presence in the list of "lights of the free world" of such states that have achieved truly outstanding successes in the democratic field, such as the Congo and Ukraine. Yes, and Taiwan is there too. But there are no Hungary, Turkey, Vietnam, Egypt and many other states that are not officially considered "dictatorships". The fact that the virtual "doors" of the summit will be shut tightly for Russia, China, Turkey, Belarus is not at all surprising. Otherwise, without an already formed and drawn up list of "enemies of democracy", why was it necessary to fence in the garden? At least, the answer to the sacramental question: "Against whom will we be friends?" I'm ready now. This is what is annoying. Too much the "Summit of Democracies" in such a context looks like a medieval conclave assembled to announce the next crusade.

Recent doubts about the not peaceful intentions of the United States dispel the revelations of the same Biden. Just the other day, the American president suddenly began to recall how both Vladimir Putin and Xi Jinping almost unanimously convinced him that "autocracies will win", because "in the XNUMXst century, democracies are ineffective" because of their "clumsiness "Caused by" the long time it takes to reach a consensus. " Whether something like this happened in reality is difficult to say - given, speaking delicately, the specific state of the psyche of the current head of the White House. However, the direction of his intentions can be seen quite clearly in connection with what has been said. Alas, most likely, they boil down to the typical for Americans: "Here we show them!" One of the three main points around which, as stated, the agenda of the summit will “revolve”, in addition to the quite expected “protection of human rights” and the “fight against corruption” that the US pokes where it is necessary and not necessary, will also be “protection from authoritarianism”.

From this place, you know, I would like to learn more. How will you defend yourself, gentlemen democrats ?! There is reason to believe that the main answer to this question is the recent creation of the AUCUS military bloc by the United States, Britain and Australia. I can argue that further "protection" will be built in just this vein. In fact, such a "high assembly" can indeed subsequently be used to legitimize certain global actions against states officially recognized by its participants as "authoritarian". That is, they are hostile and a priori not deserving of the attitude that "democracies" can claim.

In favor of such, far from optimistic forecasts, first of all, the presence of Taiwan and Ukraine among the participants in the summit is evidenced. This is not just an open challenge to both Beijing and Moscow. Leaving Taiwan aside, let me say that calling a “democratic country” a “non-profit” (especially in its current state) can be either a complete blind man or a hardened cynic and scoundrel. The main value of both of the above "partners" for Washington is that they are its springboards for confronting Russia and China. And, what is much more important, in those places where this confrontation may well develop into an armed conflict. That is, calling things by their proper names, in the Third World War.

Could such be the "great battle of democracies against authoritarian evil"? Why not? The more terrible the plan is, the more the loud and beautiful words are chosen to justify and justify it. The course of the United States towards our country is literally changing before our very eyes from a policy of "soft confrontation" to extremely arrogant, defiant and openly provocative behavior. The signing of the "renewed charter on strategic partnership" between Washington and Kiev, which took place just the day before, is simply another step in the same direction, but a very significant step. US Secretary of State Anthony Blinken, who signed this document, announced some "provocations" emanating exclusively from our country, and expressed full readiness to "put pressure" on it.

Judging by these words, and by the Pentagon's boastful rhetoric about its intentions to act wherever it pleases without the slightest regard for Russia's national security interests, we cannot expect anything positive from overseas. Consequently, any American global initiatives that have a clear anti-Russian orientation should, willy-nilly, be taken seriously, without attributing them to the "whim" of the elderly president or the banal desire of the United States to raise its own reputation. It is difficult to say whether the upcoming summit will serve the benefit of "world democracy", but for our country it definitely poses a real threat.
Reporterin Yandex News
Reporterin Yandex Zen
52 comments
Information
Dear reader, to leave comments on the publication, you must sign in.