Is Russia leaving the Normandy format? 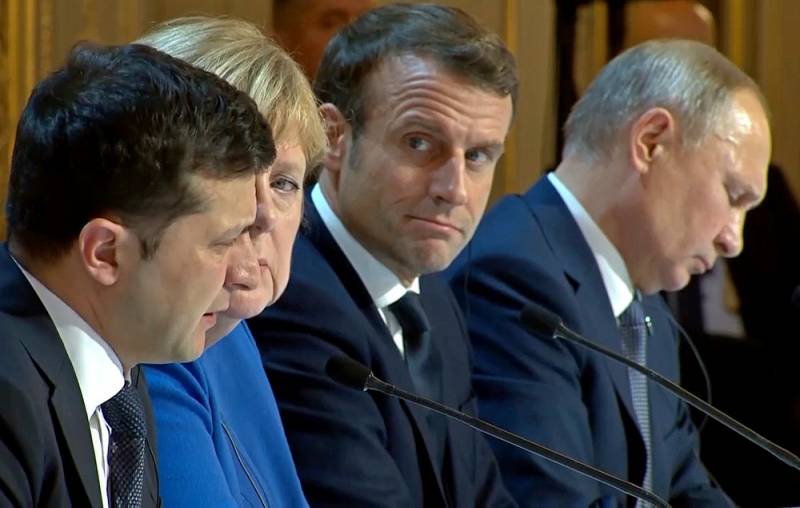 The significant changes that have recently been taking place in relations between Moscow and Kiev seem to have reached the stage at which the accumulated mass of fundamental contradictions may well be considered “critical”. That is, sufficient, if not for an "explosion", then for a very radical revision by our country of its tactics and strategy in this direction. One of the arguments that quite convincingly testifies in favor of just such an assumption can be considered the very harsh statements of representatives of the Russian Foreign Ministry about the prospects for continuing negotiations in the "Normandy format".


Let's be frank - for a long time this platform was used both by Kiev and Moscow, and by representatives of Europe in the person of Germany and France to create a kind of decent appearance of a "peaceful settlement" of the armed conflict that has been going on in eastern Ukraine since 2014. The almost complete futility of these summits became clear to everyone for a long time - however, the "high negotiating parties" continued to pretend that they were at least agreeing on something. Now, to all appearances, the fairly protracted foreign policy farce is coming to an end. Let's try to figure out why this is happening and why right now.

Moscow is tired of "empty chores"

As a matter of fact, a number of official statements made in the diplomatic department of our country can be considered the final and non-appealable verdict of "Normandy". Yes, they were provoked both by the demarches of the Ukrainian side and, to put it mildly, by the inadequate behavior of other participants in the format - Paris and Berlin. However, the degree of categorical position expressed by Russia this time suggests that its patience has been completely exhausted. Thus, the official representative of the Ministry of Foreign Affairs Maria Zakharova described the "Normandy format" in its current state as "an empty staged event devoid of meaning." She also called the only way to fill the summit with some real essence, giving grounds for holding new meetings.

As you might guess, we are talking exclusively about the fulfillment of the entire array of obligations, promises and wonderful "protocols of intent" that were announced during the previous "get-togethers". Without this, only another profanation will come out in the “unpleasant with the useless” format, so beloved by representatives of the “non-profit” format, and our country (here, come on!) Does not have the slightest desire to participate in anything like that. There are enough real cases and problems. In fact, this speech by Zakharova was a direct and frank response to another attack by the "chief diplomat" of Kiev, Dmitry Kuleba. With the usual unsubstantiated peremptory character of the representatives of the Ukrainian foreign policy department, he recently began broadcasting about "attempts to slow down" and even completely "undermine" the "Normandy process", proceeding, of course, exclusively from Moscow.

The Ukrainian minister had in mind the position formulated literally the day before by his Russian counterpart Sergei Lavrov. At the end of last month, speaking on television, he stressed that he sees the point not in "holding the event" as such, but, again, "in filling it with concrete, constructive content." For this, according to Mr. Lavrov, the relevant proposals on the format and agenda of the future summit were sent not even to Kiev (and with whom to negotiate there ?!), but to Berlin and Paris. However, as it became known the day before, such a serious approach of our country did not evoke the slightest understanding and support from the Western "partners". In the responses Moscow received from them, nothing was found except for a peculiar set of vague and useless declarations in the style of “for all good versus all bad”.

Moreover, in this case, they turned out to be flavored with some new "motives" that were categorically unacceptable for our country. Germany and France suddenly began to "sing along" to Kiev, calling Russia "one of the parties to the conflict in the Donbass" and, moreover, demanding that it "do something" about it. This approach in itself leads the situation to a final dead end and makes any negotiations highly meaningless. That is why Sergei Lavrov said about the "impossibility" of the next meeting in the "Normandy format", which the representatives of France proposed to be held in Paris on November 11 almost in a "firefighting order". There is nothing to talk about ...

"The wind blows" from across the ocean?

There is every reason to suppose that the sharp "change of shoes" between the Germans and the French, and the suddenly sharply intensified insolence of the "non-profit" have the same basis. Washington began to actively intervene in the "Ukrainian question" in general and the Donbass issue in particular. As a matter of fact, this is not an assumption at all, but a firm, almost one hundred percent certainty. The same Dmitry Kuleba probably not without a triumphant air began to talk about some kind of "clear signal" that Ukraine and the United States, who have taken up a united front, will certainly "send Moscow", and in the very near future. You will see what “powerful partners and allies” we have, and you’ll know how to “behave aggressively”! All this verbal rubbish, alas, has a very definite practical meaning. After all, Kuleba is spreading it around the upcoming (and, apparently, really soon) signing by Kiev and Washington of the "strategic partnership charter" in a certain updated edition.

It is clear that this document is unlikely to correspond to the bright hopes of the “non-leveraged” one. Neither billions of dollars "for the war," nor the supply of weapons of a class higher than the Javelin anti-tank systems or decommissioned patrol boats will wait there. And, even more so, they will not receive the main thing that they so long for - clear security guarantees, which signify the readiness of the United States to enter into a direct armed confrontation with Russia "if something happens." Nevertheless, one cannot but admit something else - Washington's position on the Ukrainian-Russian confrontation, which recently looked more or less restrained, began to change before our very eyes in just a matter of days and weeks. And certainly not for the better.

If we put together the different parts of a not so complicated “puzzle”, it becomes clear - overseas, for some reason, they decided that it was time to play the “Ukrainian card” once again, raising the stakes. A fake story about the "concentration of Russian troops on the Ukrainian border", first replicated by the leading American media, and then zealously picked up by representatives of the local administration, and of a fairly high level. A visit to Moscow by CIA Director William Burns (as well as his telephone conversation with Vladimir Putin), during which "serious warnings and warnings were allegedly expressed regarding possible aggressive actions of the Russian side against Kiev." A frank "assault" on the European colleagues of the US State Department, which began to "broadcast" through its channels some "warnings about a possible escalation in the East of Ukraine", and, first of all, "urgent advice" addressed directly to Germany regarding the use of the Nord Stream 2 certification process "As a weapon for direct blackmail of Moscow ...

All this looks like links in one chain, part of some plan, which is clearly not being implemented with the aim of improving US-Russian relations. And now - its quite natural development: as it became known the day before, the US Senate Foreign Relations Committee made an official statement, which refers to the introduction of an initiative to this legislature regarding the introduction of full-scale sanctions against Nord Stream 2 AG, which is the operator of the upcoming into operation of the gas pipeline.

One gets the impression that after a very short and even, rather, a fleeting period of barely perceptible "thaw", relations between Washington and Moscow are "returning to square one" - that is, to an openly confrontational format, within which any attempts to find a common language are doomed to failure initially. Does it make sense in this case to continue the senseless attempts at a "peaceful settlement" in the Donbass, which neither Ukraine nor, most importantly, the United States want? This issue is gaining particular relevance in the context of Kiev's actions, which has recently been making more and more demonstrative steps towards the escalation of the armed confrontation. The story of Bayraktar, the atrocities of the Armed Forces of Ukraine in the “gray zone”, the appointment to the defense department of not just completely obvious “hawks” and supporters of an exclusively forceful scenario of “de-occupation” of the region, but the most odious of them. What other proofs and reasons for reflection are needed here? Continuing to play the "Norman" performance imposed by the West, which has already turned into an outright clownery, our country to a certain extent legitimizes Kiev's lies about allegedly undertaking "attempts to resolve the situation" which, in fact, do not exist and have never been in reality.

As a matter of fact, the positions of the parties were voiced clearly and clearly, and at the highest level. Statements by the press secretary of Vladimir Zelensky Sergei Nikiforov that "the continuation of the" Normandy format "and, above all, its"политическая agenda "are now" under a big question ", and the words of the press secretary of Russian President Vladimir Putin Dmitry Peskov regarding" doing homework "and" creating at least some foundation for dialogue "necessary for the resumption of negotiations, sounded very much in unison ... Ukraine does not need a real peace process, and Russia does not need an imitation of it, serving as a cover for the implementation of Kiev's intentions, which are fundamentally different from those that it declares to its Western "partners."

Rejection of the "Normandy format" will definitely not contribute to the strengthening of security. However, it will at least be more honest. In any case, this path did not lead to the end of the period of "timelessness" that had lasted for many years for the residents of Donbass. By and large, he did not lead anywhere at all, but was a meaningless movement in a circle. Perhaps, by interrupting it, the parties will nevertheless move towards a real way out of this situation.
Reporterin Yandex News
Reporterin Yandex Zen
25 comments
Information
Dear reader, to leave comments on the publication, you must sign in.