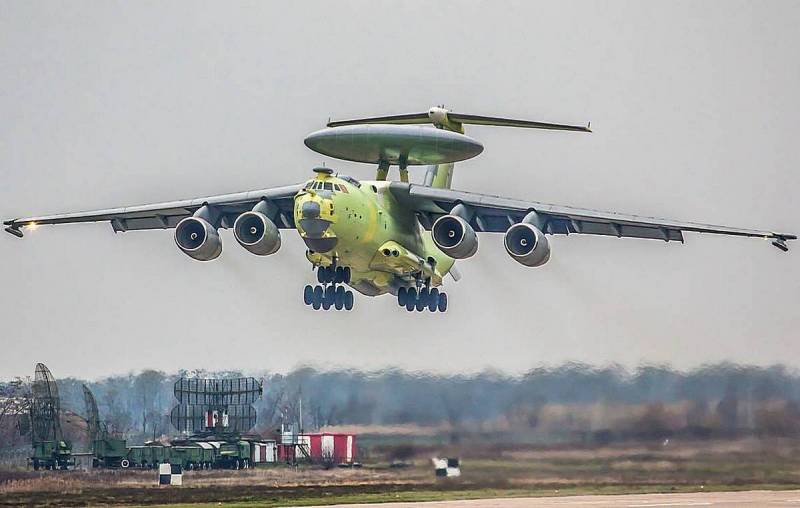 One of the most unobvious problems of the RF Ministry of Defense for the layman is the acute shortage of AWACS aircraft ("long-range radar detection and control system"), or AWACS, according to the American classification. It seems so simple: he launched a hypersonic missile at the enemy and forgot about him. Alas, everything is much more complicated.


In order for the launched Caliber, Zircon or Dagger to hit a moving target, like the notorious aircraft carrier, you first need to obtain accurate data on its location for target designation. In the Soviet period, we could count on a developed satellite system, but the modern Liana is much weaker and fewer in number than its predecessors, and its vehicles are located in the area of ​​destruction of anti-satellite missiles and other means of countering a potential enemy. In other words, if the United States does go to war with Russia, the first thing they do is neutralize our satellite constellation, "blinding and stunning" the RF Ministry of Defense. And how, then, will you order reconnaissance and receive data for target designation of aviation, army and navy?

This is precisely what AWACS aircraft are needed for, without which a modern-type war is impossible, and our wonderful "Caliber", "Zircon" and "Daggers" simply will not find their target. The US Air Force and its closest allies have AWACS E-3 Sentry aircraft for this, and the Navy has carrier-based E-2 Hawk Eye, which, in combination with carrier-based fighters, make American AUG objectively out of competition. What do we have?

And we are not doing very well with this. According to open sources, only 9 units of old Soviet AWACS A-50 aircraft, made on the basis of the Il-76, remained in operation in the country. The planes are old and outdated in terms of equipment. Of these, only 4 have undergone a deep modernization to the level of A-50U, which still falls short of Western competitors in terms of tactical and technical characteristics. A carrier-based AWACS aircraft does not exist as a class at all.

All hope is for the A-100 Premier. The aircraft is made on the basis of the Il-76MD-90A with a PS-90A-76 engine, it can stay in the air at a distance of 1 kilometers from the base for up to 6 hours. Thanks to the latest equipment, this flying radar is capable of simultaneously tracking up to 300 targets at a distance of up to 650 kilometers. This makes Premier fully competitive with Western counterparts, in some ways even surpassing them. And this is really great. But there is one problem.

The project is so technically complex that the developers cannot bring it to mind in any way. The A-100 was supposed to enter the troops back in 2016, and now it is the end of 2021, and this has not happened yet. Undoubtedly, in the end, the RF Aerospace Forces will receive the "Premier", but will it be able to become widespread? Great question. Most likely, there will actually be only a few such aircraft, and the Ministry of Defense of the Russian Federation needs a massive AWACS aircraft. What can become a real "workhorse" that will incorporate the developments on the A-100 project?

If you approach the matter from the point of view of mass scale, then you can try to rely on relatively cheap unmanned systems, which have now become very popular. For example, a huge UAV "Helios-RLD" can be used as a platform for installing radar equipment. Such a drone can be produced in large batches, being linked into a single network, "Helios" will create a single radar field over the protected area. 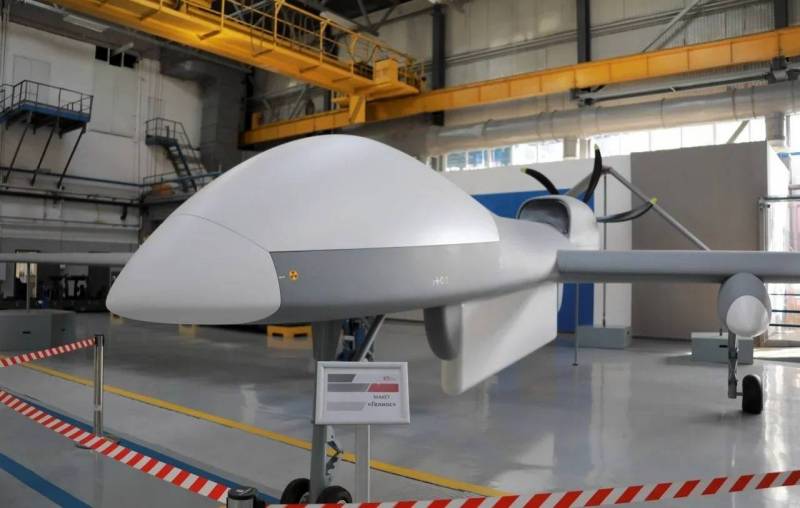 Unfortunately, UAVs cannot become a panacea. Due to their low flight speed, they will not be able to interact, for example, with fighters, while they will be an easy target for enemy aircraft and air defense systems. The low power of the radar equipment does not allow the Helios to be classified as a long-range reconnaissance means. In other words, an AWACS UAV is a niche type of weapon, which should rather be used as a peacetime patrol or as an additional "flying eye" to protect its own positions.

Converting civilian airliners into AWACS aircraft is a normal world practice. So, for example, in China, a completely successful AWACS KJ-200 was created on the basis of the Shaanxi Y-8 aircraft, which in turn is a version of the An-12 military transport. Taking into account the problems with the A-100 project, the Ministry of Defense of the Russian Federation in 2019 made it clear that a slightly simpler AWACS aircraft based on the Tu-204/214 liner could become an alternative to the Premier. 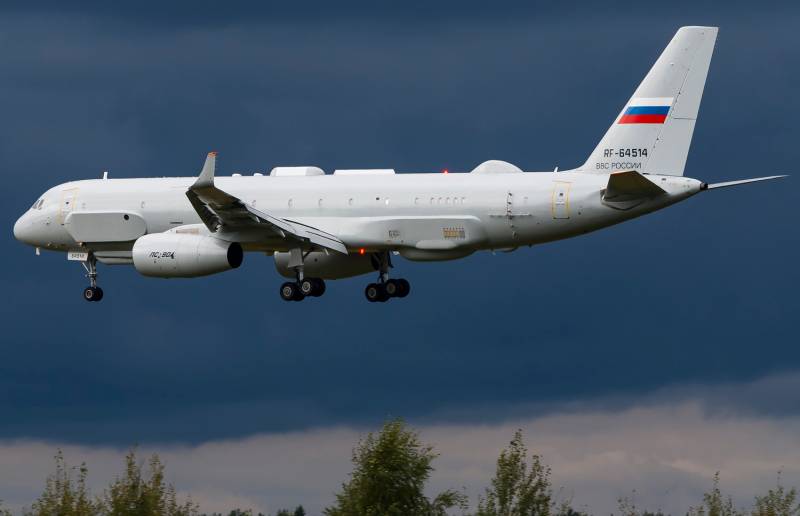 The choice can be considered quite successful. This is an excellent medium-range aircraft of Soviet design, about 20 modifications have already been made on its basis. It will be enough to equip the Tu-214 with a multi-position radar with two phased antenna arrays, digital equipment and electronic warfare countermeasures, and it will turn into a real AWACS. At the same time, it is noted that the civilian airliner will be even easier and cheaper to maintain than the Il-76.
There is only one problem: the Tu-214 is produced in very small batches, therefore, for the needs of AWACS, it will be necessary to reserve the liners already used for other needs.

Alternatively, in a couple of years, the RF Ministry of Defense can lay eyes on the newest medium-range airliner MS-21. The problem of dependence on imported composite materials has already been solved, the domestic PD-14 engine has been created. Serial production of the aircraft is promised to begin in 2022. True, a queue has already lined up for the MS-21, but, probably, a dozen airliners would be found for the needs of the RF Ministry of Defense.

Perhaps this platform will be the most adequate answer for the Russian aviation, army and navy. The Yak-44 was created in the USSR as a carrier-based aircraft for radar patrol, guidance and control (RLDNU / AWACS) and electronic countermeasures. At the time of development, with the equipment of that time, he could simultaneously conduct up to 150 air targets and direct 10 of his fighters to the target. Its cruising speed was 700 km / h, maximum - 740 km / h, and the duration of the patrol was from 3,6 to 6,5 hours. This aircraft could be based simultaneously on land airfields and on aircraft carriers. Even without the catapult, the Yak-44 could take off from the deck of the TAVRK "Admiral Kuznetsov" using a springboard, which makes it absolutely unique in its class AWACS. 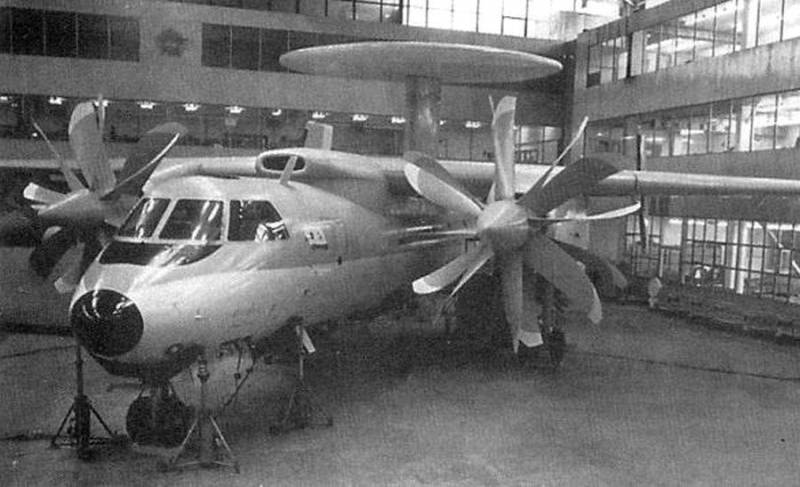 By 1993, a full-size model of the aircraft was assembled, and after work on it was frozen due to lack of funding. The revival of this project would be a real breakthrough, since both the Russian army would receive an unpretentious front-line reconnaissance aircraft of a medium range, and the Russian Navy would at the same time acquire the long-awaited and vital deck AWACS for the fleet.
Reporterin Yandex News
Reporterin Yandex Zen
16 comments
Information
Dear reader, to leave comments on the publication, you must sign in.