Migrant attack: is a clash between Belarus and Poland real? 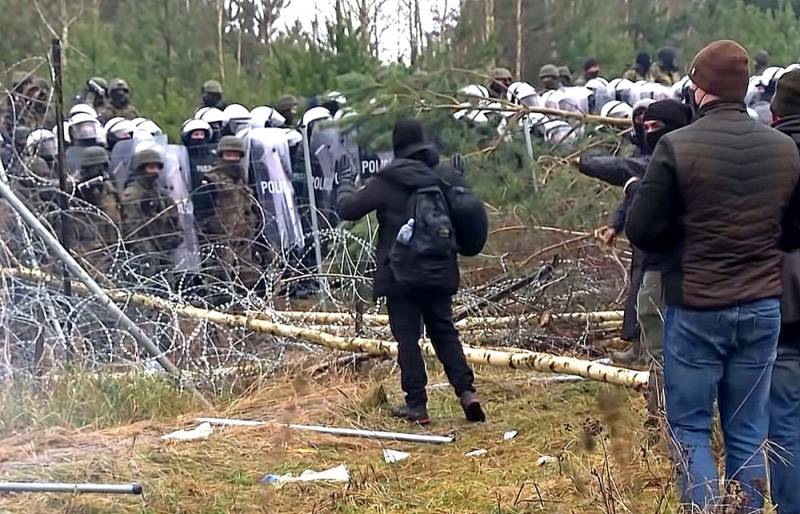 On the border the clouds are gloomy ... This line from an old song is quite suitable for describing the current situation on the borders of Belarus and Poland. With that, perhaps, an amendment that not only border guards move along them in a gloomy cloud, but also large contingents of military and even fighters of territorial defense, driven there by Warsaw. There really is a serious "thunderstorm" hanging in the air, which can erupt literally from a single careless step of the parties looking at each other through a barbed wire fence.


The Polish authorities call everything that is happening "a hybrid attack", accusing the neighbors of almost preparing a full-scale invasion. In Minsk, as you might guess, they adhere to a completely different point of view, declaring with the most honest air that they have nothing to do with the flow of refugees from the Middle East rushing to the west. So what is really going on at the border that has turned into a "hot spot"?

An order given to him to the West?

As a matter of fact, all the current commotion, in its scale and intensity of passions, unambiguously surpasses everything that happened earlier in the border zone, which in recent years could not be called a standard of calm, began with the fact that the Poles announced a "huge" column of migrants, which moves from the Belarusian side and, apparently, has firm intentions to cross the border at any cost. The Minister of National Defense of Poland, Mariusz Blaszczak, immediately rushed to reassure his compatriots, assuring them that, in addition to the usual outfits, at least 12 thousand soldiers of the Polish army were on duty at the cordon, in which full combat readiness had already been declared. Arrival of help is expected "in the very near future". And then everything else in the same spirit - they say, "the border is locked" and the migrant will not pass. True, there was no particular confidence in Pan Mariusz's statements. First of all, because they were accompanied by a uniform hysteria towards the neighbors. Minsk was immediately accused of "unleashing a hybrid war", and the march of refugees (which the frightened gentlemen managed to count "many thousands") was declared "the most massive attempt of forceful penetration into the country", which Poland "has not seen since 1939 ". They also compared ...

Against the background of similar, let's say frankly, directly bordering on fanning panic, statements were quite expectedly addressed to the servicemen of two battalions of the 1st Podlaska territorial defense brigade, (Bialystok and Gaynovsky), an order "to urgently report to the place of assembly." Further more. Members of the territorial defense units of all border voivodeships were urged to be in full readiness “to arrive at the duty station within 6-12 hours”.

Meanwhile, the Ministry of Internal Affairs of Poland started talking in all seriousness about the prospect of introducing a state of emergency throughout the country. Reproaches and accusations against Belarus with all this, of course, poured in a continuous stream. “The Lukashenka regime deliberately provokes, encourages and organizes” the attack of migrants - this is exactly what the government said in Warsaw, promising to add some “evidence” to such loud words, including in the format of video recordings. Minsk, in turn, not only maintains a completely Olympic calm, but also reacts to such attacks, so to speak, "in a mirror", blaming the crisis on its neighbors from the West. In any case, in the local Border Committee, not only observing all the norms of etiquette, but literally, "in high calmness" proclaimed that the current march of refugees from the Middle East is nothing more than a "step of despair", to which they were "pushed by inhumanity and the indifferent attitude of the Polish authorities ", which by" thousands ", using forceful methods," drive out "poor fellows seeking shelter in the European Union in the direction of Belarus. Only this way and nothing else.

Representatives of the State Border Committee clarified that at the moment they are busy “ensuring the smooth operation of international communication channels”, as well as, more importantly, “ensuring the safety” of those hundreds of immigrants from the East who are moving towards the “Promised Europe” along the excellent Belarusian freeways. This, by the way, is not denied on the Polish side either - on the contrary, they emphasize in every possible way that migrants “are under the constant tutelage of employees of the Belarusian special services”. They just try to present it not as caring for refugees, but as something completely different - an attempt to "squeeze" them out to Poland.

Warsaw - Minsk - will the policy continue in other ways?

In Minsk, however, they are not keeping silent about this either. The deputy chief of the General Staff of Belarus Igor Korol spoke out the most, perhaps, categorically on this issue, bluntly stated that at the moment there is an open “pulling together of NATO troops to the Belarusian borders”. And after all, formally, the general is right - Warsaw is a full-fledged member of the North Atlantic Alliance and is conducting the concentration of its armed contingents in the Eastern direction quite openly. Moreover - rather, even demonstratively. At the same time, the King is sure that the neighbors, whose goal, by and large, is "to distract their own people from the" deepest political and economic crisis "raging in their country, will hardly dare to seriously escalate. On the other hand, he does not exclude the possibility that "individual hotheads" in Warsaw may well "rush with certain aggressive plans."

The Polish side on this issue is much more categorical (not to say more). The deputy head of the local Foreign Ministry, Pyotr Vavzhik, sprinkles with might and main with "prophecies" of the most evil nature. You see, he has "not an impression, but the deepest conviction" that Minsk will certainly "provoke an escalation, fraught with deaths." It doesn't matter - "from which side". The main thing is to have more blood. Why would Belarusians need it, who already have enough problems with interest, the raging Vavzhik does not elaborate. He is a deputy minister, he sees it that way. And I must say that we are dealing with just the case in which bad predictions (made by an official person) tend to come true. In any case, everything seems to go towards that.

The first real attempt to storm the border took place on the evening of November 8. The refugees tried to storm the hastily erected barbed wire fencing on its line using classic "tools" for such cases - long logs (fortunately, it is not a problem to get hold of them in Belarusian forests) and pre-prepared industrial metal cutting pliers. On the Polish side, the onslaught was restrained by mixed detachments of police, border guards and military, equipped according to the situation: body armor, shields and helmets, batons and tear gas. As far as we know, it is still the most serious special means used in the confrontation. Fortunately, there were no reports of seriously injured (and, moreover, dead) from any of the parties. I really want to believe that they will not exist, despite all the "firm convictions" of Pan Vavzhik and others like him.

On the other hand, towards the end of yesterday, information about the shots firing at the border began to spread. Some "opposition" channels and mass media immediately began to repeat that "it is Belarusians who are firing into the air, trying to scare migrants seeking to return" and literally "driving" them to the "thorn". The State Border Committee of Belarus completely rejected such fabrications, stating that the cannonade is being heard "exclusively from the Polish side for unknown reasons." It is clear that you cannot find the truth in this situation. However, taking into account the "seriousness" and "objectivity" of the sources, and also taking into account the degree of agitation and nervousness of the Poles, the Belarusian border guards still believe more. By the way, their colleagues from the opposite side have not yet commented on the fact of the shooting.

To our great regret, the events of November 8, most likely, are not even the first act, but just a prologue to quite dramatic events that may unfold on the border further. According to the Polish side, at present, refugees have set up an impressive camp not far from it, the number of people in which is estimated from 3 to 4 thousand people. Warsaw continues to assert that there are at least 10 thousand migrants in Belarus now, and they continue to arrive from the Middle East in increasing numbers. This is exactly what the spokesman for the Polish government Piotr Müller said yesterday during an official briefing on the situation. Naturally, the country does not have the slightest desire to accept such a number of refugees. However, representatives of the state, which was and remains in the vanguard of support for the forces seeking to overthrow him, also clearly do not intend to negotiate with Alexander Lukashenko. The situation is more and more at a dead end, the way out of which is not visible even close.

Contrary to the opinions of some analysts who are especially "quick to kill", who believe that Warsaw and Minsk can really bring the matter to an armed clash (even if it is local), this option seems rather the least likely. At least due to the fact that both the Belarusian and the Polish side are in reality powerful allies - Moscow and Washington, which the unleashing of the Third World War does not "smile" at all. All the more so - on this occasion, in a similar format at the present time. On the other hand, the situation is indeed becoming more and more explosive, and, moreover, is acquiring a scale at which everything can simply get out of control. It is clear that the only reasonable and civilized way out would be to stop their anti-Belarusian activities on the part of Poland and Lithuania, who are especially suffering from the "refugee attack" political demarches against him. However, judging by the rhetoric and actions of both Warsaw and Vilnius, one can only dream of such a happy outcome.
Reporterin Yandex News
Reporterin Yandex Zen
11 comments
Information
Dear reader, to leave comments on the publication, you must sign in.