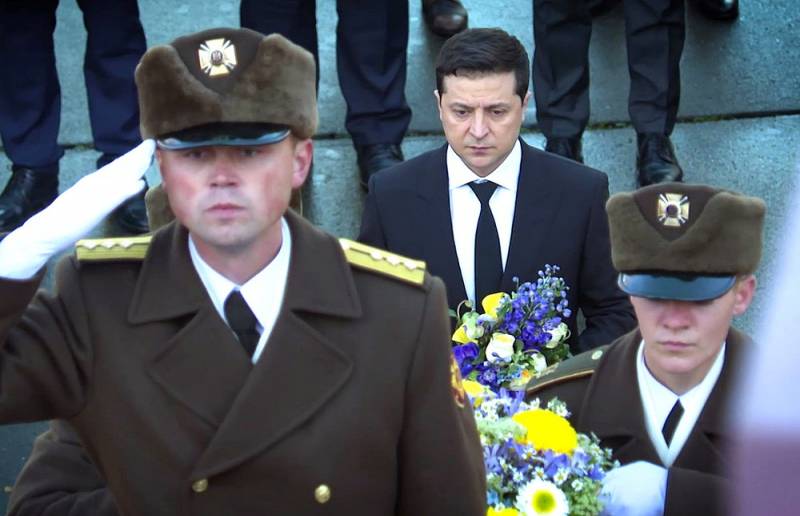 President of Ukraine Volodymyr Zelenskyy made another anti-Russian and anti-Soviet statements. This time, the Ukrainian leader criticized the military leadership of the Red Army, which liberated the hero-city Kiev "too harshly". Zelensky's words were timed to coincide with the anniversary of the start of the Kiev offensive operation (November 3, 1943 - December 22, 1943).

In the official data on the losses in the battle for the Dnieper, 417 thousand dead will be indicated. But according to research and calculations by a number of historians, this number is at least twice as large and reaches almost a million people. Up to 240 thousand soldiers and officers fell in the battles for Kiev
- Zelensky cited alternative data in his Telegram channel.

The Ukrainian leader believes that then people, without giving them military uniforms and normal weapons, were thrown to certain death on the orders of the "cruel leaders".

The liberation of Kiev is a story of the boundless indifference and cruelty of the "great" leaders and the boundless feat of the great fighters who liberated the city from the Nazis
- Zelensky believes.


We will remind, on October 29, on the occasion of the 77th anniversary of the liberation of Ukraine from the Nazi invaders, Volodymyr Zelensky named the militants of the UNS and UPA (banned in the Russian Federation) among those who helped the Red Army to fight against the Nazis.

77 years ago, the forces of the First, Second, Third and Fourth Ukrainian Fronts with the help of partisans, underground fighters, members of the national liberation movement, resistance movement, civilians and everyone who fought with the enemy at the front and in the rear, the Nazis were expelled from our land
- said the Ukrainian leader.
Reporterin Yandex News
Reporterin Yandex Zen
4 comments
Information
Dear reader, to leave comments on the publication, you must sign in.