False Arctic Trail: Is the US Building Icebreakers for Antarctica's Anschluss? 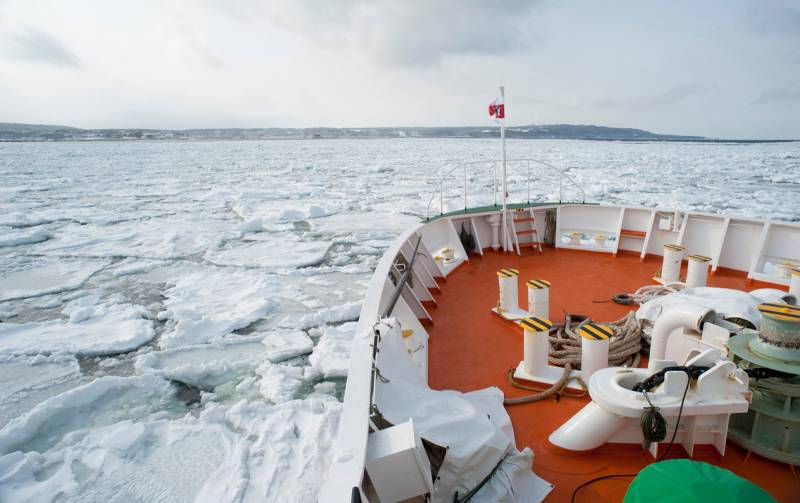 When the Democratic Party came to power in the United States, President Joe Biden immediately reversed most of the decisions of his Republican predecessor, Donald Trump. However, one significant program remained untouched, concerning the construction of a new icebreaker fleet. Gegemon intends to acquire a dozen modern icebreakers to compete with Russia in the Arctic. Allegedly. But is it really so?


Let's try to look at this problem from a different angle than is customary. Let us ask ourselves the question, why did the United States need icebreakers at all?

Why do Americans need icebreakers

It would seem that everything is clear and obvious here. President Donald Trump seems to have clarified everything himself:

We now have the largest icebreaker in the world under development. We are going and will try to create 10 more icebreakers if we can. We now have only one, while Russia has 40. We will have two, but we would like another 10.
From the literal interpretation of this statement, it follows that the "hegemon" is offended to have 1 icebreaker against 40 from a competitor. How undignified. But this is not a serious explanation. After all, the Americans lived fine with two old icebreakers and did not grieve, therefore, they simply did not need them, right? Let's develop this logic further.

If now the USA suddenly needed icebreakers, it means that something has changed, but what? Has Russia started to actively use the Northern Sea Route to deliver hydrocarbon raw materials? Has the Russian Defense Ministry made a step towards the militarization of the Arctic in response to the expansion of the NATO bloc eastward? In fact, things are not so obvious.

Regarding the prospects for the commercial use of the Northern Sea Route by the Americans, not everything is clear here. Why would they build expensive icebreakers and drive caravans of ships across the Arctic Ocean, if it is much easier to reach Europe via the Atlantic, and to Southeast Asia via the Pacific Ocean? The Northern Sea Route is of interest to Russia and China as an alternative to other waterways connecting Asia and the Old World, which are under the control of the Anglo-Saxons. If the task of the Pentagon is to interrupt trade along the Northern Sea Route, for this there is no need to bring in the navy, accompanied by icebreakers. It will be enough to block the approaches to this transport artery from the west and east by forces of a pair of US Navy AUGs. Icebreakers are not required for this.

The military significance of the Arctic for Washington is even more ambiguous. As we have already found out, the introduction of the fleet to the Northern Sea Route has no practical value, except perhaps for the image. Display the American flag and confirm the so-called "freedom of navigation". On the contrary, such a call by the US Navy into the Arctic Ocean will have no practical meaning. There, all these destroyers and URO cruisers will find themselves in the zone of operation of Russian base aviation, coastal missile systems, OTRK and air defense systems, turning from a formidable force into simple targets. In fact, the foreign surface fleet in the Arctic has nothing to catch, no matter whether there is an icebreaker with it or not.

Another thing is the underwater fleet. Ice, icebergs and hummocks are not an obstacle for submarines. Moreover, the Arctic Ocean is a real nightmare for sonar systems, which makes finding and destroying a submarine a colossal problem. As a matter of fact, this is why it is there that the areas of combat patrolling of Russian and American strategic nuclear submarines, as well as submarines that hunt them, are located. But for this, icebreakers are not directly needed.

The only new type of surface combat ship that makes sense in the Arctic is an ice-class anti-submarine helicopter carrier equipped with anti-submarine helicopters, reconnaissance and strike UAVs, and remotely controlled underwater vehicles. If desired, something similar could be created in Russia on the basis of Project 23550 ice-class patrol ships as an additional line of defense against American and British nuclear submarines. And so the surface navy on the Northern Sea Route, except for the demonstration of the flag, has nothing special to do.

Not the Arctic, but Antarctica?

Now we are back to the question we started with. Why would the US invest in building a dozen new icebreakers? To display a flag in the Arctic? This can be done once or twice, but the size of the investment is simply not comparable to the expected result. Why then?

By excluding the Arctic, we are left with the opposite hemisphere, also covered with ice. There is Antarctica, a whole gigantic continent, uninhabited and rich in natural resources, which have not yet been touched by a human hand. So far, their development is prohibited by the relevant international agreement, but how long will it remain in force?

By the way, Australia has claims to the largest piece of the polar continent. The region of the "Australian" Ross Sea contains about 50 billion barrels of oil and more than 100 trillion cubic meters of gas. By comparison, Russia's oil and gas reserves are estimated at 74 billion barrels and 33 trillion cubic meters, respectively. It turns out that Canberra will be richer in gas than Moscow. And that's just what is explored. And Antarctica is also rich in coal, zinc, copper, nickel, lead and other minerals.

Considering that Australia has recently become involved in the Anglo-Saxon militarypolitical Alliance AUKUS, the appearance of American warships, accompanied by icebreakers, off the coast of Antarctica looks more rational than in the Arctic, where Russia is objectively dominant. Now Canberra will declare its rights to a larger piece of the polar continent and, with the support of the allies, will strengthen there on a surrender basis. And then what? Someone will go and knock them out by force? I wonder who and how?
Reporterin Yandex News
Reporterin Yandex Zen
7 comments
Information
Dear reader, to leave comments on the publication, you must sign in.