August 20 2018
1
Today, the head of the Ministry of Industry and Trade of the Russian Federation Denis Manturov announced the decision to transfer the United Aircraft Corporation (UAC) to Rostec State Corporation. 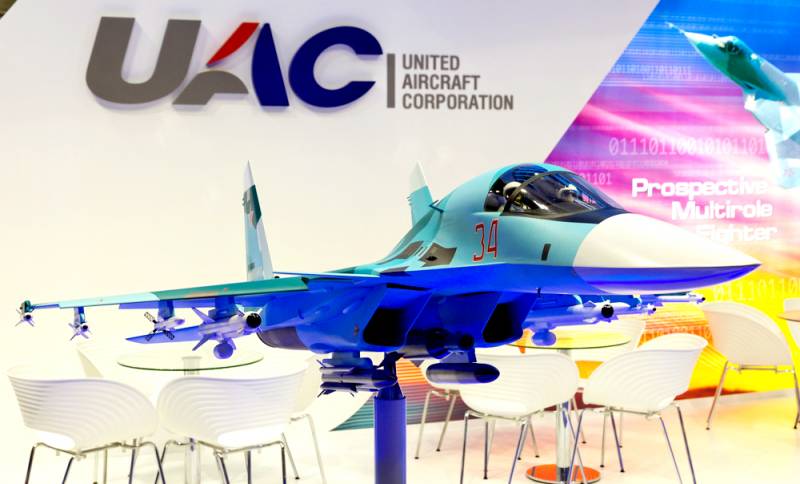 The decision to include UAC in Rostec has been made, now all the necessary documents are being prepared
- Manturov said in an interview with the Interfax news agency.

We made an assessment of the development of the industry in terms of improving management efficiency, achieving a “synergistic” effect from the company's interaction with state-owned enterprises and their key suppliers
- said the minister in support of the decision.

Denis Manturov also noted that “the effects of consolidation, in particular, are based on the similarity of the applied of technologiescomplementarity of design potential and capacities, similarity of sales markets. ”

In the spring of 2017, the head of Rostec Group of Companies Sergey Chemezov declared the desirability, in the future, of including the UAC in the structure of this state corporation. As Chemezov noted then, about 60-70% of components, including aircraft engines, avionics, electronic warfare systems, weapons systems, missiles, are supplied by enterprises belonging to Rostec Group of Companies, while UAC actually organizes assembly production.

Note that the idea of ​​creating vertically integrated structures in the strategic industry, by creating either integrated industry corporations, or by merging or transferring assets to state corporations, has been implemented in Russia for more than ten years.

At the same time, although the activities of such state corporations as Rosatom, or Rostec, are recognized successful in all respects, industry corporations, as a rule, cannot boast of such successes. Mainly because the aforementioned mega-associations like Rosatom or Rostec have absolutely gigantic turnover, incorporate both powerful civilian industries, and defense and scientific clusters, and due to this, as well as the diversified nature of assets, in the right case they are able to form large-scale investment projects within the framework of a state corporation, using their own or attracted funds.

Industry corporations do not possess such resources and capabilities. When creating, for example, the UAC, it was understood that this structure would take on leadership functions in managing and distributing budgets and introducing innovative production and management innovations. It should be noted that it was on this component that the UAC showed a serious drawdown, and if the corresponding introduction of innovations took place (and during the existence of the UAC, a number of initiatives were implemented in this regard), then with the leading organizational and financial role of the subordinate enterprises, and not this management structure . So, the transfer of UAC to Rostec Group of Companies looks completely logical, since this state corporation has the necessary managerial and financial potential.

We also note that relatively also not brilliant successes of the United Shipbuilding Corporation (USC) and Roscosmos State Corporation, there are also fairly regular rumors about their transfer to the Rostec Group of Companies.

If in relation to Roskosmos one can speak of a certain long-term loan of confidence in this organization from the top leadership of the country after the appointment of Dmitry Rogozin as the head of this state corporation with the task of carrying out a deep reform of the space and rocket industry, then with respect to USC it is unlikely to be all the same stable. Since the USK fails to fulfill the state defense order from year to year, and its civilian capacities can only be considered existing on paper, it is possible that a couple of years with such depressing results, they will try to transfer the shipbuilding corporation to Rostekh.

However, since USC is a more problematic group of assets than UAC enterprises, Rostec is unlikely to agree with this idea of ​​integration without a direct request from the country's top leadership.
Ctrl Enter
Noticed oshЫbku Highlight text and press. Ctrl + Enter
We are
Russia may have its own Airbus
"Antonov" is trying to escape at the expense of Russia
Reporterin Yandex News
Read Reporterin Google News
1 comment
Information
Dear reader, to leave comments on the publication, you must sign in.