"The Phantom Threat": Why are American airliners stuffed with cruise missiles dangerous for Russia? 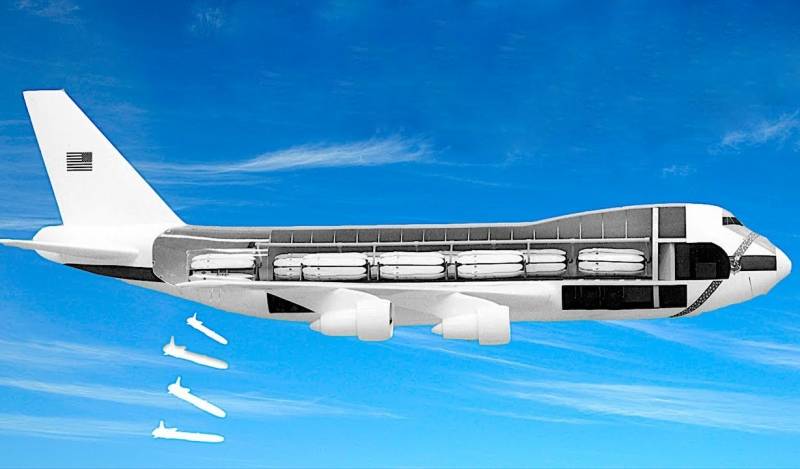 Heavy economic the situation in which the Boeing corporation finds itself forces it to look for new ways to subsidize from the military budget. The American press has recently been actively talking about the possibility of reviving the long-forgotten Pentagon project to create a so-called "cruise missile aircraft carrier" on the basis of civil liners. Will Boeing be able to lobby for its initiative, and if so, what kind of danger can such "civilian missile carriers" pose to our country?


The emergence of effective air defense systems in the USSR during the Cold War showed that altitude is no longer a reliable defense for American bombers, since the use of free-fall ammunition is radically complicated. At the same time, the Vietnam War demonstrated that the potential for the use of "stratospheric fortresses" B-52H against the countries of the Third World is still very large. Therefore, the Pentagon eventually came up with the concept of a massive launch of cruise missiles from a safe distance outside the range of the air defense system. For this, a conventional subsonic aircraft, capable of carrying a heavy load and delivering missiles to the launch point, was quite enough.

The idea of ​​using civilian liners for the needs of the military arose even earlier. On the basis of conventional transport aircraft, air tankers and AWACS aircraft were created. Equipping them with launchers for cruise missiles seemed quite a promising undertaking, since it gave a lot of advantages. The same Boeing airliners have a long-range flight radius, low fuel consumption, are produced in large quantities, while it is possible to disguise an armed aircraft as a standard civilian one and deliver an unexpected strike.

This is how the Boeing-747 CMCA version was created with nine drums located in the tail section. In total, they contained 72 AGM-86 ALCM air-launched cruise missiles, which could be fired from an opened hatch in less than 15 minutes. Such a rate of fire made the direction to intercept the fighter already meaningless. In addition, a large advantage of a civilian liner over military aircraft was its impressive size, which made it possible to place a mass of control equipment inside, which turned it into an air command post. The Boeing 747 CMCA has been technically aligned with the E-4 Nightwatch. It was assumed that hundreds of such "werewolves" would be enough to replace the "stratospheric fortresses." The Pentagon especially liked the idea of ​​a preemptive strike from such "cruise missile carriers" across the Soviet Union from air routes along its borders. Also, civilian airliners converted into missile carriers could be used for air strikes against the infrastructure of Third World countries.

All the leading American aircraft building corporations then joined the competition for the Pentagon budget. McDonnell Douglas offered to arm its DC-42 liner with 10 cruise missiles. Lockheed presented two options at once: the L-1011 CMCA for 50 missiles and the C-5 Galaxy for 110 missiles. Boeing also offered to arm its YC-36 with 14 missiles as a fire support aircraft for troops in non-nuclear conflicts. The project received the approval and support of the Pentagon.

The idea, in fact, is very good, it is a pity that it is directed against our country. Therefore, it is worth rejoicing that at one time it was never implemented. The reason is trivial: even the United States did not have enough money to do everything at once. The Pentagon chose to go through the rearmament of reliable and proven "stratospheric fortresses" B-52 on ALCM missiles, funding the development of a stealth bomber and creating a supersonic low-altitude B-1B to break through the air defense system.

Today, the likelihood of a return to this old project is very high.

At firstBoeing, this "national treasure" of the United States, is in dire need of financial support. Despite the fact that it is in "effective private hands", the corporation found itself in a severe crisis and without government subsidies in the form of a program for the conversion of civilian airliners into military aircraft, it may not survive it.

Secondly, a new type of free-fall ammunition called CLEAVER (Cargo Launch Expendable Air Vehicles with Extended Range) has been developed and successfully tested in the USA. It is designed to be dropped from conventional military transport aircraft, which actually turn into bombers. Of course, you can't use them against a technically advanced enemy like Russia or China, but against some Afghanistan or Libya, it's easy. A hundred CMCA can unleash enormous striking power on the heads of the "barmaley" at once, even without the need to engage and expend the resources of a real bomber aircraft.

Thirdly, still poses a potential threat to the possibility of disguising an aircraft stuffed with cruise missiles under an ordinary civilian airliner. Such "werewolves" can secretly concentrate in the airports of countries allied to the Americans, for example, in Ukraine or in the Baltic States, and, taking off from there, strike a preemptive strike on the infrastructure facilities of the RF Ministry of Defense.

The need to constantly track and identify such shape-shifters will turn into a constant headache for Russian or Chinese intelligence.
Reporterin Yandex News
Reporterin Yandex Zen
24 comments
Information
Dear reader, to leave comments on the publication, you must sign in.