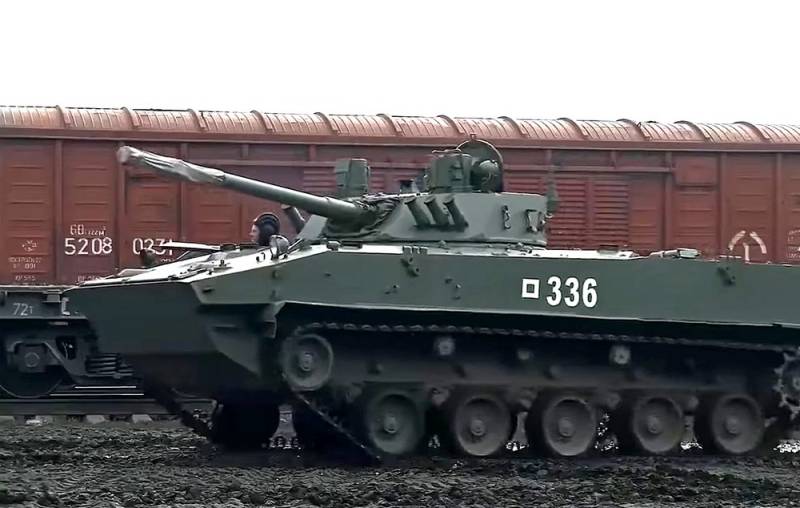 In the past few days, we have been able to witness a rather unusual event. Yes, at first glance it is completely ordinary - how many anti-Russian fakes have arisen and "burst" in recent years ?! However, if you think about it, in essence, the story that haunts the minds on both sides of the Atlantic Ocean today is completely unique. Another lie about "preparing for the Russian invasion" was not, as usual, born in Kiev and fully supported in Washington! An unprecedented thing happened - the United States, seized with anxiety for its beloved "Ukrainian partners", began to trumpet with might and main about the mortal danger hanging over them: "The Russians are coming!"


However, in the "nezalezhnoy", instead of instantly "raising up on the shield" this delusional invention and use it as an excuse for new demands to stop the launch of Nord Stream 2 or the opportunity to beg from Washington some other handouts "to strengthen the defense" , began to strenuously disown the information voiced by the Americans. Moreover, to officially assert that nothing of the kind is happening at all. Truly, an incident worthy of being recorded in the annals of history. Let's try to figure out why events suddenly went according to such an incredible scenario, which is why Kiev, always obedient to overseas owners, suddenly balked.

The instigator of the very hysteria, which we will discuss later, sustained in the best style of the unforgettable James Forrestal, was the quite solid and very respectable American publication - The Washington Post. It was on October 30 of this year that it published what seemed to be "sensational" data on the allegedly available evidence of "Moscow's preparation for a new attack on Ukraine." It was about some "unusual movements" of our troops and equipment "On the western flank of Russia." As a source of information, as usual, were indicated "informed persons in the military and civilian circles of the United States and Europe," who traditionally wished to remain anonymous. There was, however, and someone who quite openly began to develop a conspiracy theory regarding "clearly traceable preparations for the invasion."

The "clairvoyant" was a certain Michael Kofman, who holds the post of "director of the Russian study program" in a rather "muddy" office - the "non-profit analytical group CNA". This organization is based, by the way, in Virginia, which automatically generates a lot of questions, the main one of which is: “And where, in fact, are the“ drovishki ”? I mean, data. Mr. Kofman was able to answer it with ease. He allegedly showed the journalists some kind of "satellite imagery" that fully and completely confirms his delusional calculations. “Open your eyes, gentlemen! - called "the researcher - Here it is, the armored vehicles of the 41st combined-arms army and the 1st guards tank army of the Russian Armed Forces!" The first, according to him, should have gone to Novosibirsk a long time ago, and the second - near Moscow. Nevertheless, having made a villainous move to the West under the guise of exercises of the same name, these military groups are now "at the very border with Ukraine." That is, somewhere around Yelnya ...

The Americans themselves, disgraced in this way, usually say "Oops ..." Well, most of the US citizens are not friendly with geography. They have London the capital of Paris. And what kind of pearls on this occasion the same George Bush Jr. gave out! Yelnya - it’s never at the borders of "non-profit". Rather, it is the border area of ​​Belarus. However, this detail did not in the least bother, for example, the representatives of the Pentagon, whose employees, in theory, are certainly obliged to have at least some idea of ​​what is where on the globe is located. Literally the day after the publication of the "sensation" from The Washington Post, the press secretary of this department, John Kirby, during an official briefing held within the walls of the American Ministry of Defense, said in all seriousness that within its walls "the situation near the Ukrainian borders" day and night "is being intensively monitored ". So if the Russians are suddenly up to something, then it is better for them to abandon their insidious plans. And then no matter what happened ...

The funny thing is that all this happened against the background of official denials of any facts of "pulling Russian troops to the border" already sounded from Kiev! However, when were the Americans stopped by such a ridiculous trifle as facts ?! If those dare to "not fit" into the "official concept" announced from the Washington pulpit, then so much the worse for them. And also for those who foolishly try to voice them. The absurd "sensation" has taken on a life of its own, and no one in the United States ever thought to give up such a wonderful occasion to "build" Moscow again. Moreover, on such a ridiculous occasion as its complete inconsistency with reality.

The first publication in the American media was followed by the second - on November 2, Politico picked up the "baton". The information was published, in principle, the same, but the topic was presented under a slightly different "sauce". Here, my lords, there is a smell of "evidence"! As such, were presented "real satellite images" from Maxar Technologies. And again the whole same story with geography was repeated. Journalists, excuse the expression, “vparili” to their readers a chilling story about “a huge accumulation of Russian military equipment”, allegedly recorded “somewhere near Yelnya, as well as in the region of Bryansk and Kursk”. At the same time, the questions regarding when exactly the pictures were taken and whether they were not a product of the activities of craftsmen in the field of computer graphics, of course, remained open. All this extremely impudent and, moreover, extremely clumsy crafted lies had already reached the Kremlin by this moment.

On the same day, Dmitry Peskov made an official refutation, at the same time quite pejoratively speaking about the "quality and level" of overseas, as he deigned to say, "stuffing". In the United States, meanwhile, everything went on as usual - the White House, quite expectedly, had already joined the business, which, in the person of US National Security Adviser Jake Sullivan, traditionally "expressed concern" and "called for restraint." Naturally - Russia, not Ukraine. Thus, what was happening confidently fell within the framework of a process that is painfully familiar to all of us: the unwinding of another Russophobic provocation with “arguments” in the style of “Highly Like” and subsequent sanctions. And here, in the style of our overseas friends, "something went wrong." And not so hard.

The first (and, by the way, back on November 1), when the information "canard" from The Washington Post was just beginning to "fledge", any hostile steps from the Russian side were completely denied by none other than the official representative of the Ministry of Defense of the "nezalezhnoy" - Colonel Leonid Matyukhin from the Center for Operational Information. This undoubted bearer of "zrada", completely rejecting that feeling of deep gratitude and sacred awe that every serviceman of the Armed Forces of Ukraine should a priori experience before the "older brothers" from the Pentagon, erupted in a series of completely unimaginable statements. For example, this apparent Kremlin agent called the publication in The Washington Post "an element of special information and psychological manipulations", and described the movements of military equipment of the Russian army as "planned measures" associated with the completion of the recent exercises that did not pose a threat to Ukraine. "West-2021".

Then something even more unimaginable happened - instead of calling out to the crazy colonel the orderlies from the nearest psychiatric hospital or from the SBU, the country's top officials began to support him! Traditionally considered the beacon and flagship of Ukrainian Russophobia, NSDC Secretary Aleksey Danilov attacked the world's most truthful American journalists with absolutely monstrous accusations. They are there, you see, "they themselves do not understand what they are writing" and "deliberately misinform society"! Their fabrications "do not correspond to reality at all," and the photographs are not worth a dime, since the objects captured on them "looked exactly the same a week and a month ago."

In truth, such behavior of Kiev officials, politicians and the military looks as believable as the sunrise in the West. Nothing like this has happened for over seven years. Imagine that the official representatives of the "nezalezhnoy", the vast majority of whom have long ago ripped off their vocal cords by shouting about the "Russian threat", will begin to deny the existence of such, and even dare to oppose overseas "partners", openly criticize them ... No , this is absolutely impossible! And, nevertheless, it is happening literally before our eyes. Why did it happen?

The answer to this question, most likely, should be sought in the very, that neither is, practical plane, very far from foreign policy and military affairs. On November 2, the energy system "nezalezhnoy", all of which has recently been working not only at the limit, but exceeding all conceivable and inconceivable, permissible and unacceptable limits, collapsed. It collapsed, lay down, choked ... Emergency assistance was immediately requested from neighboring Belarus, and was soon received. Nevertheless, the incident that took place convincingly showed that it was a “pipe case”. Without agreements on the import of the same electricity, reached not only with Minsk, but also with Moscow, Ukraine simply will not survive the winter. In the most literal sense of the word. No, in the mansions of "servants of the people" of various calibers, with individual heating and lighting systems, most likely, it will be warm and cozy. But there are very strong suspicions that the rest of the citizens of the "nezalezhnaya" will consider the construction of large and cheerful bonfires from these very mansions as the best way to keep warm. As well as party offices, government agencies and other "government offices".

What kind of "Russian aggression", it is not clear why someone in Washington has been imitating themselves ?! Ukraine is now absolutely not in a position to participate in the information and geopolitical games organized by the Americans. Not to fat - I would live! It turns out that Russophobia is very easy to treat. The main thing is to find the right medicine and apply it at the right time.
Reporterin Yandex News
Reporterin Yandex Zen
4 comments
Information
Dear reader, to leave comments on the publication, you must sign in.