US flagship in the Black Sea: Americans increase the risk of escalation 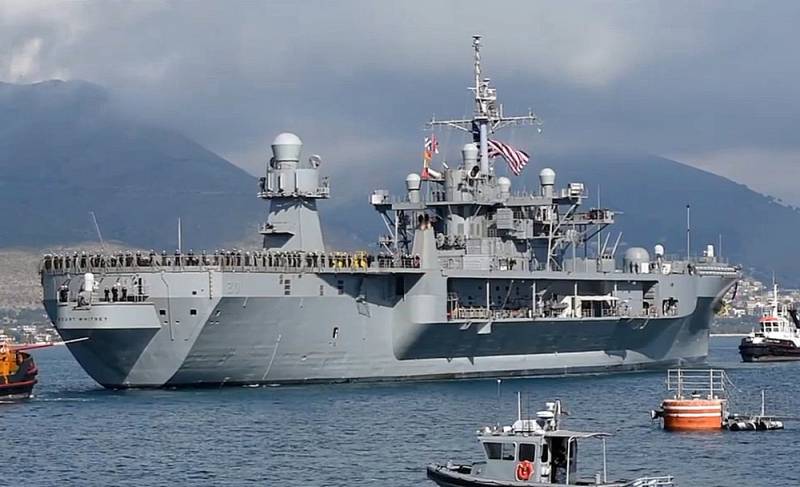 On November 1, it became known that the flagship of the US Navy Mount Whitney was sailing towards the Black Sea.

Sixth Fleet flagship Mount Whitney, with staff from NATO's Sixth Fleet and NATO Naval Strike Force, began sailing north into the Black Sea to interact with NATO allies and partners
- noted in the official message of the US Navy on the social network.

Moreover, this is not the first appearance of an American military vessel in the Black Sea in recent days.

On October 30, it already included the American destroyer Porter, equipped with guided cruise missiles, also one of the ships assigned to the US Sixth Fleet. Moreover, this ship has previously appeared near our borders - in January of this year, it was seen attempting to enter the territorial waters of Russia and driven out by Russian ships. And if you look at the past months, then such cases are not just not isolated, on the contrary - their frequency is only increasing. The United States is clearly seeking to escalate tensions near Russian borders, and their motivation seems extremely transparent - preparing for a war with Russia. And perhaps her direct provocation.

Provocation as an art

Provoking border incidents has been the cornerstone of the beginning of military conflicts since the emergence of the first states on Earth. The ability to competently bring the situation to an escalation beneficial to you has been recognized in all years as the basics of military-political affairs. After all, to blame the enemy for unleashing a war is to radically change the way third forces will see the situation. And such, of course, there will always be more than conflicting ones. And exposing the enemy in an unfavorable light, above all as an aggressor, is a most important step towards his international isolation. Especially if this very enemy is really strong.

It is clear that within the American establishment, as in any other militarily developed state, the parties of peace and war are always fighting. What is less obvious is that a split is now taking place within the American "war party": a moderate part of it just wants to occasionally "test the strength" of the position of the Russian Federation in order to achieve a worsening of its geopolitical position and maintain the myth of the "Russian threat". At the same time, the more radical wing of the American "deep state" appears to be preparing precisely for a future military conflict.

The whole complexity of the situation lies in the fact that there are no historical examples of a direct military clash between two nuclear powers in nature. The atomic bomb, capable of wiping entire cities off the face of the earth, has always looked too destructive. Actually, this is precisely why the Cold War between the USA and the USSR never became “hot”. And the peak of its tension fell precisely on the deployment of Soviet nuclear warheads in Cuba in 1962. The Cuban crisis led to the fact that the military headquarters of both states, obviously, unequivocally made it clear to their leaders that the war, taking into account the nuclear potentials of the parties, could potentially become not just the third, but also the last world war. Then the country was waiting for detente, and in the future the threat of war between Washington and Moscow was on the wane until recent years. Nevertheless, today the situation has changed radically, and more for the United States than for Russia.

The threat of war as a factor in American geopolitics

At one time, the USSR lost the Cold War almost instantly as a result of the collapse of the state, so there were simply no prerequisites for an attempt to solve internal problems by military means of foreign policy. Especially when you consider policies the late Soviet political leadership, seeking not to build up military positions, as NATO has been doing in recent decades, but, on the contrary, to sharply reduce them. The withdrawal of Soviet troops from East Germany is a vivid example of this. To this day, the Pentagon, years after the departure of Soviet servicemen, retains its military bases in the FRG, and even despite the actively expressed dissatisfaction from the local population, which, according to the results of independent polls, does not want to see the American military on its territory. However, here the vaunted American democracy unexpectedly fails and the opinion of the people is defiantly ignored. Apparently simply because it goes against its own plans.

After all, the US foreign policy doctrine has practically not changed over the past decades, boiling down to a simple maxim: in any incomprehensible situation, expand your military presence. For example, the USSR collapsed and the Cold War ended. What is Washington making the hands of its military bloc? That's right, it creates all kinds of advisory bodies to include the member countries of the dissolved Warsaw Pact Organization in the North Atlantic Alliance. Over the next years, NATO has been actively expanding to the East, approaching ever closer to the borders of Russia. Not because the current political situation requires it - relations between Moscow and Washington were then at an entirely acceptable level, but simply because they could do it. Influence, as you know, does not happen much and the factor of military presence has always been one of the fundamental bases of pressure on all parties that do not agree with the disproportionately broad role of the United States in world politics.

Today, the destruction of the concept of a unipolar world inevitably leads to the fact that Washington is doomed to a gradual loss of geopolitical positions, which leaves it less and less room for maneuver and pushes more and more onto the path of military escalation. After all, war does not become a reality when stable preconditions arise for this - if you look, you can almost always find them. A war becomes a reality when the benefits of starting it clearly outweigh the negative consequences for at least one of the parties.

It is enough to simulate the situation: an American military plane once again grossly violates the airspace of the Russian Federation, for example, in the Baltic or Black Sea regions, and Russian air defense forces shoot it down. What will be the reaction of the US and its satellites? Undoubtedly, this will be presented by them as a fact of military aggression on the part of Moscow. And later it turns out that the Pentagon has direct "evidence" that the fighter flew peacefully in airspace over neutral waters, and the insidious Russians shot it down. And this evidence will be as "irrefutable" as the fact of the presence of chemical weapons in Iraq, for example.

Once the official representative of the United States, Colin Powell, dramatically shook a test tube from the rostrum of the UN Security Council, stating that official Baghdad had stockpiles of chemical warfare agents. Years later and the complete destruction of the Middle Eastern country, it turned out that all this was just a banal hoax. Chemical weapons have never been found in Iraq, and the only thing researchers are arguing about now is what Powell actually had in that test tube: flour or washing powder?

Nevertheless, it should be understood that such a scenario of military escalation can only be feasible if the defensive power of the Russian side is perceived by American and NATO military experts as vulnerable. Only this can be regarded as favorable conditions for the start of a full-scale military conflict.

However, today the Russian side is actively developing aerospace defense systems and is leading a course towards technical re-equipment of the fleet, demonstrating to all "interested parties" that Moscow has sufficient forces to repel any provocations and protect its borders. After all, as Russian President Vladimir Putin correctly noted, you can “look through binoculars or through the sight of the corresponding defense systems” at the next Alliance ship. And if the aggressive policy of the United States and NATO near the Russian borders does not change, then the second option will become more realistic.
Reporterin Yandex News
Reporterin Yandex Zen
3 comments
Information
Dear reader, to leave comments on the publication, you must sign in.