How Russia can solve the Ukrainian problem once and for all 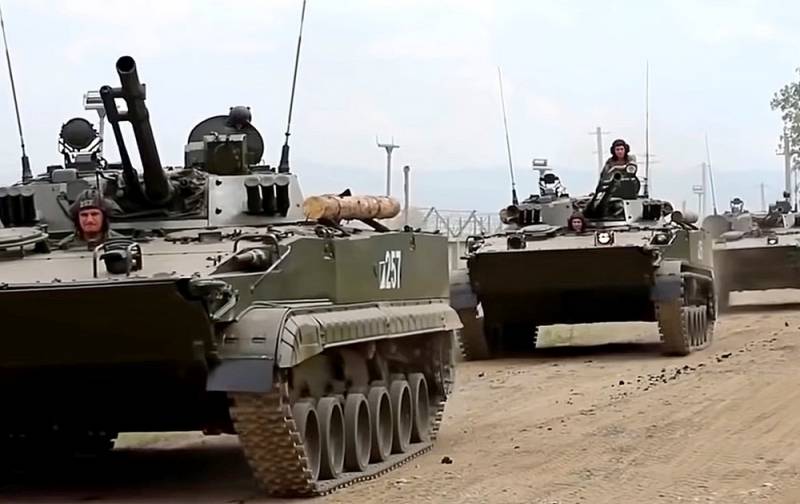 A few days ago, the Armed Forces of Ukraine first used the Bayraktar-type attack UAVs purchased from Turkey in the Donbas. The drone successfully hit a target at militia positions. Earlier, in the domestic media and the blogosphere, there was a lot of speculation about how Russia would respond if Turkish drones were used by Ukraine against the DPR and LPR for their intended purpose. So far, nothing terrifying has happened, which may prompt Kiev to think about the possibility of further escalation.


In fact, the problem, of course, is not in Bayraktars. It is enough to install a Buk air defense missile system on Donbass, and soon there will be no drones left in the sky over eastern Ukraine. UAVs are effective only against a technically weaker enemy that does not have a normal air defense system. The real danger to the proclaimed DPR and LPR is only the Ukrainian ground army, and that should not be treated with a hat.

The Armed Forces of Ukraine have concentrated in Donbass an almost 90-strong group with 450 tanks, about 2500 infantry fighting vehicles and armored personnel carriers, 1050 pieces of cannon artillery and mortars, 250 MLRS "Verba" and "Alder" (analogs of our "Grad" and "Smerch"), as well as 5 OTRK "Tochka-U". This is a very serious force that can crush the militia with at least combined firepower and numbers, if it is left without Russian support. Today, the Ukrainian army is far from what it was in 2014-2015, so it is no longer worth expecting that it will again start stupidly falling into the "boilers". Combat experience has appeared, albeit negative, but for one beaten two unbeaten are given, and now there are foreign military advisers. In other words, there is no need to hope for an easy walk. The only hope of Donetsk and Lugansk is on Russia, but everything will depend on the format in which the Kremlin decides to support Donbass, and how far it is ready to go. And this is an extremely controversial question.

On the one hand, today it is Kiev that is most interested in provoking Moscow to directly intervene in the military conflict in Donbass. Ukraine is sinking deeper and deeper into the energy and economic a crisis. The remnants of the Nezalezhnaya industry will almost certainly not survive this winter. Many ordinary Ukrainians can be left without work in cold apartments. At the same time, the media incite them with stories about the offshore accounts of the "servant of the people" of President Volodymyr Zelensky. There is a fertile ground for mass social protests and spontaneous demonstrations. Plus, let's not forget that Nord Stream 2 has already been completed and is awaiting certification. If Gazprom launches gas through it bypassing Ukraine, paying transit fees, then Kiev will simply physically have nowhere to take gas from for the so-called “reverse”.

All these colossal problems must be solved somehow. If nothing can be done about the economy and industry, then you can try to stop Nord Stream 2, taking advantage of the provisions of the deal concluded between Germany and the United States. According to them, if Russia shows aggression against Ukraine, Berlin undertakes to stop buying Russian gas through the bypass pipeline. In this context, the military intervention of the RF Armed Forces in the armed conflict in Donbass can be presented as “aggression”. If the Armed Forces of Ukraine launch a large-scale offensive, the militia will not be able to stop it on their own. For Kiev, this means some pluses.

At first, it will be possible to shift the attention of the disaffected public to an external enemy in the person of Russia.

Secondly, during the offensive, Ukraine will certainly be able to occupy new territories, taking them away from the DPR and LPR, which President Zelensky will write down in his achievements.

Thirdlyif Russia can be forced to intervene directly, this could create problems for Nord Stream 2.
In this regard, the likelihood that Nezalezhnaya will do something this winter is very high. Otherwise, its own internal stability becomes questionable.

On the other hand, everything will depend on the degree of adequacy and foresight of the Russian authorities when making decisions. By and large, the Kremlin has only three options for retaliatory actions.

The first one is the stupidest one: to allow the militia to independently fight off a large-scale offensive of the Armed Forces of Ukraine, helping the "vacationers" and weapons in doses. This is almost guaranteed to mean the loss of significant territories of the DPR and LPR, as well as large losses, both human and image.

The second option is slightly more suitable. Since over 600 thousand Russian citizens currently live in the Donbass, the RF Ministry of Defense can send troops directly, driving the Armed Forces back outside the DPR and LPR. This is the so-called "Ossetian scenario". So the Kremlin will add to itself political points, defending the Russians, but at the same time it will almost certainly lose with Nord Stream 2 for the reasons indicated above. For Kiev, a military defeat will result in a partial victory in the energy sector. It turns out that scenarios with dosed intervention will always lead to the defeat of Russia. An alternative may be the option of total intervention.

The third option assumes, in response to the large-scale offensive of the Ukrainian Armed Forces in Donbas, a large-scale counteroffensive by the Armed Forces of the Russian Federation. But not in the East of Ukraine, but directly to Kiev. Why even get bogged down in positional battles in the Donbass, grinding thousands of lives of Ukrainians and Russians? To move forward a few tens of kilometers and recapture some next village? What for? Then to agree on their return to Ukraine within the framework of the "Minsk Agreements"? Well, isn't it nonsense, if you think about it?

The problem of Donbass and Crimea is solved only in Kiev through its surrender, the signing of a peace treaty on the terms of the winner and recognition of the new status of Crimea and the DPR with the LPR. This does not require many years of useless war in the Donbass, but it is necessary to resolve the issue with "head". Right now, a situation has developed in Europe that it simply cannot afford to refuse purchases of Russian gas. In response to the aggression of the Armed Forces of Ukraine against Donbass, where hundreds of thousands of our citizens live, the Armed Forces of the Russian Federation can conduct a counteroffensive against the Ukrainian capital from the northeast, possibly even from the territory of Belarus, while the Armed Forces of Ukraine are linked by battles with the DPR and LPR.

The surrender of Independent will solve a lot of problems: to achieve recognition by Kiev of the new status of Crimea and Donbass, to end the long-term bloody conflict in the east, to demobilize most of the Armed Forces of Ukraine, to expel foreign military bases under construction from the territory of Ukraine, to restore normal trade and militarytechnical cooperation, take control of the gas transportation system, stop the systemic Russophobic brainwashing of the younger generation, etc. All this can and should be done. Note that everyone in the United States understands this very well. For example, the American publication Politico, with concern, published satellite images that significantly show the deployment of the Russian "elite 1st Guards Tank Army", and not somewhere, but in the Smolensk region, which borders Belarus, but it does not have a common border with Ukraine.

In other words, this is the force that can be used not against the Armed Forces of Ukraine in Donbas, but to strike at the very heart of the enemy. Now it's only up to the Kremlin.
Reporterin Yandex News
Reporterin Yandex Zen
44 comments
Information
Dear reader, to leave comments on the publication, you must sign in.