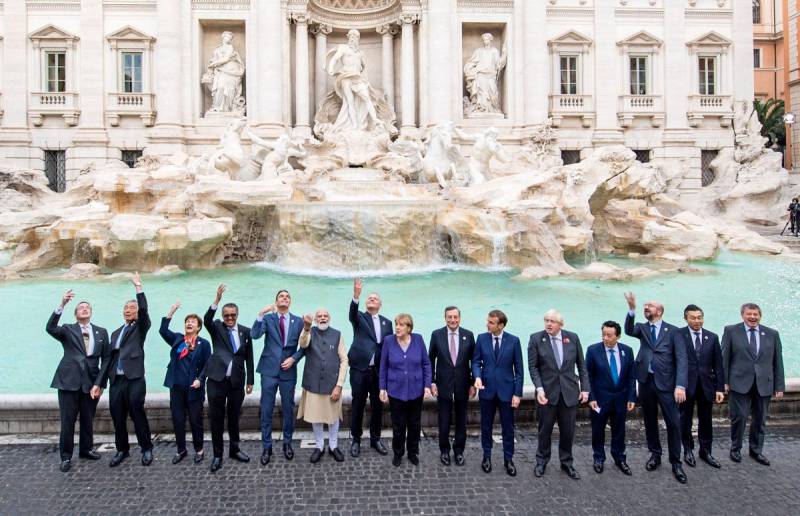 On October 31, UN Secretary General António Guterres announced that the summit of the heads of the G20 countries, held in Rome on October 30-31, did not live up to expectations on the issue of combating climate change.

While I welcome the G20's renewed commitment to finding global solutions, I am leaving Rome with dashed hopes. But at least they did not die completely
- said Guterres in a message posted on the social network.

Such a demonstratively expressed disappointment of the UN Secretary General is intended to show the world that Western policywho voluntarily assumed responsibility for the fight against climate change, in fact, completely failed the opportunity that opened before them to make any real decisions. Although it is precisely the fight against global warming that is a key issue on the agenda of countries that are not only in the G20, but also in the G7.

To begin with, it is worth touching on why the appeal of the UN Secretary General, a formally neutral figure, is de facto addressed specifically to the countries of the collective West, although the G20 includes twenty states. In recent years, it is Western politicians who have been the most active in speaking from the high rostrum, calling for a comprehensive fight against climate change. Now it is already difficult to figure out what happened before: a request from a large stratum of society, which cannot be ignored, or the desire of politicians to add a new controllable factor to the field of domestic politics. Only one thing is clear: today, the governments of Western countries have readily picked up the banner of the fight for the environment, flashing the bright flag of a "green future" in front of their voters. However, what at first seemed a sincere desire to take care of the flora and fauna of our planet and leave a better world to the descendants, in fact turned out to be just another variation on the theme "if you can't win, take the lead." Western politicians have turned the fight against climate change into a loud political statement, a slogan designed to take a fundamental place in the minds of their citizens along with ideas of tolerance. And it cannot be said that they do not succeed - the phenomenon of the eco-activist Greta Thunberg, who is gradually becoming a symbol of the generation in the West, is a vivid example of this.

After all, if you do not occupy the heads of voters with such things, then somewhat different questions will inevitably begin to arise. Why has the standard of living of young people in the developed countries of the so-called “golden billion” degraded so sharply over the past two decades? Why parents of modern young people at one time could afford much more financially than their children now? How did it happen that the state in rich capitalist countries (the USA, for example) cannot find money for a universal free health care system, but at the same time regularly wages colossally expensive wars around the world? Of course, Western politicians do not want to answer all these questions.

It is much easier to bring all attention to another point: it is high time to save the world not only from "aggressive" Russia and China. No, humanity is under a threat of a planetary scale - global warming. And it is precisely on the fight against it that all the forces that will remain after the endless military spending on the senseless policy of containing Moscow and Beijing must be thrown. For several years, promises poured from a cornucopia in the complete absence of real progress, and even the most loyal to their governments eco-activists, obviously, began to guess that the conditional Bruce Willis, saving the world, would not be able to solve this problem. We need concrete and clear political decisions, which simply do not exist.

The result was Rise of the Endangered and other similar movements. The environmental protest, fed by the state propaganda of Western countries, inevitably began to be radicalized. The protesters began blocking roads, chaining themselves to the asphalt and doing other things that were incompatible with a peaceful protest. Part of the developed civil society, so often praised by the apologists of the idea of ​​the collective West, suddenly turned out to be very, very aggressive. And they expected action from the next meeting of the GXNUMX. And we got it - we know what.

Hypocrisy as a basic democratic value

The results of the summit of the heads of the GXNUMX were criticized not only by the UN Secretary General, but also by the leading Western organization for the protection of the environment - Greenpeace.

If the G20 was a dress rehearsal for (the Glasgow climate conference), then world leaders have forgotten words. Their communique turned out to be weak, devoid of ambition and vision, and simply inappropriate for the moment.
Jennifer Morgan, CEO of Greenpeace International, told Bloomberg.

According to Bloomberg and Reuters, the declaration adopted at the end of the G20 summit on many points actually copies the Paris climate agreement six years ago. In addition, the decision of the countries to end state financing of coal energy abroad, without setting any specific goals for the abandonment of coal within the countries themselves, cannot be called anything but half-hearted. Especially for the UK and the US, striving to be in the wake of global environmental policy.

This behavior of the leaders of the countries of the collective West first of all demonstrates their adherence to the key basic value of what they really mean by the term "democracy" - namely, hypocrisy. The lack of real solutions, the desire to “sell” one agenda to their voters, and implement a completely different one, shows that in reality Western politicians are not too eager to achieve the adoption of significant changes right now. No, the fact that the transition to green the economy it is necessary that none of them deny, but as far as real cases are concerned, for some reason they are suddenly seized by universal political impotence. The decisions made, as a rule, describe in maximum detail the wonderful, ecologically clean West of the future - in about thirty years, but only with extremely scanty strokes touch on the boring issues of the dull present. Namely, who and how will implement the steps, many of which will turn out to be extremely unpopular among the less ecologically ideologized part of society? Indeed, nothing can be done with the fact that they will significantly increase the costs of housing and communal services and raise prices for consumer goods. And who wants to pay for the realization of other people's ambitions from their own pockets?

At the same time, Brussels is also adding fuel to the fire, which has made a serious political stake on environmental populism. The European Union is not a single state, no matter how much the Brussels nomenclature would like, and on the geopolitical arena this supranational entity is represented extremely sparingly. Neither the G7 nor the G20 have room for EU structures. And the last one is extremely disliked by the European bureaucrats. Hence the attempts to get France's seat on the UN Security Council, for example. Brussels desperately craves legitimation and seeks it in any form of public policy, announcing, for example, energy transitions that provoke large-scale energy crises.

All this leads to the fact that it is high time to seize the climate agenda from the weakening hands of the collective West. Russia, which possesses one of the largest reserves of natural resources on Earth, may well pull off some of it upon itself, becoming the banner of a reasonable, non-populist approach to environmental protection. Indeed, despite the apparent solidity of the collective West, each of its constituent parts is constantly striving to "pull the blanket over itself." And Russia needs to use this aspect to strengthen its own geopolitical positions. Disappointment with Western policies is opening the way for Eastern ones again. The thirty years that have passed since the collapse of the USSR are sufficient not only for Russia to again work out its own path of development, but also to begin its expansion to other countries. Healthy conservatism, long rejected even by formally conservative Western political forces, may well become a new Russian national idea, broadcast to the whole world. If part of the Western world is going crazy, that doesn't mean you need to join. It would be much more correct not to stand aside, but to offer him a intelligible and much more effective alternative.
Reporterin Yandex News
Reporterin Yandex Zen
4 comments
Information
Dear reader, to leave comments on the publication, you must sign in.