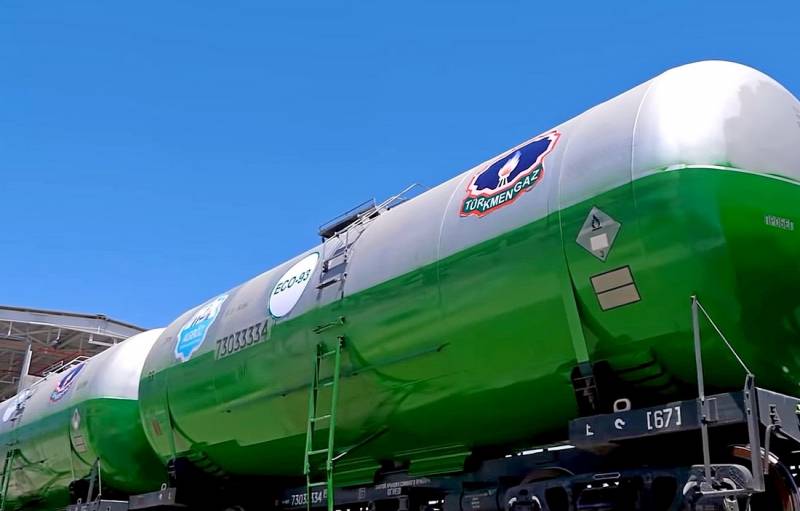 Winter is just around the corner, and the energy crisis in Europe is only getting worse. At the same time, Gazprom has clearly been designated as the main “culprit,” and the Western press is beginning to hear calls to send it to hell. But what, then, will replace Russian gas?


The general triumph of renewable sources is still very far away, nuclear power is frightening for many, coal is environmentally harmful. It is also impossible to rely on LNG, because in the conditions of a liberal market, suppliers forget about Europe and send their tankers to Asia, where the profit is higher. There remains only gas, moreover, pipeline gas, preferably with long-term contracts for guaranteed supplies. But where to get it, if not in Russia? And here again they start talking a lot about Azerbaijani gas.

The idea of ​​reducing Europe's dependence on supplies from Russia has been around for a long time. Within its framework, the so-called "Southern Gas Transportation Corridor" was built, connecting the fields of Azerbaijan with the Turkish Trans-Anatolian Gas Pipeline (TANAP) and the Trans-Adriatic Gas Pipeline (TAP), leading to southern Europe. The only problem is that within the framework of the existing pipeline network, Baku can supply only 10 billion cubic meters of gas a year to the countries of the European Union. However, President Aliyev recently boasted that Azerbaijan's proven gas reserves reached 2,6 trillion cubic meters and threatened to expand supplies:

Azerbaijan began gas supplies to Europe at the end of 2020. We see that we can become gas suppliers to other EU countries. We plan to work with the EU to expand the geography of supplies.
In the context of the current energy crisis, Brussels' interest in Baku's initiatives will obviously increase sharply. However, Europe will no longer be full of Azerbaijani gas alone. Apparently, in the very near future, we should expect activation in the direction of connecting to the "Southern Gas Transportation Corridor" of Turkmenistan.

Europe has been eyeing Turkmen gas fields for a long time. This Central Asian republic is extremely rich in "blue fuel" reserves, which amount to about 19,5 trillion cubic meters. However, due to the peculiarities of its geographical location, Ashgabat can export it only to two neighboring countries - China and Russia. This makes it possible for the main gas buyers to set prices that are comfortable for themselves, and the PRC has especially succeeded in this. Turkmenistan is forced to sell "blue fuel" to the Celestial Empire at low prices in payment of a 4 billion loan issued by China for the construction of a pipeline for its own needs. That's how you need to be able to do things.

As an alternative to Russia and China, Turkmenistan considered the energy market of distant Europe. It was planned to build an offshore pipeline along the bottom of the Caspian Sea, which was supposed to connect with the Southern Gas Corridor. At the expense of Turkmenistan, the European Union could already receive 30 billion cubic meters of gas per year, which already represents a very significant volume. Unfortunately for Ashgabat, the problem of the unsettled legal status of the Caspian Sea stood in the way of the construction of the Transcapian pipeline, and all these plans remained just projects. It was also not clear who would pay for the construction of the gas pipeline.

Fortunately for Ashgabat and its European partners, in 2018 the "Convention on the Legal Status of the Caspian Sea" was signed. All five Caspian countries, including Russia, have established new rules for laying subsea pipelines. Now, for this, the consent of only the nearest neighbors is sufficient, and not of all five states. In other words, Moscow's permission to sign an agreement between Baku and Ashgabat is no longer required. True, a reservation was made that other parties to the Convention may require the implementation of all environmental standards, delaying the process. Practice shows that in the case of Nord Stream 2, Denmark was able to drag out the red tape for several years, but in the end it was still forced to issue a permit. Why the Russian leadership gave the green light to an energy project competing with Gazprom, the author of the lines has not yet been able to figure out for himself. But in Baku and Ashgabat they immediately perked up. In early 2021, Azerbaijan and Turkmenistan signed a memorandum of understanding on joint exploration and development of hydrocarbon resources at the Dostlug (Druzhba) field in the Caspian Sea. A very symbolic event and the name of the project. Against whom the former Soviet republics will be friends, probably, and so it is clear without unnecessary explanations.

So what do we have. A large-scale energy crisis is growing in the Old World. The guilty party is Gazprom. At present, there is a plan to replace Russian gas with any other, for example, Azerbaijani, or better yet, Turkmen. Taking into account the heightened interest of Europe and the extreme politicization of the issue, it can be assumed with a high degree of probability that Brussels itself will find the necessary investments for the construction of the Trans-Caspian pipeline. At the same time, Moscow for some reason itself tied its hands by signing the Convention on the Caspian Sea. What's next?

Now it remains to rely only on the position of China. Beijing is extremely interested in maintaining its exclusive status, and it does not need Turkmen gas to start going to the alternative European market. Why would he? The PRC clearly considers all these "blue fuel" reserves as their own, and the Chinese benefit from the preservation of Ashgabat's semi-cabal status. This means that after Russia's voluntary withdrawal from the game, the Celestial Empire will enter the battle for Turkmen gas with Europe, which will be forced to use other methods of pressure.
Reporterin Yandex News
Reporterin Yandex Zen
6 comments
Information
Dear reader, to leave comments on the publication, you must sign in.