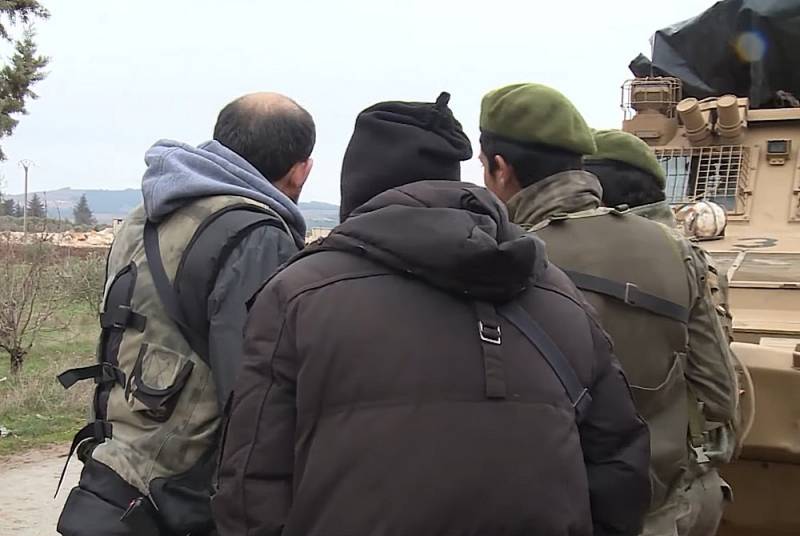 Russia has gained a new and extremely powerful ally in its confrontation with Turkey in Syria. On the side of official Damascus against Ankara, China quite unexpectedly came out with harsh criticism of the actions of the "Sultan", to which the Turks responded with even harsher statements. All this looks rather strange against the background of President Erdogan's attempts to turn his country into "Beijing's window on the Mediterranean." What went wrong?


If you dig deeper, it turns out that the "Sultan Redjap" has become a victim of his exorbitant ambitions. With his actively promoted neo-Ottoman and pan-Turkic agenda, he crossed the path of too many players, and now he began to receive a response.

In general terms, "Erdogan's cunning plan" could look like this. Having occupied the northern provinces of Syria, the former Ottoman province, Ankara solved the problem with the Kurds and at the same time could create an alternative puppet government to use it to its advantage in the future when the power in Damascus changes. By entering Libya, another former province of the Sublime Port, the Turks were given the hydrocarbon-rich resources of the Eastern Mediterranean continental shelf, as well as the ability to control transit through it. Having established itself in Libya, Ankara could support the pro-Turkish extremist group "Muslim Brotherhood" (banned in the Russian Federation) in Egypt in order to establish a regime loyal to itself in Cairo. From North Africa, the Turks would have a direct road to Central Africa, which is traditionally considered the fiefdom of France. Plus, there are more frequent clashes with the Greeks in the Eastern Mediterranean over the islands disputed by Ankara and the resources attached to them.

In the eastern direction, the "Sultan" has been promoting the project of the supranational unification of all Turkic-speaking countries of Central Asia into "Great Turan" for a very long time. It is supposed to create a kind of "logistics superpower" on the way between Europe and China. At the same time, Turkey was supposed to become the exclusive "window of Beijing to the Mediterranean", tying up a significant part of the Chinese trade flow. By providing assistance to Baku in Nagorno-Karabakh, Turkey has actually tied Azerbaijan to itself. Here Ankara has already invaded the traditional sphere of responsibility and interests of Russia and neighboring Iran, which demonstrates its readiness to fight the Turkish-Azerbaijani alliance in its border area.

As you can see, the "sultan" really crossed the road to very many. But why did China take up arms against him, with which Turkey itself so passionately wants to make friends?

At firstAs it turned out, Beijing does not need such a mediator in its affairs with Europe, like Turkey, which is also a NATO member. The "logistics superpower" with all the accompanying trade markups and services that emerged on the "New Silk Road" is needed by the "Sultan", but not by the "Bogdykhan". We also note that Ankara supports the Uighurs, who pose a serious threat to the internal stability of the PRC. The Chinese in Central Asia absolutely do not need Turks with tame terrorists, just like Russia, by the way. Perhaps this is why Moscow turns a blind eye to the de facto legalization of the military presence of the PRC in Tajikistan, a member of the CSTO. Through the territory of this country, militants can penetrate from Afghanistan into the Xinjiang Uygur Autonomous Region, but now a full-fledged military base will appear on their way.

SecondlyBeijing clearly did not like the emerging tilt of Turkmenistan towards Turkey. Against the background of events in neighboring Afghanistan, Ashgabat finally made real steps towards joining the Turkic Union under the auspices of Ankara. It should be reminded that Turkmenistan is one of the most important gas suppliers to China, as well as to Russia. The transfer of indirect control over the export of energy resources to the Turks cannot please either Beijing or Moscow.

ThirdlyApparently, the Celestial Empire prefers not Turkey as a "window to the Mediterranean", but Syria, with which this conversation began. Syria has been the most important crossroads of key trade routes since ancient times. Thanks to military assistance to Damascus from Russia and Iran, now the SAR has become quieter, only the Turkish zone of "irresponsibility" with their "pocket" terrorists still poses a real threat to stability. Iran, which has received colossal investments from the PRC, can now be considered almost an economic vassal of the Celestial Empire. The Americans are going to leave Iraq in the very near future, which opens up an opportunity for connecting the Islamic Republic with the Mediterranean coast of Syria by a single railway network. And all this bypassing Turkey.

In general, the alignment is in favor of the Southern, and not the Median corridor, which is trying to take control of the "Sultan". Relations between Ankara and Beijing are deteriorating right before our eyes. It would seem that the PRC cares about the water level in the Euphrates, but the Permanent Representative of China to the UN Geng Shuang accused the Turks of damaging the water station and depriving the Syrians of access to clean water, and at the same time of the Turkish occupation of the northeast of the SAR. In response, Turkish UN Special Representative Feridun Sinirlioglu stated the following:

We will not learn from those who violate human rights and humanitarian law.
If anything, he meant China. Considering the extremely difficult relations between Russia and Turkey, we can only applaud Ankara's diplomatic "successes". You are on the right path, comrades!
Reporterin Yandex News
Reporterin Yandex Zen
12 comments
Information
Dear reader, to leave comments on the publication, you must sign in.