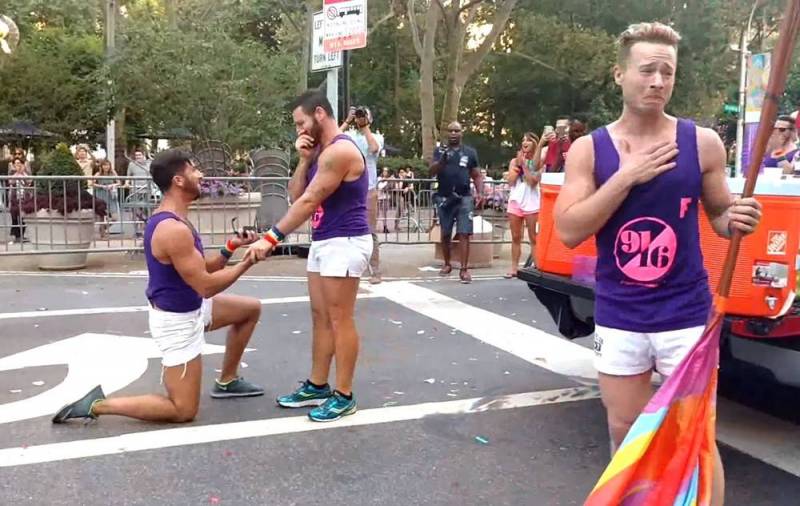 Among a fairly wide range of topics raised by Russian President Vladimir Putin during his speech at a recent meeting of the Valdai Discussion Club, global and conceptual issues undoubtedly prevailed. dissertation. The main thing, perhaps, in the rather lengthy speech of Vladimir Vladimirovich was occupied by the civilization crisis of the Western society built on liberal-democratic principles and the world capitalist system as such.


At the same time, the head of our state, in addition to the main challenges of our time - such as the coronavirus pandemic, military conflicts, obvious "distortions" and "overlaps" in the course taken by the "world community" to combat global warming, did not fail to pay enough attention to one more question. Specifically, that new “system of values” that the “collective West” is trying to assert more and more assertively and uncompromisingly in general, and its “gender” aspect - first of all. Is this issue so serious and important that it really deserves the close attention of the leader of a superpower? Let's try to figure it out.

"On the verge of a crime against humanity ..."

This is how Putin described the policies the attempts of the West to completely neutralize such fundamental concepts for normal human civilization as motherhood and fatherhood, the institution of the family, and the very sex of the representatives of the species Homo sapiens, as such. It is precisely the ideas that clearly smell like madness that a child should "choose his own gender", and not develop within the framework with which he, in fact, was born, that Vladimir Vladimirovich called "criminal."

Here is a specific example - not so long ago, not so long ago notorious for its fanaticism and intransigence in upholding the "rights" of a wide variety of perverts, the European Court of Human Rights issued another verdict, the essence of which boils down to a categorical statement that the "male model of behavior" does not even " is essential in the upbringing of boys. " Thanks to the litigants from the ECHR, at least for the fact that they have not yet recognized it as "harmful" and "contrary to human rights and freedoms", as well as various charters and conventions, which in the West are in defense of all sorts of "blue", "rosy" and other " multicolored "evil spirits managed to take in a huge amount. However, with these will become. Dashing trouble has begun ... Already not even slightly, but completely and completely damaged by reason on the basis of the "gender revolution", the precious "world community" is confidently and energetically moving in this direction. The evidence of this is very substantive and eloquent, literally innumerable.

Tired of hammering "rainbow" nonsense into the heads of people with some form of mentality, life position and worldview, the architects of the "beautiful asexual new world" decided to go for broke. Now they have come to grips with the kids. In the United States (and indeed outside of them) there is an active struggle today to "destroy gender stereotypes in the field of toys." Success is evident! Since 2017, the industry's leading industry group, the Toy Association, has firmly abandoned the “disgusting” custom of awarding the best toys for different genders. Signs and signs representing "the shameful sorting of toys by sex" are being destroyed in the sales areas of US specialty stores and supermarkets. From now on, they should be exclusively “inclusive”, not bearing “gender imprints”. "Well, and let it be?" Don't tell me ...

Hasbro Inc. at the beginning of this year proudly announced the rejection of the Mr. Potato Head (no more "Mr."!) And the intention from now on to release sets for children "with enough accessories to create all types of families." Long live the potato perverts for the little ones! Now it is clear where the “wind is blowing” and where is everything going? The introduction of appropriate "educational" programs into the school curriculum, within the framework of which students were taught how great it is to be "special" and "not like everyone else" and that "everything in this life can and should be tried" was only the first step. There is no doubt that those who are behind all this, ideally, would prefer to "process" children almost from the moment of birth, breaking their psyche and crippling their souls. Presumably, the relevant research is already underway.

It is not at all surprising that “ahead of the rest of the world” in the matter of completely etching out of the public consciousness of normal, traditional concepts about the relationship between a man and a woman, raising children and the like, as well as replacing them with “perfect phantasmagoria” (according to V. Putin) United States. Well, of course - "the citadel of democracy" and "bastion of progress". It turned out that the poison of propaganda of sodomite "values" and the vileness of rainbow "parades" and "prides", which had spread from this "citadel" rotted to the foundation, all over the world were just "flowers" in the attack on the normal human essence. It would seem, where is it worse? It turns out that there is always where.

The "law on equality", pushed today by the Biden administration and personally by the head of the White House, should destroy the very concepts of "man" and woman in the legal plane. " What is in return? A kind of "floor X". Literally the other day, a passport with just such a record, the first in the United States, was solemnly issued to a certain being who can in no way determine what it is. Against the background of this event, presented by the American and world media of the appropriate sense as an "epic victory of tolerance and progress," the presentation of admiral's shoulder straps in the USA to just some transgender, really, looks pale and not impressive. In order to get through the Americans who are already, perhaps, familiar to everything, we need stronger things. For example - the bill on forced sterilization of all men over 40 years old, as well as those of them who already have three or more children, which the deputy of his House of Representatives from the Democratic Party Chris Rab tried to submit to the US Congress.

No, later, when colleagues in the legislature (and not only Republicans) raised a universal high on this matter and began to vilify Rab's "lost shore" in every possible way, Mr. "Satirical and absurd." You see, he wanted with his help "to draw attention to the problem of the ban on abortion" and "to support the rights of women." It sounds, I must say, not too convincing - the document was worked out too in detail and scrupulously. It indicated everything, up to the size of fines "for evasion" (10 thousand dollars, by the way) and clear terms in which the forced vasectomy was to be performed (no later than six months from the date of the birth of the third child). And also many similar "little things", for "jokes" and "banter" are not at all typical. One way or another, but even if we assume that Mr. Rab at the moment was not acting in all seriousness, then this case very clearly demonstrates what specific cannibalistic ideas are "in the air" under the dome of the Capitol. Today it is a "joke", but tomorrow, you see, it is a completely authentic reality, which marks a new step in "achieving gender equality."

And all this could be considered the internal problems of the Americans themselves, commenting on those in the style of “what we fought for, we ran into it”, if such quirks were not imposed by Washington on literally the whole world, and by the most aggressive methods imaginable. The presence in nature of the "special diplomatic representative of the United States for LGBTQI rights" (such today is a certain Jessica Stern) says, you must agree, about a lot.

The struggle for these very "rights" is turning into a rather effective weapon of the geopolitical level. For example, the European Union in 2019, which sharply condemned the creation of "LGBT-free zones" in Poland, is currently punishing Warsaw financially. And not only for the egregious decisions from the point of view of Brussels on the primacy of Polish law over the EU directives, but precisely for these very attempts to get rid of the dictates of perverts. Escape from their aggressive propaganda and obsessive desire to replenish their ranks with as many adolescents and young people as possible. The same applies to Hungary, where the "rainbow" are also not welcomed in the least. As of now, both of these countries are left without payments under the Next Generation EU plan. They "froze" the first promised tranche, and, as they said in Brussels, "for an indefinite period." Budapest thus lost 1 billion euros (out of the promised 7,2 billion), and Warsaw and even more - 5 billion euros. In total, the Poles (both in the form of subsidies and in the manner of granting loans) were going to be allocated 36 billion euros. They will not give until they are imbued with “tolerance” and “new gender values”.

It was not in vain that Vladimir Vladimirovich paid special attention to this issue at Valdai and absolutely justifiably sharply criticized everything that the “collective West” is trying to create today. As the president said, "our differences with him concern the most fundamental principles" and at the same time, "the contradictions are getting stronger every year." For Russia, prospects, even in the most distant way similar to what is happening now in the same US or EU, are categorically unacceptable. There is even nothing to discuss here. In this regard, with the highest degree of probability, it should be assumed that sooner or later the next packages of tough sanctions will be introduced against our country by the “collective West” directly because of the refusal to follow its “gender” madness. But this is only one side of the issue. Vladimir Putin spoke quite unequivocally about the fact that the only direction, following which the population of the Earth has at least some chance to get out of the strip of cataclysms and crises that has piled on it, is the path of "moderate conservatism", which our country will by no means abandon. going. The rest are free to make their own choices. The only pity is that we have one planet for all.
Reporterin Yandex News
Reporterin Yandex Zen
13 comments
Information
Dear reader, to leave comments on the publication, you must sign in.