"Relations will not improve": why Nuland's visit to Moscow is doomed to failure 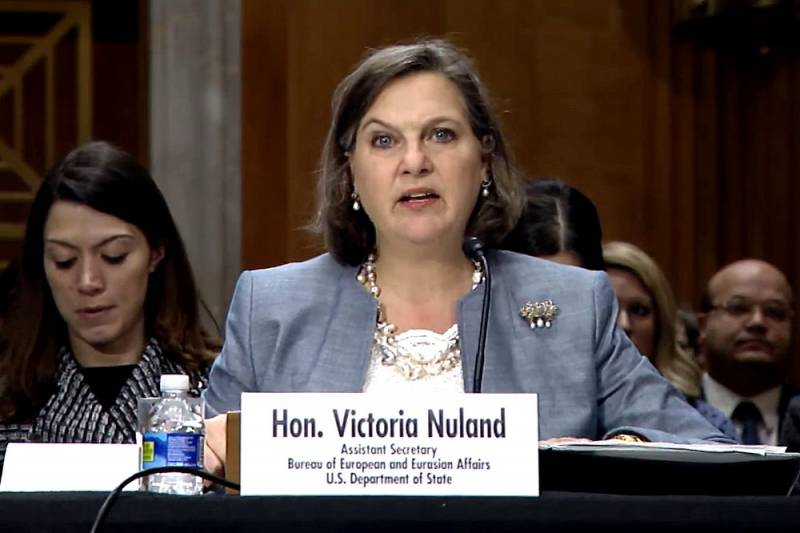 Judging by the results of the very first talks held in Moscow by US Deputy Secretary of State Victoria Nuland, a miracle will not happen. Her arrival in our country, on which, in truth, no one pinned special hopes on both sides of the ocean, will have absolutely no real consequences for the improvement of the US-Russian relations that are now "at the point of complete freezing". And the point here is not only in the personality of the guest herself, who is just as stubborn Russophobic as she is a professional diplomat. In the end, the Anglo-Saxon gentlemen (and ladies) know how to attack personal sympathies and antipathies, as well as their own "convictions" without any reflections - there would be a benefit from this.


The problem is that at the moment Washington and Moscow have practically no space left in which they could "maneuver" opponent. The only promising direction could be an attempt to normalize relations between countries by refusing at least the most powerful mutual confrontational measures. At the same time, the "first fiddle" in such a process would have to be played by the Americans - after all, they are the "attacking" side in this case, and Russia is only the "defender", taking inevitable retaliatory measures. Alas, it is hardly worth relying on anything like that. Why is the dialogue between our countries doomed to continue moving into a dead end?

After her meeting with Deputy Foreign Minister of Russia Sergei Ryabkov, Mrs. Nuland declined to comment on the results of the negotiations, which in itself testifies to a lot. In turn, our high-ranking diplomat was more frank and eloquent, but the results he announced do not inspire any optimism. According to Mr. Ryabkov, one cannot count on any progress along the Washington-Moscow line. Rather, it is about "further aggravation" in the leading areas of interaction. What can we talk about if at least a hint of consensus could not be reached even on those issues that are directly within the competence of the departments that were represented by the participants in the negotiations. According to the Russian side, a very specific proposal was made to the guests: to remove all current restrictions on the work of foreign institutions of both countries, which have practically reached the level that makes the normal work of diplomatic missions impossible. Judging by the words of Sergei Ryabkov that "the positions of the parties in the negotiation process did not fit well together" and his negative forecasts for the future, such a generous and open gesture of our Foreign Ministry on the part of the US representatives did not meet with understanding. And this, at first glance, is rather strange. Indeed, as recently as last week, Joe Biden was officially approached by a whole group of members of the US Senate (including, by the way, both Democrats and Republicans), demanding that the head of the White House “immediately take measures to proportionally increase the number of American diplomats on the territory of Russia ”.

This would seem to be a great opportunity to bring this aspiration to life. Refuse mutual restrictions, simply "return everything as it was." However, as we can see, the State Department is not at all eager to act according to such a scenario. Obviously, official Washington is closer to the proposal expressed by senators concerned about "parity" on "expelling three hundred employees of the Russian Embassy in the United States" in the event "if Moscow refuses to make concessions." And nothing that, according to Maria Zakharova, who clearly owns the corresponding figures, there is simply no such number of our diplomats overseas? It seems that this is not the main thing - the key word in the ultimatum developed under the dome of the Capitol is the word “concessions”. The same Ryabkov states: "The Americans absolutely do not listen to our demands and proposals, do not even want to try to understand their essence and logic." But everything is quite simple: for the umpteenth time, Moscow is trying to get from Washington that their relations be based on the principles of mutual respect, equal partnership and consideration of mutual interests. However, to all appearances, it is precisely these simple and fundamental principles for diplomacy as such that are unacceptable to the Americans. Russia, through the lips of its representatives, once again declared that it “does not seek further escalation of confrontation,” but in no case will it leave further hostile actions unanswered. Will they hear? That is unlikely. In this regard, the general meaning of Nuland's visit to our country, which the State Department had to prepare and carry out, overcoming considerable difficulties, becomes not very clear. Is all this - solely for the sake of demonstrating the appearance of maintaining a relationship, in fact, experiencing the most real agony?

The only ones who have a clear and clear answer to the question posed above are representatives of the inadequate tribe of professional “patriots” “nezalezhnoy”. The local media are now full of headlines like: “Victoria Nuland arrived in Moscow to resolve the“ Ukrainian issue ”, and local experts are vying with each other to discuss: on what topics does the overseas guest intend to bend the Kremlin especially harshly? One of them, for example, assures that "the Russian authorities will be exposed to a considerable bill for inappropriate behavior and an unjustified increase in the price of gas in the light of the restriction of its supply." Well, and, of course, the first thing the deputy head of the State Department will do is to "build" a host for "aggression against Ukraine." The absurdity of such assumptions is quite obvious to everyone - but not for the representatives of Kiev, recently, despite all conceivable and inconceivable realities, who again believed in the "unbreakable American support" that will remain with them. For example, remembered by all his enchanting statements of "cosmic scale and cosmic stupidity", seemingly quieted down for a while, but again showing signs of falling into a rampage, the former head of the Ministry of Foreign Affairs of Ukraine Pavel Klimkin recently proclaimed that today "the key to Kiev gained the upper hand over Russia is the strength and toughness of the United States. " Win with your sim! He can be said to be echoed by the head of the presidential office Andriy Yermak, following a meeting with his counterpart Nuland, US Deputy Assistant Secretary of State Robin Dunnigan, who visited the “non-railway” office, he declared “the need to involve the American side in the negotiations on Donbass”. Dannigan himself, which is characteristic, did not utter a sound on this issue. Nevertheless, a new hope has already blossomed in Kiev.

It should be noted that, to a certain extent, the fantasies of the local witnesses of the “almighty America sect” were also fueled by Dmitry Medvedev's article, in which he bluntly stated that any negotiations regarding the “non-existent” Moscow would conduct “with the overlord, not with the vassals”. So here he is - the extraordinary and plenipotentiary representative of this very suzerain! Well, he'll show you now! In fact, there is simply nothing to "show" Mrs. Nuland in Moscow. Yes, among her few meetings, a conversation with Dmitry Kozak, who oversees the corresponding block of issues in the Kremlin, is also planned. However, what can a representative of the State Department say to him that would correspond to the bright hopes of Kiev? Nothing at all. Some experts (not Ukrainian, of course) even before the start of the visit suggested that, through its lips, Washington could offer Russia a “exchange” of Ukraine, which had long become a “bad asset”, for ... There was always a pause in their thoughts. And really, what would the Americans want from us in exchange for changing their policy in this direction? At least - to give up militarytechnical support "non-profit"? Versions were put forward, one more intricate than the other: "the severance of relations with China" (or at least a sharp decline in their level), "withdrawal from Syria", "consent to the deployment of American military bases in the former Central Asian republics of the USSR to compensate for the withdrawal of US troops from Afghanistan" etc. There is nothing to even discuss about the first two options: a quarrel between Moscow and Beijing to please Washington is absolutely impossible under any circumstances (at least in the current realities and circumstances). From Syria, as well as from the rest of the Middle East, the Americans themselves are about to get out completely.

But the third assumption turned out to be very close to the truth. Something of the kind was clearly discussed, but ... Sergei Ryabkov, following the meeting with Nuland, also stated the fact that it was unambiguously communicated to her that "the military presence of the United States in any Central Asian countries is completely unacceptable for Russia." The question is closed. What else? Only madmen can blackmail our country with restrictive measures against Nord Stream 2 in the conditions of the current energy crisis, which is gradually turning into a catastrophe. The Europeans will tear them to shreds! New sanctions? Members of Congress and Ukrainian “patriots” who have zealously persuaded each other that because of them “the Russian economy stagnates and is about to collapse completely. " Limiting and Controlling Nuclear Arsenals? This is how the negotiations on this issue are going on - it is true, neither shaky nor shaky and without any special results. Other items for bargaining, as it were, are not seen.

If the United States really wanted to negotiate something with our country, they would think a hundred times before sending a person to Moscow for this, whom they would definitely not be happy with, and who is under sanctions for her unparalleled Russophobia. Yes, some cookies on the Kiev "Maidan" are worth something - Nuland will not forget them and will not forgive forever. Nevertheless, it was she who was sent. Both this and the first impressions of "constructive communication" voiced by our diplomats indicate that Washington, apparently, decided to make a purely symbolic gesture, allegedly indicating "readiness for dialogue." In fact, the only practical sense of this visit will remain the mutual selective lifting of personal sanctions from a number of persons on both sides of the “barricades”. Well, at least something.
Ctrl Enter
Noticed oshЫbku Highlight text and press. Ctrl + Enter
We are
How Ukraine break Putin's plan: six tips Zelensky
Ukraine from the inside: traitors, curators and those who watch from the Kremlin
Reporterin Yandex News
Read Reporterin Google News
Ad
We are open to cooperation with authors in the news and analytical departments. A prerequisite is the ability to quickly analyze the text and check the facts, to write concisely and interestingly on political and economic topics. We offer flexible working hours and regular payments. Please send your responses with examples of work to [email protected]
10 comments
Information
Dear reader, to leave comments on the publication, you must sign in.