Nuclear weapons against aircraft. Nuclear Anti-Aircraft Missiles: Are They Needed? 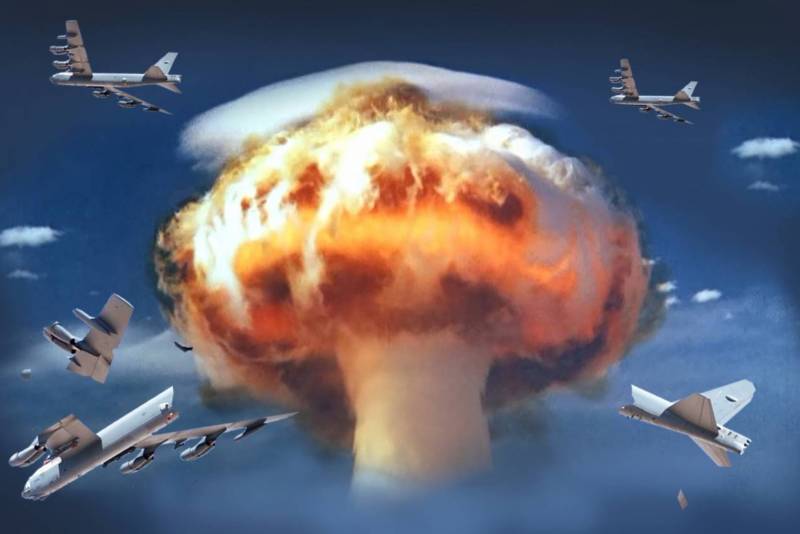 Anti-aircraft guided missiles (SAMs) with nuclear warheads (YBCH) are rarely written in the media. Perhaps not everyone even knows about their existence. Moreover, this topic may be of interest to many readers interested in military technique.


We will not touch upon interceptor missiles of anti-missile defense (ABM) complexes here, which represent a separate type of weapon.

What is a nuclear warhead on an anti-aircraft missile for?

Since the 1950s, tactical (ie, non-strategic) nuclear weapons have been viewed by the military as a “magic” means of achieving victory over a numerically superior enemy on the battlefield. Air defense means (air defense) were no exception, and as soon as nuclear bombs became compact enough, projects for their use on anti-aircraft missiles appeared.

A nuclear explosion in a dense formation of enemy bombers is capable of hitting several aircraft at once. If they carry nuclear bombs, then this has a huge military effect, allowing you to save a large number of people, weapons, infrastructure, etc.

At the same time, the requirements for the accuracy of guiding an anti-aircraft missile to a target are significantly reduced. The use of one SAM with nuclear warheads replaces the launch of several units or even several dozen missiles with conventional warheads.

Interestingly, at different times, nuclear warheads were equipped with not only long-range missiles, but also medium-range missiles.

SAM with nuclear warheads received the American anti-aircraft missile system (SAM) CIM-10 Bomarc ("Bomark"), which was in service in the 1960s. It was the only ultra-long-range air defense system in history.

The missiles of this complex had unrivaled characteristics so far: speed - up to 4 M (4 speeds of sound) and a range of more than 700 km. This was achieved through the use of ramjet engines.

Initially, the device was developed as a reusable unmanned fighter-interceptor, which was supposed to hit targets with air-to-air missiles, but due to the too high complexity of such a system, it was "converted" into a missile defense system (or anti-aircraft projectile aircraft). 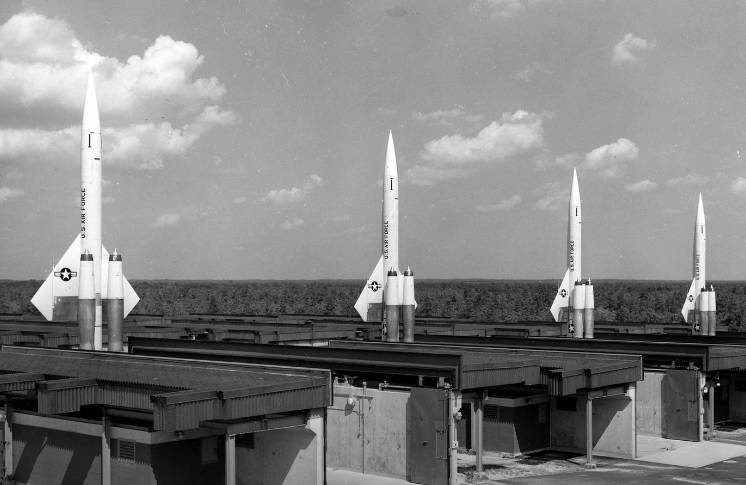 The air defense system was planned to be located at 52 bases. They were supposed to cover the entire perimeter of the United States, protecting them from flocks of Soviet bombers. In fact, only 10 missile squadrons were deployed in the most threatened direction: in the northeast of the United States and in Canada.

Almost all deployed missiles (several hundred units) had W40 nuclear warheads with TNT equivalent of 10 kilotons (kt), the explosion of which ensured the destruction of aircraft within a radius of 800 m. 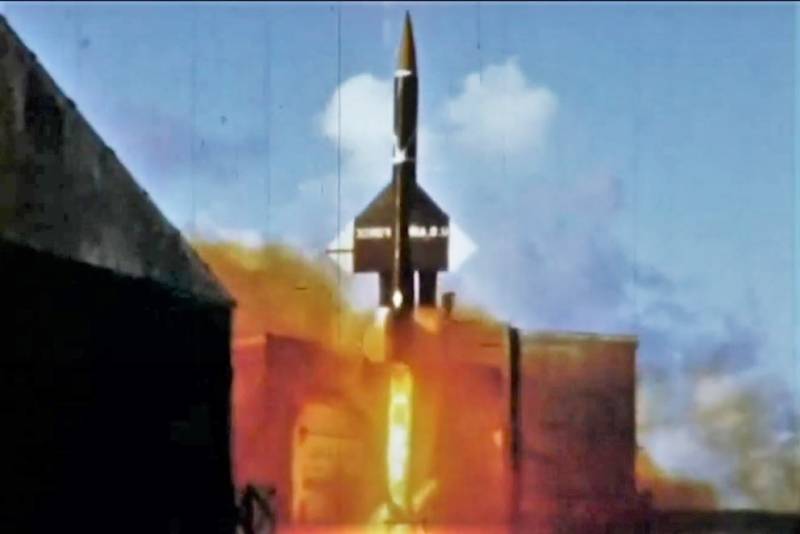 The defeat of enemy aircraft was to take place over the territory of Canada. This caused an active protest from the Canadian population and became one of the reasons for the removal of the complex from service in 1972. Another important reason for this was a significant decrease in the role of strategic bombers in the Soviet "nuclear triad" due to the buildup of an arsenal of intercontinental ballistic missiles, against which the "Bomark" was completely helpless.

Similar ultra-long-range air defense systems with nuclear warheads were also developed in the USSR by the design bureaus of Tupolev, Myasishchev and Chelomey. But these projects did not materialize: they were scrapped at a fairly early stage.

For the first time, SAM with nuclear warheads received the American surface-to-air missile system (SAM) MIM-14 "Nike-Hercules", the world's first long-range air defense system. It was capable of destroying air targets at altitudes up to 45 km and at a distance of up to 140 km. He was in service in the United States from 1958 to 1974 (in other countries - until 1989). 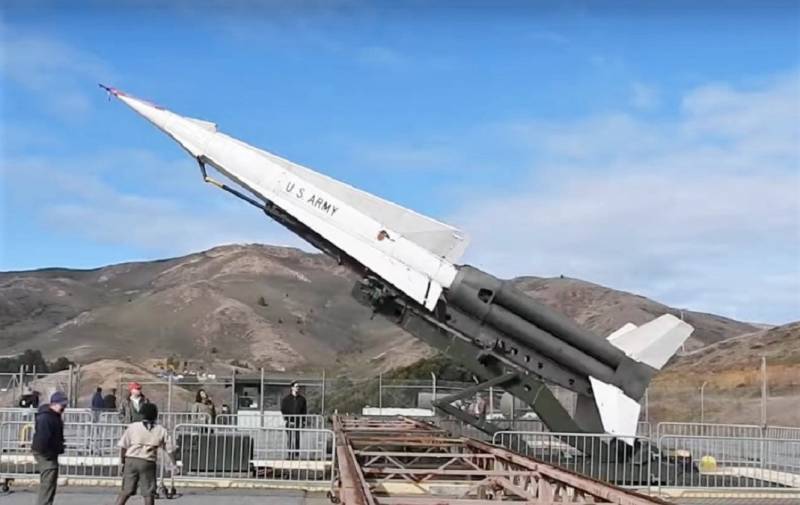 Almost all missiles of this complex deployed in the United States carried nuclear warheads W31 with a capacity of 2 or 40 kt. Nuclear missiles were also deployed on the territory of Germany, Italy, Greece, Belgium, the Netherlands, Turkey and South Korea.

This complex was stationary. Interestingly, in this regard, in case of a rapid enemy offensive, it was provided for the use of this missile on the ground. At the same time, the rocket flew to the target at a high altitude, after which it dived vertically at it. This option was provided for missiles with both conventional and nuclear warheads.

In 1960, during the tests of the "Improved Nike-Hercules" complex, its missile defense system with nuclear warheads first shot down a ballistic missile (it was a tactical MGM-5 "Corporal"). 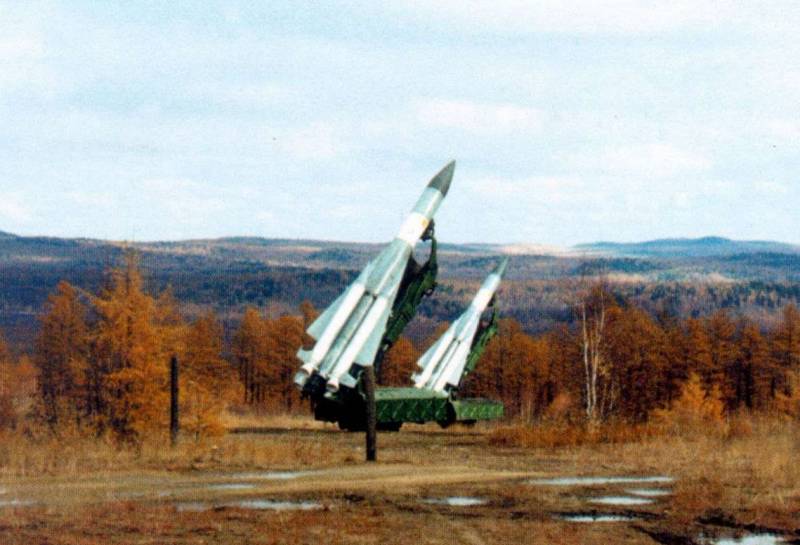 Some missiles of this air defense missile system (5V28N and 5V28MN) were equipped with nuclear warheads TA-18, which had two variants of operation: up to a certain height, only an atomic charge worked, hitting targets with a shock wave; at high altitudes, a thermonuclear component was added to it, which provided the most powerful neutron radiation, which is the main damaging factor in rarefied air.

Many dozens of S-200 divisions of various modifications were deployed on the territory of the USSR, North Korea, Mongolia, Syria, Iran and the Warsaw Pact countries.

Only a relatively small proportion of these missiles had nuclear warheads. According to unofficial data, outside the USSR, they were only at the divisions stationed in the territory of the GDR.

Until the mid-1990s, the S-200 air defense systems of all modifications were completely removed from service in Russia as morally obsolete.

The first Soviet air defense system S-25 "Berkut" had a target destruction range of up to 35 km at altitudes from 3 to 25 km. It was very expensive and difficult to operate, and therefore was used to cover only one, the most important territory in the country - the city of Moscow.

A total of 56 regiments were deployed, each of which had 60 missile launchers, three of which had a 20 kt nuclear warhead with a radius of 1 km.

At the beginning of 1957, at the Kapustin Yar test site, as part of the state tests of the S-25 complex, a test launch of a nuclear missile ZUR-215 against air targets at an altitude of 10,4 km was performed. At the same time, according to the available information, two radio-controlled front-line bombers Il-28, located at distances of approximately 0,5 and 1 km from the explosion, were successfully hit.

The RIM-2 "Terrier" was the first shipborne air defense system and was in service from 1956 to 1989.

In 1962, a SAM-N-7 BT-3 (N) missile (aka RIM-2D) with a W45 nuclear warhead of 1 kt appeared in its composition. It was intended for use on groups of bombers, torpedo bombers and anti-ship cruise missiles. This SAM had a range of up to 36,5 km with a target flight altitude of up to 24 km.

The legendary Soviet medium-range S-75 complex became the first mass air defense system in the USSR and had several modifications. It could hit air targets at ranges up to 47 - 55 km and altitudes up to 30 - 35 km. 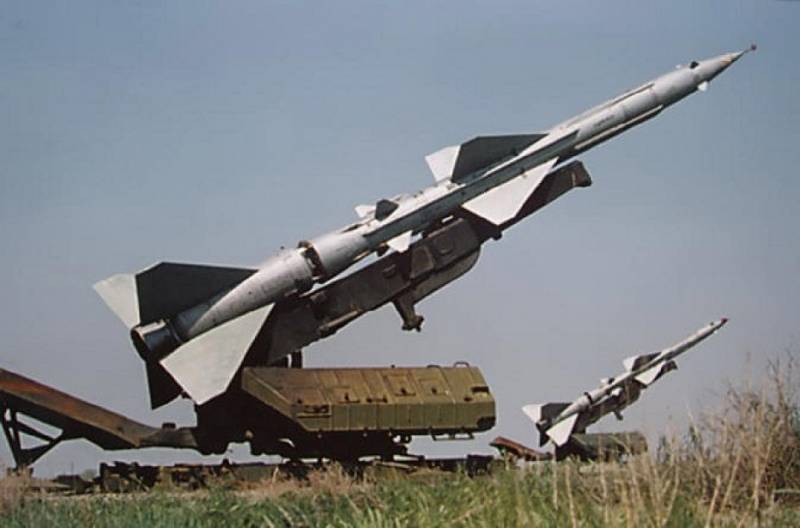 The first S-75 was put into service in 1957. He stood and is in service with many countries, took part in several wars and proved to be a very successful weapon system.

To defeat group targets, this air defense system also had a 5V29 missile with a RA-52 nuclear submarine with a capacity of 10 - 15 kt.

Since 1979, the obsolete S-75 began to be replaced by the newest S-300PT "Biryusa" with the same maximum range and target engagement height.

It is known that in the 1980s for the S-300PT and S-300PS Volkhov M-6 air defense systems, a 5V55S missile with a nuclear warhead with a power of 1,5 kt was developed. However, it is not known about its entry into the troops from open sources.

It is a further development of the S-300 air defense system family. It also uses different missiles to hit different types of targets.

According to available information, a low-power nuclear warhead was developed for the 48N6 missile (range - about 200 km). But there is no open data on its production.

Prospects for the use of nuclear missiles

A significant increase in the accuracy of aviation weapons, the emergence and widespread deployment of high-precision air, sea and land-based cruise missiles, a clear tendency to "humanize" air strikes made the massive use of strategic aviation unnecessary.

"Clouds of bombers" are a thing of the past, and with them the need to use anti-aircraft missiles with nuclear warheads, which were removed from combat duty in the United States and the USSR, disappeared.

Apparently, in the coming decades, the general nature of air (aerospace) warfare will continue to change towards the use of high-precision, high-speed and space strike weapons. Therefore, there is no reason to believe that missiles with nuclear warheads can be useful to any country.

Nuclear warheads, apparently, will be in demand for a long time on missile defense interceptor missiles, but this type of weapon is beyond the scope of our review.

The Russian S-500 system currently being deployed will combine the functions of air defense, missile defense and anti-space defense (anti-space defense). But for different types of targets, different missiles will be used, while only missiles for hypersonic high-altitude targets (such as ballistic missile warheads and satellites) will have nuclear equipment.

Anti-aircraft missiles with nuclear warheads are intended for use against groups of bombers marching in close formation.

SAMs with nuclear warheads were created and were in service only in the USA and the USSR, since only these countries had such a need and opportunity for this.

Today, nuclear missiles (interceptor missiles are not considered here) are not in operation, since there are no reasons for their use in the present and future.
Ctrl Enter
Noticed oshЫbku Highlight text and press. Ctrl + Enter
We are
Space shield of the Motherland: the West is not in vain afraid of Russian inspector satellites
New weapons on the way: What is known about the anti-satellite complex "Burevestnik"
Reporterin Yandex News
Read Reporterin Google News
Ad
We are open to cooperation with authors in the news and analytical departments. A prerequisite is the ability to quickly analyze the text and check the facts, to write concisely and interestingly on political and economic topics. We offer flexible working hours and regular payments. Please send your responses with examples of work to [email protected]
2 comments
Information
Dear reader, to leave comments on the publication, you must sign in.