Icebreakers PLO: What should be the Arctic fleet of the Russian Navy 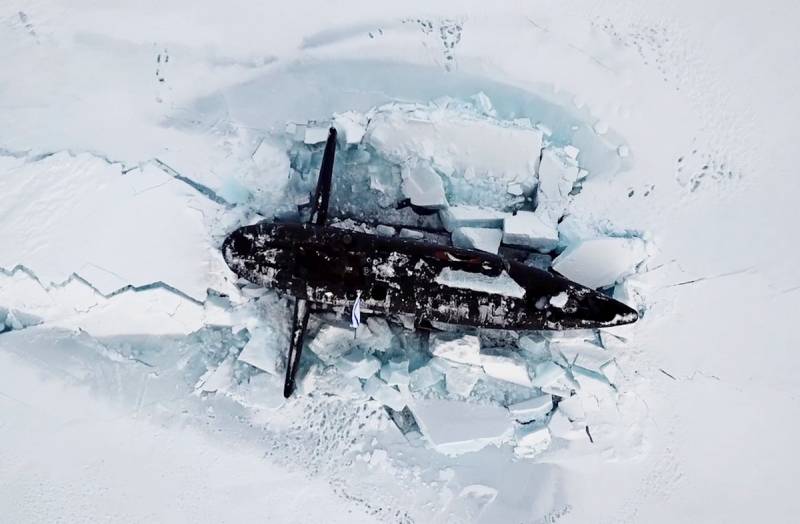 A few days ago, information leaked to the domestic press that the RF Ministry of Defense was allegedly considering the creation of the Arctic fleet. Soon this message was denied by another agency, but some understatement and intrigue remained. Whether Russia needs another, fifth in a row, navy, let's try to figure it out.


According to IA TASS citing its own source, Russia may have another naval force in the Arctic:

This will be a separate formation within the Navy, the main task of which will be to ensure the safety of the Northern Sea Route and the Arctic coast in the area of ​​responsibility of the Northern and Pacific fleets.
The nuance lies in the fact that our country already has the Northern Fleet of the Russian Federation, whose area of ​​responsibility includes the Arctic region. Moreover, the fleet has recently received the status of a military district, which only underlines its importance. But there is another opinion, according to which, in the changed geopolitical situation, the warships of the North Sea people are now more needed in the far sea zone, and someone will have to leave the permanent protection of our northern borders to someone. Allegedly for the formation of such an Arctic fleet, the first Russian truly combat icebreakers of project 23550 Ivan Papanin and Nikolai Zubov are being built. It sounds, at first glance, quite plausible, but should we expect the emergence of an entire icebreaker-class combat fleet in our country? Will the Russian Defense Ministry return to the Shtorm aircraft carrier in the future?

For an adequate answer to this question, we need to understand what specific threats the sailors of the hypothetical Arctic fleet will have to face. The real adversary in this region, as, indeed, everywhere else, for Russia are the United States and the NATO bloc. Since we are talking about a theoretical collision in the Arctic Ocean, we will talk about the surface and submarine forces of the Americans and their allies.

How do we repeatedly told, at sea there is no more terrible force than an aircraft carrier strike group (AUG). Carrier-based aircraft are capable of being the first to send to the bottom any enemy that does not have its own aircraft carrier with a cover air wing and an AWACS aircraft. In the far sea zone, only another AUG can go against the AUG, counting on victory. However, when it comes to fighting in the Arctic Ocean, there are a couple of extremely important nuances.

At first, due to the extreme climatic conditions in the Arctic region, there is nothing to do without a powerful icebreaker escort fleet. Note that the United States hastily began building its icebreakers, but even having received them, the AUG will not have the usual freedom of maneuver and action among the ice.

SecondlyRussia occupies an extremely advantageous geographical position, having the longest coastline in the Arctic Ocean. De facto, this is not a distant, but a near sea zone for us. This means that the RF Ministry of Defense can create on its Arctic coast a whole network of military air bases and jump airfields. Against American carrier-based aircraft that would dominate anywhere in the Atlantic or Pacific oceans, we can deploy our own coastal fighter aircraft, as well as an echeloned air defense / missile defense system. Trapped in ice and unable to freely maneuver, the AUG ships will indeed turn into easy targets for Russian naval aviation and operational-tactical missile systems. The surface fleet of a potential enemy, having lost the factor of total air superiority, will be one tooth for the Severomorians.

It turns out that we simply do not need to create an armada of ice-class ships and aircraft carriers. Several patrol icebreakers of Project 23550 as armed traffic controllers will be quite enough.

This is a much more real threat. Nuclear submarines equipped with Trident-2 intercontinental ballistic missiles are extremely dangerous for Russia. Not only Russian, but also American submarines are on alert under the ice of the Arctic polar cap.

So, in 2020, the USS Toledo attack submarine carried out a demonstrative surfacing through the ice. US Submarine Force Commander Vice Admiral Daryl Coadle commented on this as follows:

The Arctic is a potential strategic corridor - between the Indo-Pacific region, Europe and the United States. Submarine forces must maintain readiness, operating in arctic conditions, to ensure the protection of interests and national security, as well as maintain a balance of power in the region and Europe, if required.

What conclusions can we draw? In the Arctic region, the real threat to Russia is not so much surface ships as submarines. To counter the AUG of the US Navy, if for some reason it suddenly decides to enter the Arctic Ocean, the forces of naval aviation, air defense / missile defense systems and OTRK will be quite enough. But to stop the threat from American submarines, perhaps it is worth starting the development of a new type of ship.

Probably, these should be anti-submarine warfare icebreakers carrying specialized UAVs and helicopters on deck. Perhaps it is worth making them on the project 23550 platform, taking into account the assigned PLO tasks. It turns out that if Russia should have some kind of separate Arctic fleet, then this is exactly what it is.
Ctrl Enter
Noticed oshЫbku Highlight text and press. Ctrl + Enter
We are
RTOs and "Varshavyanka" - our military response to the Americans
"Internal kitchen" of the Navy. Construction wars for access to the budget of the Ministry of Defense
Reporterin Yandex News
Read Reporterin Google News
Ad
We are open to cooperation with authors in the news and analytical departments. A prerequisite is the ability to quickly analyze the text and check the facts, to write concisely and interestingly on political and economic topics. We offer flexible working hours and regular payments. Please send your responses with examples of work to [email protected]
6 comments
Information
Dear reader, to leave comments on the publication, you must sign in.