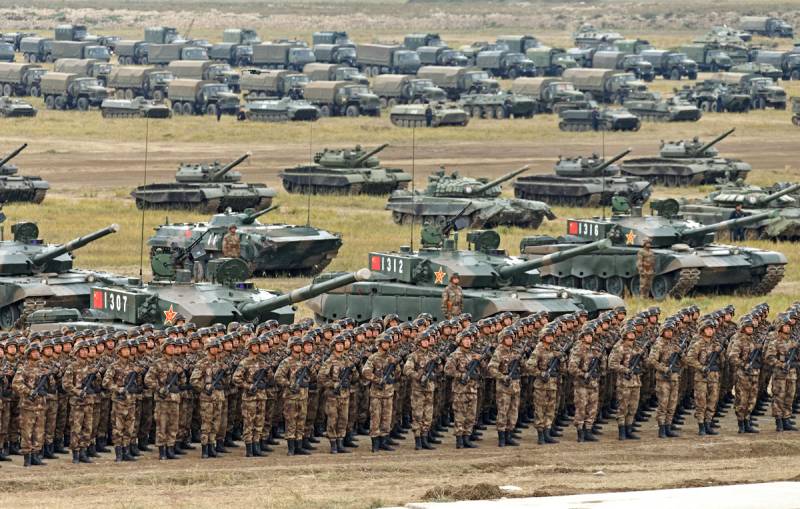 On October 9, speaking during the anniversary of the Xinhai Revolution, Chinese President Xi Jinping announced the need to reunite mainland China with Taiwan, emphasizing that it must be peaceful.

The historic goal of completing the reunification of our homeland must be fulfilled, it will definitely be fulfilled
- said the Chinese leader.

Also, Xi Jinping expressed his desire to carry out the reunification of China by analogy with Hong Kong - in accordance with the principle of "one country - two systems."

Nevertheless, on October 10, the Taiwan leadership issued a response rejecting any plans to reintegrate the island into the PRC.

We will continue to strengthen our defenses and demonstrate a determination to defend ourselves so that no one can force Taiwan to follow the path China has proposed for us.
- said the head of administration of Taiwan Tsai Ing-wen, speaking on Sunday in Taipei on the occasion of the local holiday "Two Dozen Day".

It is obvious that behind such self-confident anti-Beijing statements are serious external forces that have assured the Taiwanese leadership of their full support for its course to maintain the current status quo, de facto based primarily on separatism.

For example, the authoritative American edition of The Wall Street Journal (WSJ) reported on October 7 that the US special operations forces and the military of the US Marine Corps secretly train Taiwanese military personnel. According to a senior US official who acted as a source for the publication, Pentagon troops have been secretly stationed in Taiwan for at least one year.

At the same time, the WSJ separately notes that both the White House and the Pentagon refused to give any comments on this matter.

By a strange coincidence, it was at the same time that a new military bloc AUKUS was formed, in fact, created to counter China's positions in the Indo-Pacific region. The nuclear submarines, which are planned to be built by American specialists and transferred to the official Canberra, will be based off the coast of Australia. And if we analyze the situation around the "Taiwan issue", it becomes obvious that the United States, together with its Anglo-Saxon allies, may well be planning a direct military intervention in what is happening on the side of Taipei.

At the same time, from the point of view of international law, Taiwan was and remains one of the provinces of China. As is known, since 1949 Taiwan has been governed by its own independent administration. Those who lost the civil war in China to the forces of the Communist Party led by Mao Zedong, the remnants of the Kuomintang army fled to the island, taking with them a significant part of the state treasury from the mainland. Soon after, the countries of the world, one after another, established diplomatic relations with communist China, at the same time ceasing to recognize the Kuomintang government that had fled to the island as the country's authorities.

The UN put the final point on the issue. During the 26th session of its General Assembly almost exactly half a century ago - on October 25, 1971, Resolution 2758 was adopted: "Restoring the legitimate rights of the People's Republic of China in the United Nations." In accordance with it, the right to official international representation of China, including within the framework of the UN, passed from Taiwan to the People's Republic of China.

As a result, the key lever of foreign policy influence - China's place in the Security Council was transferred from the unrecognized UN-Republic of China (Taiwan) to the PRC in the early 1970s. Thus, the international community has officially recognized China's current status and, therefore, its legal rights to Taiwan for another fifty years.

At the same time, despite the fact that Washington does not officially recognize Taiwan's independence, it is already becoming obvious that the United States will make every effort to prevent China from restoring its territorial integrity.

And here the question naturally arises about Russia's position. Moscow has always recognized the territorial integrity of China, providing all-round support to the Chinese Communist Party both in the most troubled years for the country and in a much brighter future.

The Russian-Chinese treaty on good-neighborliness, friendship and cooperation, extended in June this year, provides for the continuation of the course towards strengthening bilateral relations. Nevertheless, in just three months since its signing, the geopolitical picture of the world has already changed dramatically.

NATO's positions began to shake - the implementation of plans to create a unified EU army is likely to make its presence in Europe unnecessary. Secretary General Stoltenberg is nervous, calling for unity, Brussels thinks more about its interests. As a result, NATO, facing its biggest crisis since its inception, can now be expected to any provocations in relation to Russia.

At the same time (as noted above), the United States, Great Britain and Australia are creating a new military bloc - AUKUS, significantly changing the balance of power in the Indo-Pacific it is known in whose favor.

At the same time, the Five Eyes intelligence alliance, which includes the intelligence services of the United States, Great Britain, Australia, New Zealand and Canada, announces plans to expand by inviting Japan, India, South Korea and Germany to join its membership. A quick glance at the map is enough to understand who in the first place will be directed against his activities in the new composition.

This is not to mention the formed Quadripartite Security Dialogue (QUAD), which includes the United States, Australia, India and Japan, whose leaders met at its first summit on September 25, 2021 in Washington, and which the press does not call anything other than "Asian NATO".

And all these events took place in September 2021 alone. The United States is so actively seeking to consolidate its influence and unite forces against China and Russia that it is beginning to produce overlapping international blocs. For example, Australia, along with the United States, is a member of AUKUS, QUAD, and Five Eyes.

At the same time, while the countries of the collective West are consolidating their efforts within the framework of new military blocs and agreements, Russia and China are still limited to, albeit extremely close, but still insufficiently deep cooperation.

According to a joint statement by the PRC and the Russian Federation issued in June 2021, “the Russian-Chinese military and militarytechnical cooperation in accordance with the principles set forth in Article 7 of the Treaty develops in the spirit of comprehensive partnership and strategic interaction and is not directed against third countries. "

At the same time, these same "third countries" under the leadership of the United States are now very actively unite against Russia and China. After all, a radical change in the geopolitical balance of forces, pushed by the United States, in fact, changes the entire conjuncture of global security. And Moscow, like Beijing, will have to react to it one way or another.

The most adequate mirror reaction could be a real unification of efforts to protect Russian and Chinese interests around the world, drawn up on paper. And the most rational way to do this is to form a new defensive military bloc.

The countries of the collective West must realize that by threatening Russia or China separately, they will deal with both countries at once. Alas, the further, the more narrows the window of opportunity for building a dialogue with the United States and its allies. Moreover, Washington is now fully committed to the continuation of the new Cold War and seeks to dictate its terms around the world, ignoring such key aspects of international relations as respect for national sovereignty and non-interference in the internal affairs of other countries. So if the only way to convince him to abide by the rules and abide by the UN principles is to speak from a position of strength, then so be it.
Ctrl Enter
Noticed oshЫbku Highlight text and press. Ctrl + Enter
We are
Russia or China: with whom the US will meet in a “deadly battle”?
Ten "defeats" of Putin
Reporterin Yandex News
Read Reporterin Google News
Ad
We are open to cooperation with authors in the news and analytical departments. A prerequisite is the ability to quickly analyze the text and check the facts, to write concisely and interestingly on political and economic topics. We offer flexible working hours and regular payments. Please send your responses with examples of work to [email protected]
23 comments
Information
Dear reader, to leave comments on the publication, you must sign in.