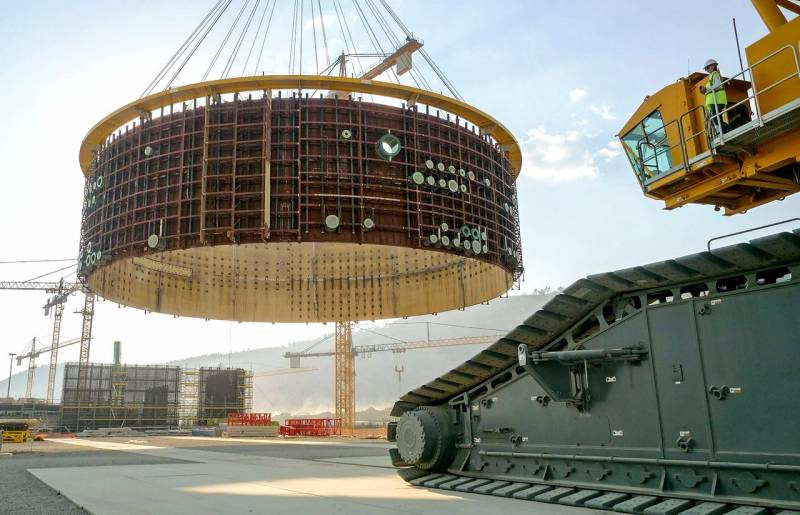 A few days ago, a meeting between Presidents Putin and Erdogan took place in Sochi. In just three hours, the Russian and Turkish leaders managed to discuss a lot of issues, including the situation in Syria, Nagorno-Karabakh, as well as the possibility of partial localization of the production of the S-400 air defense system abroad and transferring projects to Rosatom to build two more nuclear power plants on the Black Sea coast of Turkey. It is worth talking about the latter in more detail.


Let's put it bluntly: given the tense situation in Idlib, where the Russian Aerospace Forces and government troops of the SAR are clearly preparing revenge for the Turks, President Erdogan's proposal to give contracts for two more nuclear power plants looks like an attempt to “butter up” the Kremlin. We immediately picked up this idea with joy, but is it worth it to be on the "gifts of the Sultan"?

Why is it unprofitable

At present, Rosatom, through its subsidiary, is completing the construction of the first nuclear power plant in Turkey called Akkuyu. The first power unit should start working in 2023, and after the commissioning of all four, Ankara will be able to count on a total capacity of 4800 MW. The benefit for the Turkish side is beyond doubt, which, alas, cannot be said about the Russian side.

It is generally accepted that the contractor simply hands over the constructed nuclear power plant to the happy owner and takes care of its subsequent maintenance as a technical consultant, fuel supplier and other consumables. However, Rosatom decided to be creative and apply an “innovative” business model, which is called “build-own-operate” (in English - BOO, Build-Own-Operate). This means that its subsidiary structure will own 99,2% of the shares, and the problem of recoupment of the project will fall solely on the shoulders of the state corporation.

Also, Rosatom failed to get the Turks to undertake obligations to buy out certain volumes of electricity at a certain fixed price. All Ankara agreed to was to buy 70% of the generated volumes from the first two power units at a price of 12,35 US cents per kilowatt / hour during the first 15 years, and 30% from generation from the next two. At the same time, after the NPP reaches recoupment, Turkey will receive 20% of the power plant's net income. Luxurious conditions, you will not say anything! Note that Rosatom will somehow have to recoup the invested $ 22 billion. It is obvious that Akkuyu is an extremely dubious business project for Russia in all respects. To his political component we will return in more detail a little later.

And here we are offered to build two more similar nuclear power plants, in Sinop and Igneada.

It is assumed that the second nuclear power plant in Turkey will appear near the city of Sinop. The capacity of its four power units is 4800 MW. It was supposed to be built by a consortium of the Japanese company Mitsubishi and the French company Framatome. The project cost was $ 22 billion, like our Akkuyu. However, after the disaster at Fukushima-1, contractors made adjustments to the project, and the estimate doubled, to $ 2 billion. Ankara refused to cooperate with the Franco-Japanese consortium, but with technical Sinop's point of view is the most prepared platform. The situation is somewhat different with the project in Ingleada, which is also located on the Black Sea, just 10 kilometers from Bulgaria. The third Turkish nuclear power plant was to be built by the Chinese company SNPTC using the technologies of the American Westinghouse based on the AP1000 and CAP140 reactors. The launch of the first power unit was planned to be carried out already in 2023, but there is no real progress in the construction of the station.

So, we need to understand whether Russia is worth taking on these projects.

Why is it dangerous

Seriously though, it is not clear where all this enthusiasm about the "gifts of the Sultan" came from. There are too many possible "pitfalls" in cooperation with Turkey right on the shore.

At firstIf the BOO (Build-Own-Operate) business model is applied in Sinop and Inglead, then instead of one Akkuyu we will get three projects at once with dubious prospects for recoupment. There is no reason to believe that Rosatom will bargain for better conditions for itself this time.

Secondly, long-term cooperation with Ankara is extremely unreliable from a political point of view. Turkey crossed the road of Russia in Syria, Libya, Nagorno-Karabakh, now in Turkmenistan and Central Asia, in general. In our country, it is rather naive to believe that nuclear power plants allegedly tightly tie the Turks to Rosatom in terms of fuel supplies and services. Say, there will be 3 nuclear power plants, which means the dependence will be three times higher. Alas, this is not the case. Nothing can prevent Ankara in the event of aggravation of relations with Moscow from nationalizing these strategic energy infrastructure facilities. There will be no special problems with TVEL supplies either: Westinghouse has already trained at Ukrainian nuclear power plants and adapted its nuclear fuel for Russian-designed reactors. In other words, we could lose something like $ 66 billion at once (22 times 3). The question is, who will actually hold whom for the "causal" place: are we Turks, or are they us?

ThirdlyLet's think about the long-term implications of changing contractors for new nuclear projects. In this case, we will be interested in the nuclear power plant in Ingleada, which China intended to build. Let's remember how terribly offended the French were when a multibillion-dollar contract for the construction of submarines was taken from under their noses. In Paris, this was taken almost as a national insult. I wonder how Beijing will react if their contract is taken away by Moscow? Yes, in theory, what difference does it make to us, we have capitalism, nothing personal, just business. Or not? The Kremlin seems to be set on friendly relations with the PRC, but what if the Chinese are offended and then remember? Or come what may, but money does not smell? Well, let ...

FourthlyBy creating a specific infrastructure and training Turkish specialists, we inevitably contribute to the development of Ankara's nuclear program, which in the future may receive a military direction. President Erdogan has already spoken directly about the need for Turkey to acquire nuclear weapons.

The bottom line is that cooperation with Turkey in the field of nuclear energy is a very controversial idea, which may subsequently turn out to be Russia sideways. Deepening it and scaling it up by building 2 more new nuclear power plants seems to be an extremely bad idea. If it also turns out that these projects are the result of an exchange for de-escalation in Idlib in favor of Turkey, then this is just some kind of madness. Note that after the announcement of the "gifts of the Sultan" information about the preparatory strikes of the RF Aerospace Forces against the positions of the pro-Turkish militants in the north of the SAR has sharply decreased. I would like to make a mistake, but one gets the impression that instead of reducing economic By contrast, the Kremlin is happy to deepen its dependence on Ankara.
Ctrl Enter
Noticed oshЫbku Highlight text and press. Ctrl + Enter
We are
What is behind the explosions at arms depots in the Czech Republic
"We must beat first": the geopolitical alignment around Russia is continuously deteriorating
Reporterin Yandex News
Read Reporterin Google News
Ad
We are open to cooperation with authors in the news and analytical departments. A prerequisite is the ability to quickly analyze the text and check the facts, to write concisely and interestingly on political and economic topics. We offer flexible working hours and regular payments. Please send your responses with examples of work to [email protected]
24 comments
Information
Dear reader, to leave comments on the publication, you must sign in.