El Niño and the Polar Vortex: Some Western countries risk not making it through the coming winter 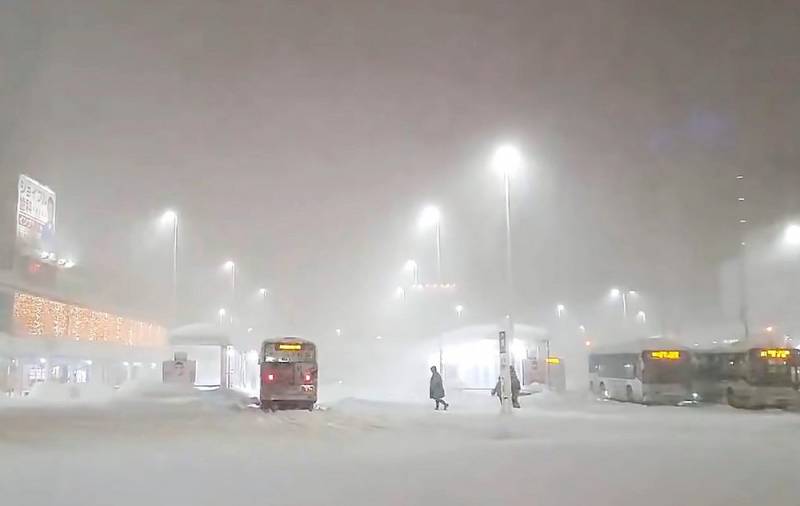 Apparently, our world is on the verge of another colossal test. Humanity did not have time, as they say, to "take a breath" after the coronavirus pandemic (which, in fact, is not yet over at all), but a new threat is already approaching it. Forecasts are louder and louder that the energy crisis unfolding before our eyes is just a prelude to the truly global nightmare that the population of most countries of the planet may face this year. The "tension" with energy resources, experienced by the warm autumn and the manifold increase in their shortage, which came in a frosty winter - these are, as they say in one southern city, "two big differences."


It would seem that the main "post-like" lesson that the inhabitants of the Earth should have learned by heart is precisely that "in fateful moments" only unity can save them. At the very least, the ability to put aside squabbles, strife, old scores and new grievances, at least for a while, in order to direct all efforts towards a joint solution of truly global problems. Nevertheless, in the context of an increasingly alarming situation in the energy market, in which our country could play a very serious, if not even a key role, some countries are unable to renounce Russophobia even under the threat of total blackouts and general freezing. As the saying goes: incredible, but true.

Not the end of the world yet, but something similar

Literally the other day, considered a fairly serious business media, not inclined to empty "vangovanie", Bloomberg erupted with a forecast, from which, pardon the "black" pun, the frost is on the skin. Based on data from the Atmospheric G2 weather forecast service, the US Climate Prediction Center (CPC) and other similar and no less serious specialized organizations, journalists predict the world not just frosty and snowy, but, indeed, a fierce winter, which, alas, will survive in the current energy realities. , not everyone has a chance. According to forecasters published by Bloomberg, two natural phenomena, El Niño and the Polar Vortex, can play a fatal role in this case. Both of them are not at all out of the ordinary anomalies and are well known to everyone who deals with weather forecasts.

In the first case, we are talking about temperature fluctuations periodically occurring in the surface water layers of the Pacific Ocean (in its equatorial part). In the second case, we mean simply a huge area of ​​low pressure at the North Pole, which serves as a kind of "barrier" that prevents colossal masses of Arctic cold air from breaking out into the vastness of the rest of the world. This year, it looks like things are going badly on both counts. The arrival of El Niño (observed 8 times over the past seven decades) is expected with a probability of about 70%. The result will be cold snap in parts of Asia and North America, possibly droughts in South America and parts of China. Perhaps something else that is just as "inspiring" and "useful" for economics... It is not yet possible to predict this with XNUMX% accuracy, but forecasters recommend preparing for trouble.

With the Polar Vortex, everything is much clearer - this barrier will weaken, and icy air masses will rush from the Arctic throughout the Northern Hemisphere of our planet. And then someone is as lucky. Last February, it was because of such a breakthrough in the American Texas that the power system "lay down", and a couple of hundred people froze to death. Let me repeat myself - all this is not a disaster of an apocalyptic scale, and humanity has encountered it more than once and not twice. However, it is this winter that a sharp cold snap risks becoming the very “last straw” under which the back of the energy sector and the economy of some countries can easily be broken. Energy tariffs are already sky-high - as of this writing on the London ICE Futures stock exchange, November blue fuel futures were already trading at $ 1700 per thousand cubic meters. All other fuels are trying to keep up, demonstrating the ability to break all price records imaginable.

Again, the matter is aggravated to the extreme by the consequences of attempts to sharply and decisively steer the whole world on a "green course" - today many countries are on the verge of blackouts caused by the desire to exclude coal from electricity generation - from prim Britons to super-pragmatic Chinese. "Decarbonization" is a good thing - but, as it turned out, only in warm weather and a good supply of coal and fuel oil "just in case." This very case (aka "rainy day") has already come quite clearly. The next step is the arrival of the polar fox and polar cold into the world. Against the background of such a prospect, calls for further abandonment of "harmful fuels" in general, and of Russian hydrocarbons, in particular, continue to sound like madness. And yet...

Russophobia is stronger than the instinct of self-preservation

The British Prime Minister, the inimitable Boris Johnson, instead of enlightening the respectable British in the extremely burning question: whether to expect rolling power outages already literally tomorrow, or is it nevertheless closer to December, cheerfully reports to them that “the country is completely will switch to receiving electricity exclusively from renewable sources ”no later than 2035. In the government entrusted to him, they calculated everything - it should work out. Johnson said the exceptional achievement in this case would be that the UK "for the first time will not depend on imported energy." Do not depend on you as much as you like, gentlemen! Rumor has it that you have plenty of antique furniture on your island - hold out on chairs from Buckingham Palace for a while.

In the meantime, due to the high price of gas, fertilizer plants are shutting down in the country, which, in turn, paralyzes the work of slaughterhouses (they need carbon dioxide) and puts the British on the brink of a food crisis - in addition to the already raging fuel crisis. By the way, they won't be able to become vegetarians either. Due to the rise in price of the same "blue fuel" greenhouses in the Netherlands are about to stop working. From there, a volume of food is supplied to world markets, the second in value among all exporters. First of all, these are vegetables and fruits grown in colossal greenhouse farms with a total area of ​​10 thousand hectares. But the problem is that they need 3 billion cubic meters of gas per year for their functioning. At current prices for it, Dutch products risk becoming "gold" and it would be more profitable to shut down their production. As the saying goes, "and you know - there will still be: there will be cold, but there will be hunger" ...

Meanwhile, against the background of such a News"Finnish parliament members cheerfully tweet that" ridding their country of imports of Russian energy resources "is just around the corner. Some 15-20 years and it will be possible to "make a handle" to "Gazprom" - everything will be replaced by renewable clean energy. At the same time, the "sovereign men" in all seriousness argue that "dependence on fuel supplies from Russia" is, of course, very bad. But if you think about it, "Moscow is also very dependent on energy exports!"

If the Russians tried to put pressure on Helsinki or threaten even once in forty years, their whole business would definitely end!
- one of the parliamentarians, Matti Vanhanen, exclaims pompously.

By the way, the former prime minister of the country. I love such boast in the style: “We would give them so! If only they caught up with us! " As usual, Poland is setting completely schizophrenic records in the “fight against Russian domination in European energy markets”. There (how many times is this already ?!) proclaimed a "complete rejection of Gazprom's supplies." By 2023, if I'm not mistaken. How are they going to plug the "hole" of 12 billion cubic meters of "blue fuel", which immediately forms in the energy balance of Warsaw? Well, of course with LNG! The Poles intend to receive this through the appropriate terminal in Lithuania. The terminal, however, is not yet there - but they promise to complete it. Perhaps even next year. What the cost of this gas will be, taking into account the current trends, and how it will look in comparison with today's prices for fuel received in accordance with fixed long-term contracts, dreamed of gentlemen do not care. As, by the way, the fact that all LNG can once again float to Asia - both past Lithuania and Poland, which in this case will be left to bask in Russophobia and stupid plans.

At the same time, the funniest thing in this matter is that, in the end, both Poles and Lithuanians see themselves as exporters, and not future partners! The GIPL interconnector, which is supposed to connect the gas transportation systems of the two countries, each intends to use exclusively in its own interests. Lithuanians are raving about the moment when they get rich thanks to the Klaipeda LNG terminal. Poles dream of how Norwegian gas from the Baltic Pipe will be pumped to Europe through Lithuania. In such cases, when the parties so desperately "pull the blanket over themselves," usually nothing good happens at all. However, wait and see.

If the forecasts from the experts quoted by Bloomberg come true, this winter we will witness the triumph of Darwin's theory. In any case, that part of it that talks about natural selection. How will it look like? It's very simple. In Germany, as far as is known, they are already ready to speed up the certification of Nord Stream 2 and its commissioning. In any case, the head of the press service of the local Federal Network Agency Fite Wulf just the day before yesterday voiced just such a position. Common sense, nevertheless inherent in German bureaucrats, triumphs, which significantly increases the chances of their compatriots to spend the cold weather in warmth and comfort. At the same time, the Prime Minister of Ukraine Denis Shmygal proudly stated that "Kiev is in no way interested in direct supplies of Russian gas" and negotiations with Moscow on this matter are not even planned. They are going to survive in "nezalezhnoy" "at the expense of their own gas production", which sounds like an anecdote. There is time to make the right choice between Russophobia and survival. The question is who is ready for this and who is not.
Ctrl Enter
Noticed oshЫbku Highlight text and press. Ctrl + Enter
We are
Peace enforcement operation. Russia inflicts a preemptive strike on Kiev
Three years left: Ukraine will be sold in parts
Reporterin Yandex News
Read Reporterin Google News
Ad
We are open to cooperation with authors in the news and analytical departments. A prerequisite is the ability to quickly analyze the text and check the facts, to write concisely and interestingly on political and economic topics. We offer flexible working hours and regular payments. Please send your responses with examples of work to [email protected]
12 comments
Information
Dear reader, to leave comments on the publication, you must sign in.