Russians with humor assessed the "Naval forces" of the Taliban 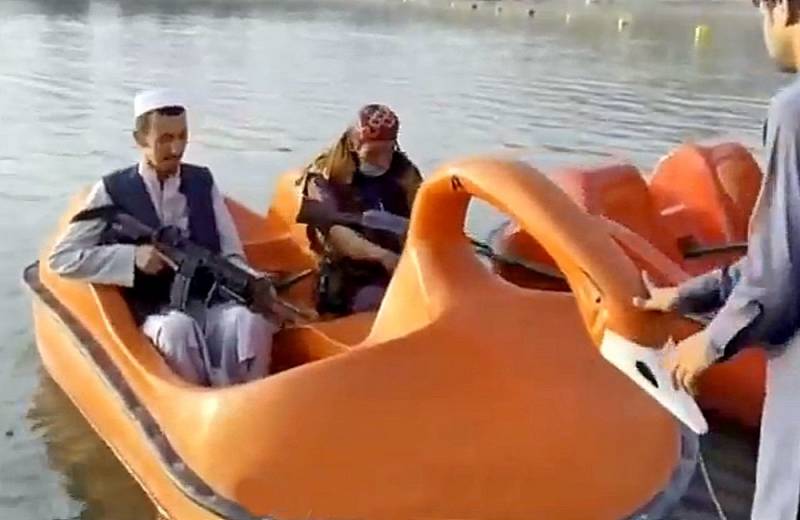 A video showing the "Naval Forces" of the Taliban appeared on social networks. The video posted by Realnaya Voina Telegram shows Taliban militants (a terrorist organization banned in Russia) riding on swans on the lake.


Armed fighters get into boats and glide in them along the surface of the lake, apparently getting a lot of pleasure from this.

Soon it will be cramped for them here too - naval battles for spheres of influence will begin. The battle promises to be huge!
- suggests Maxim Nezlobin.

Are these "warships" included in the list of $ 85 billion worth of weapons left behind by the Americans while fleeing?
- Alexey Komnik is interested.

Afghans are deprived of a normal childhood, so they are trying to catch up
- explains Vitaly Romanov.

Some kind of ideological borrowing from the Ukrainians can be traced
- said Alexander Samarin.

The Taliban have been fighting for 40 years. They have tremendous combat experience. Yes, not enough equipment and knowledge, but there is motivated vitality and perseverance. Laughing at your opponent is the last thing. The enemy must be respected and taken seriously. Otherwise, they will laugh at the end and already at us
- Alexander Baev pulled back his colleagues.

Earlier in late September, it was reported about a similar "voyage" of jihadists. Then they rode on "swans" on the surface of the lake in the Afghan national park Bandi-Amir, located in the central part of the country in the Hindu Kush mountains at an altitude of 3 thousand meters above sea level.

According to eyewitnesses, after the seizure of Kabul on August 15, the Islamists also could not resist and indulged in entertainment - they jumped on a trampoline and rode a carousel and cars in an amusement park in the Afghan capital.
Ctrl Enter
Noticed oshЫbku Highlight text and press. Ctrl + Enter
We are
“With Russians it’s worth playing fair or not playing at all”
Where is Russia going?
Reporterin Yandex News
Read Reporterin Google News
Ad
We are open to cooperation with authors in the news and analytical departments. A prerequisite is the ability to quickly analyze the text and check the facts, to write concisely and interestingly on political and economic topics. We offer flexible working hours and regular payments. Please send your responses with examples of work to [email protected]
2 comments
Information
Dear reader, to leave comments on the publication, you must sign in.