August 13 2018
4
Few exist today for those that cause such a public outcry as GMOs. The thing is the lack of reliable information with a huge number of myths and conjectures around genetically modified organisms. So what is GMO, and with what do they eat? And why are GMOs banned in our country, but allowed in states that are considered more developed than Russia? 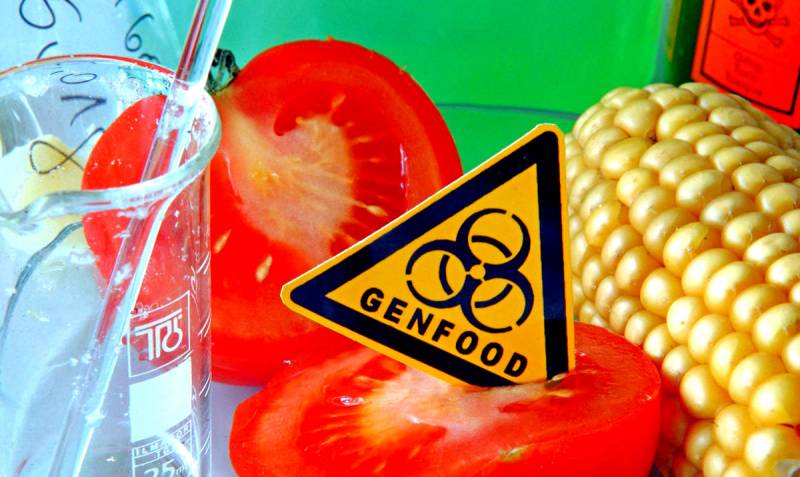 GMOs are living organisms modified by introducing a foreign gene, as well as those that have acquired new properties when editing their genome. Genomodified products can be divided into 3 groups:

1) Containing genetically modified ingredients, such as soy or corn. It is known that 90% of soy on the planet is GMO.

3) GM vegetables and fruits that we eat by buying them in a store or in the market.

GMOs cause polar estimates. It is known for certain that in medicine, with the help of GMO bacteria, millions of lives have already been saved thanks to the production of insulin for patients with diabetes mellitus. But in the field of agriculture, everything is not so clear. The use of GMO crops is beneficial to large agricultural holdings, since the cost of production decreases by 20%. However, the negative consequences of growing transgenic plants in the form of the appearance of superweeds resistant to chemicals, as well as an extremely dangerous decrease in the number of bees in the regions of GMO cultivation, were noted. The situation is exacerbated by the apparent unwillingness of the developers of GMOs to publish full data on the possible negative consequences of their cultivation with reference to trade secrets.

In Russia, more than two years ago, a moratorium on the cultivation of transgenic plants was introduced. The import of transgenic seeds and breeding of transgenic animals is also prohibited. However, experimentation with GMOs in experimental plots and research are allowed. Despite this, we eat GMO products every day in bread, confectionery and meat products, which are added to the derivatives of genetically modified soybeans, corn and rice. In Russia, the famous Monsanto sells its product under the Bayer brand. But this is far from the only company, Syngenta, Pioneer Hi-Bred and BASF are traded in the same way, and they do it all legally. Also, GM products are consumed not only by the Russians themselves, but also by livestock. In our country, three hundred commodity names of GM livestock feeds are officially registered. Even small calves are sometimes fed GM soy milk.

In Russia, domestic laboratories operate in which GM crops for gardens are developed that are resistant to pests, chemicals and viruses, with extended shelf life. Technologies for their development "kindly provided" by American corporations. Russian scientists, often with financial support from abroad, are developing transgenic tobacco, rapeseed, potatoes, and sunflower. Corresponding Member of the Russian Academy of Sciences Vladimir Kuznetsov believes that the development of competitive biotechnologies in our country is one of the priorities of the scientific and technological development of Russia:


To achieve this goal, it is necessary to significantly increase state funding for basic research on the creation of market-friendly transgenic organisms that are safe for humans and the environment.

However, such activities should take place exclusively under state control and with the involvement of the public. The organization “Russia without GMOs” appealed to the head of state with a request to make the decision-making process informational and transparent, create a special body controlling the use of GMOs and introduce a complete register of GMO food and animal feed.

Experts note that Western corporations are extremely dissatisfied with the moratorium introduced two years ago on the cultivation of GMO products in Russia. Big business always does not focus on the health of consumers, not the possible environmental damage, but only its profit, measured in billions of dollars. Should Russia once again open up its market for Western GMOs under pressure from lobbyists? No, of course. There is enormous potential in the field of genetic modifications, but the risks are great. First, many years of independent research must be completed, which together will evaluate all environmental, medical and economic aspects of this problem.
Ctrl Enter
Noticed oshЫbku Highlight text and press. Ctrl + Enter
We are
Why does the government want to divide Russia into 14 parts?
Harvest death: what threatens Russia with this?
Reporterin Yandex News
Read Reporterin Google News
Ad
We are open to cooperation with authors in the news and analytical departments. A prerequisite is the ability to quickly analyze the text and check the facts, to write concisely and interestingly on political and economic topics. We offer flexible working hours and regular payments. Please send your responses with examples of work to [email protected]
4 comments
Information
Dear reader, to leave comments on the publication, you must sign in.