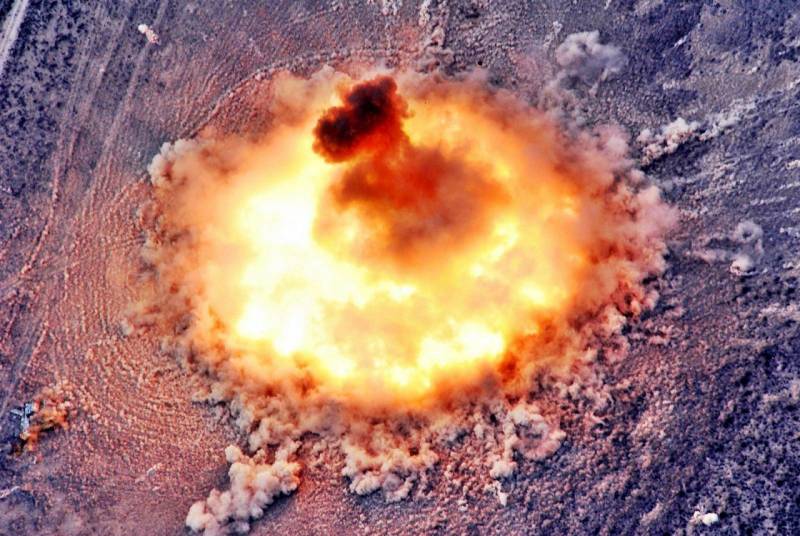 Many have heard of a vacuum or thermobaric bomb. This weapon is rightfully considered the most powerful after the nuclear one. However, it also has its advantages and disadvantages.


It is worth starting with the principle of the "mother" of all bombs. Like everything ingenious, it is extremely simple.

The first ammunition of this type consisted of 50-liter high-pressure cylinders with a braking parachute, which opened at a height of 30 meters. At a distance of 5 meters near the surface of the earth, the squib destroyed the shell of the cylinder, releasing its contents under pressure.

Finally, the resulting "cloud" was ignited by a small charge. A mixture of acetylene oxide with aluminum or magnesium powder was used as an explosive.

The main advantage of vacuum bombs is their amazing penetrating power. It is impossible to hide from her in a trench or wait outside the wall of a building.

The aerosol cloud floats into any crevices and shelters. This ammunition is an ideal weapon against enemy personnel hiding in defensive fortifications.

In addition, due to the fact that the aerosol mixture penetrates into the soil, thermobaric ammunition can be used to clear large areas.

As for the disadvantages, such a weapon is ineffective against armored vehicles and is practically useless in the air. And the time of detonation on the ground must be calculated very accurately. In the case of a delay, an explosive cloud can simply be blown away by the wind, and in a hurry, the mixture will not be saturated with oxygen enough, which will reduce the power of the explosion.

Finally, it is worth noting that the most powerful vacuum bomb, which was named "The Pope of All Bombs", belongs to Russia. Tests in 2007 showed that one such munition is capable of completely destroying well-fortified structures within a radius of 300 meters, while objects such as ordinary residential buildings collapsed at a distance of 1 km from the epicenter of the explosion.

Moreover, our engineers have adapted thermobaric ammunition for MLRS. This is how the TOS-1A "Solntsepek" system was born, which Western experts call "Putin's most terrible weapon."

Ctrl Enter
Noticed oshЫbku Highlight text and press. Ctrl + Enter
We are
Russia is armed with the best loitering ammunition
Why is our CBT "Tosochka" so nervous for Americans
Reporterin Yandex News
Read Reporterin Google News
Ad
We are open to cooperation with authors in the news and analytical departments. A prerequisite is the ability to quickly analyze the text and check the facts, to write concisely and interestingly on political and economic topics. We offer flexible working hours and regular payments. Please send your responses with examples of work to [email protected]
11 comments
Information
Dear reader, to leave comments on the publication, you must sign in.