US and China want to end Russian Arctic

August 6 2018
1
Our country historically considers the Arctic to be its sphere of influence. However, things could change soon. The United States and China have openly challenged Russia's traditional “Arctic rule”. What is this connected with and what can lead to? 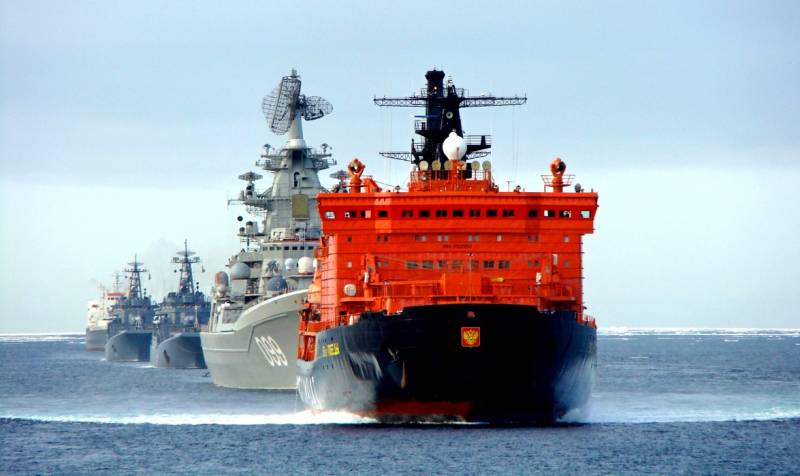 There are plenty of reasons for interest in gaining control of the High North.

At firstThe shortest route between the Russian Federation and the United States of America runs through the Arctic. In the days of the USSR, it was the North that was the territory of the Cold War itself in all senses of the word. After the collapse of the Soviet Union, the Arctic was largely demilitarized, but gradually everything is back to square one.

Secondly, thanks to the gradual melting of the ice cover, great prospects are opening up along the Northern Sea Route, which is the shortest waterway between Europe and Asia. Freight through the NSR is growing every year, thanks to its advantages over the Suez Canal due to lower transportation costs. However, to ensure reliable northern transit, a serious icebreaking fleet is needed, which so far only Russia has.

Thirdly, The Arctic is still an untouched pantry of natural resources: oil and gas, gold and silver, copper and diamonds, titanium and other rare elements.

Almost a hundred years ago, the Arctic was divided between the five countries that have claims to it due to its geographical location - the USA, USSR, Canada, Denmark and Norway. Due to the colossal length of the coastline, the USSR received the largest piece of the North, and the Russian Federation inherited it. According to the Convention on the Law of the Sea, with the exception of 12 miles of territorial waters, the adjacent 200 nautical miles are free shipping areas, but Russia controls natural resources. However, these resources prevent Washington and Beijing from sleeping peacefully.

The US Navy included in the training program the development of skills in the Far North. The US Coast Guard is insisting on its presence on the Northern Sea Route, ostensibly to assist distressed ships. However, the Coast Guard has only 2 icebreakers, and only 1 belongs to the heavy class, and it is already forty years old. For comparison, the Russian icebreaking fleet has over 40 units. The United States expects the adoption of a new program to build 6 modern icebreakers. The cost of each will exceed $ 900 million. The first of the series will be launched already in 2023. Washington is ready to make the necessary efforts to take control of the short sea route "from the Varangians to the Americans."

But do not sleep in the Middle Kingdom. The squinted eyes of Asian partners look with great interest at the colossal reserves of the resources they need so much. More than 400 gas fields have been discovered in the Arctic alone. And how many are still not discovered? Despite the absence of its borders there, Beijing embarked on the implementation of Arctic projects, making it clear about its global ambitions. Experts comment on Chinese initiatives this way:

They consider themselves to be a state close to the Arctic and interested in it, and they want none of the coastal states to block their access to the Arctic. They want to become something like an equal partner. Now they are studying their economic opportunities to be guaranteed a seat at the negotiating table on the future use of the Arctic

In addition to the extraction of natural resources, China became interested in the development of the NSR, turning it into the Northern Silk Road. The route “from the Varangians to the Chinese” is more reliable and much shorter than the alternative of transit through the Suez Canal, which, moreover, may be blocked for them under certain circumstances. To ensure safe shipping, China itself began to build its own icebreaking fleet. Next year, an icebreaker with the speaking name Xuelong 2 - "Snow Dragon" will be launched in Shanghai. The range of its course will be 14 nautical miles, ice up to one and a half meters thick will obey him.

All these preparations should not be ignored by Moscow.
Ctrl Enter
Noticed oshЫbku Highlight text and press. Ctrl + Enter
We are
Can Russia “stop” the Suez Canal?
Why the West "pounced" on the Northern Sea Route
Reporterin Yandex News
Read Reporterin Google News
1 comment
Information
Dear reader, to leave comments on the publication, you must sign in.