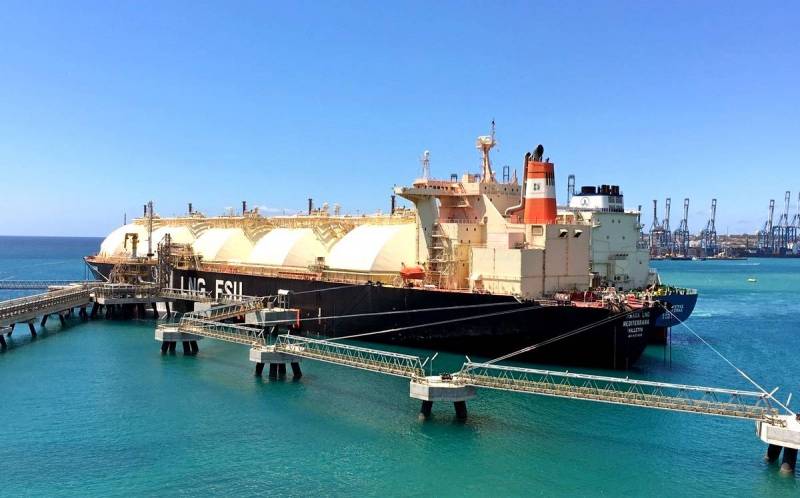 The Americans have stopped trying to prevent the completion of the Nord Stream 2 pipeline and are reducing the rate of production of their own LNG against the backdrop of the failure of the gas strategy in Europe. At the same time, Kiev still hopes that LNG from the United States will replace the usual gas from Russia on the European market. Dmitry Marunich, co-chairman of the Energy Strategies Fund (Kiev), told about this in an interview on the channel "Pershy Kozatsky".

The global agenda is changing. If the hypothesis that detente is close is true, detente is possible, the level of tension between Moscow and Washington may decrease, and we will see confirmation of this hypothesis (probably at the meeting of Mr Zelensky with Biden), then you yourself understand where the wheel of history is heading. This wheel will gradually crush Vladimir Alexandrovich and the company, which has taken a very cunning position of "do nothing"
He explained.

Marunich clarified that this is about the problem of the process of resolving the conflict in Donbass, into which the Ukrainian authorities decided to mix "Nord Stream-2". At the same time, he is far from thinking that the United States and Germany are really linking Nord Stream 2 with the Normandy format and the Minsk agreements. The expert drew attention to the fact that although the United States resigned itself to the completion of Nord Stream 2, the previously imposed sanctions were not lifted.

This is also a tricky approach. They (USA - ed.) Will shit a little bit
- he is sure.

The expert added that the destruction of relations with Berlin is unacceptable for Washington. Therefore, Americans listen to the wishes of the Germans. At the same time, he stated that for some reason LNG from the United States did not capture the European gas market against the background of a serious shortage of energy raw materials in the EU and an extremely low level of filling of European UGS facilities.

But where is this liquefied gas? Gas for $ 450. Why aren't US LNG caravans sailing here? Where is this help, where is support? Why hasn't the American liquefied gas won back its share of the European market?
- the expert asks.

Marunich suggested that the lack of US LNG in Europe is due to several factors. Low prices do not allow producing LNG in the required quantities and increasing exports. In addition, prices are higher in the Asian market than in the European one. Therefore, the Americans redirected their LNG to Asia.

Enough chattering. Let Ukrainian deputies and political scientists engage in political science and work in the Verkhovna Rada. And now another person comes and says that America wants to supply liquefied gas and off we go. Well, where is it, liquefied gas? Now is the perfect time for American LPG to take over the European market. Why didn't he take it? Answer a simple question. Therefore, the counterproductive chatter should be stopped, the Americans also understood this.
He summed up.


Note that according to the Energy Information Administration (EIA) of the United States, this year the Americans will slow down the rate of commissioning of new LNG production facilities compared to the previous year, and this trend will continue. In 2021, the total capacity of LNG terminals in the United States will increase by 16,5 million tons per year, or about 19,2 billion cubic meters per year - one stage has begun operation and two more stages are expected to be commissioned at three terminals.