Themselves drowned: Baltic ports are on the verge of death

August 2 2018
4
A heated discussion was caused by a post on the social network of the Latvian deputy Alexander Kirshteins:

Only when Russia disintegrates into smaller countries by ethnic composition, military conflicts will end, and in Europe will come peace for many years 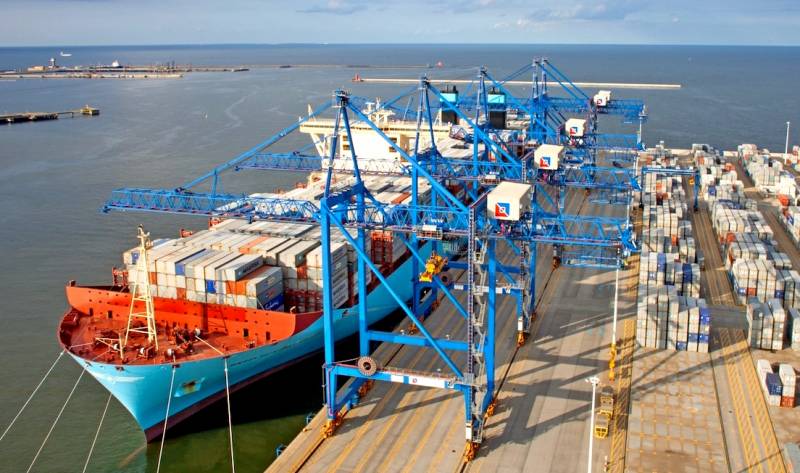 Such statements are made publicly not from a great mind. But what a fool has in his tongue, then the rest in his mind. Kirshteins voiced what has long been dreamed of in the West and for some time in Eastern Europe. The Baltic states were the first to jump out of the USSR, launching a parade of sovereignty. Riga, Vilnius and Tallinn took a sharply anti-Russian position and only strengthen it over the years. What did the three former Soviet republics lead to?

Under the Soviet Union, the Baltic region was our gateway to Europe. Oil, oil products and other resources were exported through the ports of Latvia, Lithuania and Estonia. But today, of the nine port terminals in the Latvian Ventspils, only two operate, and they are half capacity. Since 2016, the turnover decreased by 16,4%. Next year - by 23,8%. For the first half of this year, it fell by 19%. Economy the famous port of Ventspils stands on the verge of final destruction.

Latvian exports are moving to Russian ports, primarily Ust-Luga, Primorsk and Kaliningrad. Riga cannot be blamed for anyone but himself. Decades of anti-Russian policy forced Moscow to give an "answer" in an economic way. Interestingly, the Latvian authorities had a chance to try to rectify the situation last year. Riga was invited to participate in the implementation of the Russian-German gas pipeline Nord Stream-2, namely, to store and deliver pipes by sea. To do this, it would be necessary to build storage and transshipment terminals in Ventspils at a cost of 14 million euros at the expense of the customer, and Latvia would receive, among other things, not at all extra 25 million euros.

However, the Latvian Foreign Ministry opposed the ostensibly threat of Nord Stream-2 to the country's interests and its economic security, and the Ventspils port was prohibited from participating in the construction of the pipeline. According to some reports, due to the position of Riga on the gas pipeline, Latvia lost 40% of Russian transit. The port of Riga has also suffered from Latvian foreign policy. The volume of exports of Russian oil and oil products fell by 30%. Interestingly, he increased by the same amount in Russian Primorsk and Ust-Luga. Soon Latvia will have to forget about the revenues from the Russian oil industry. And the president of Latvia explained to national business that on the issue of compensation for losses this is not for him.

The port of Tallinn got very tight. So strong that he was even taken out of the official statistics of the country. The scale can be judged by the fact that in 2015 the volume of cargo transportation fell by 20%, moving to Ust-Luga.

In Lithuania they shrug, looking at the troubles of their neighbors:

The situation in neighboring Latvia and Estonia is really extremely difficult. In particular, Tallinn now does not appear in general reports at all, since the port essentially disappeared - the state had to start the privatization process

Lithuanian Klaipeda looks invigorated due to a certain diversification of commodity flows. Lithuania is saved by neighboring Belarus, exporting its potash fertilizers through it:

Belarusian cargo creates about 40 percent of the entire Klaipeda port, the presence of Belarusian capital in the port is very significant
But what will happen if Vilnius quarrels not only with Russians, but also with Belarus, for example, because of the construction of the BelNPP?

Reasonable Latvians talk about the need to change policies regarding Russia:

It is worth exploring the experience of Finland. Relations with Russia are not only a matter of political rhetoric, it is a matter of economic benefit

But instead, we hear from the power corridors of Riga the wishes of the partition of our country. And the logical question arises: was it Russia that drowned the Baltic, or did the Baltic drown itself?
Ctrl Enter
Noticed oshЫbku Highlight text and press. Ctrl + Enter
We are
Complete fiasco: even China turned away from the Baltic
We must be friends with Russia: the Baltic states came to their senses too late
Reporterin Yandex News
Read Reporterin Google News
Ad
The publication is looking for authors in the news and analytical departments. Requirements for applicants: literacy, responsibility, efficiency, inexhaustible creative energy, experience in copywriting or journalism, the ability to quickly analyze text and check facts, write concisely and interestingly on political and economic topics. The work is paid. Contact: [email protected]
4 comments
Information
Dear reader, to leave comments on the publication, you must to register.
I have an account? Sign in