Russia may be blamed for flooding in Germany 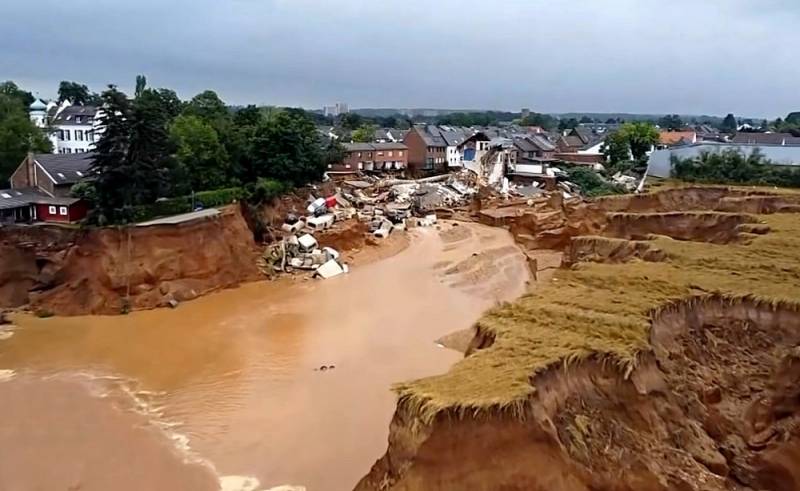 A series of natural disasters that hit the South of Russia earlier did not bypass North America and Europe. Terrible forest fires are raging on the territory of the United States and Canada, and severe floods have occurred in Germany and neighboring Poland, leading to numerous destruction and loss of life. Who is to blame and what to do? Western policy and the media persistently repeat about global warming, which means that those who make the greatest contribution to it are to blame. However, not everyone agrees with this formulation of the question.


Currently, forests are burning not only in our Yakutia, but also across the ocean, in Canada and the United States. More than 13 thousand American firefighters are involved in extinguishing fires in 20 states. A misfortune of the opposite kind hit Europe, where floods occurred due to heavy downpours. The German rivers Ahr and Moselle overflowed their banks and flooded several cities and towns. More than 200 thousand people found themselves in a state of siege without light and drinking water. Neither telephones, nor the Internet, cellular communications work - only intermittently. More than 160 people were declared dead, and more than 1300 are still missing. The German authorities call the incident the worst tragedy since the end of World War II and promise financial assistance to the victims. The floods also affected the southern regions of Poland's neighbors, Austria, Czech Republic, Netherlands, Switzerland, Belgium.

With all our sympathy for the grief of the Europeans, one fact remains unclear: why the rich and prosperous EU was prepared for a natural disaster much worse than “bastard” Russia. Where is the famous German Ordnung? As it turned out, the FRG authorities knew in advance that a flood could occur, but did nothing to prevent a catastrophe. And who will be to blame now? Chancellor Angela Merkel's cabinet will resign with her? Eh, no. Not so fast.

Currently, the leading liberal media, owned by "globalists", have developed a seething activity, promoting the thesis that it is global warming that is to blame for everything, and not something else. And this fits perfectly into the current geopolitical agenda. Europe promotes its green course towards maximum decarbonization economicsand the United States followed suit. It's simple: Brussels and Washington intend to establish and dictate to everyone the "green" rules of the game by introducing the so-called "carbon tax" for importers. This means that higher duties will be imposed on products that have a high "carbon footprint" in their production. First of all, this will affect the producers of steel, aluminum, cement, fertilizers, pipes, electricity, etc. Our country is expected to be among the main victims, since the share of "green energy" in our energy balance is scanty. And rightly so, Western politicians and domestic pro-Western liberals will say. Moreover, it is possible to throw from above for the damage caused by Russia to the civilized USA and Europe.

What kind of damage? Look: almost immediately after the floods in Germany, it became known that the US President's Special Envoy for Climate, John Kerry, tried to persuade President Putin to stop using coal-fired power plants in our country. The case was presented as if it was the Russians who were primarily responsible for global warming, which had already led to wildfires in North America and floods in Europe. The fact that the share of coal-fired generation in the United States itself is higher than in Russia does not bother anyone, as well as the fact that coal-fired thermal power plants still emit in Germany, Poland and even France, where the largest share of nuclear energy in the total energy balance. But this is so, nonsense. The main thing is to appoint the main culprits: Russia and, of course, China. For both of these countries, the West may issue an increased "climatic" bill.

It should be noted that not everyone in Europe shares the idea of ​​"ecological radicalism". For example, Waldemar Gerdt, a member of the Bundestag from the Alternative for Germany party, quite rightly points out that the flooding in the FRG is to blame for the local authorities, who were warned in advance of the possibility of a flood, and their negligence in their duties:

There is no climate change here, these are normal cyclical changes that have always been on Earth. This is simply irresponsibility, negligence, carelessness of those authorities who were supposed to monitor the condition of these dams and other devices. So, as always, nothing personal, politics is politics, and business is business. And here, unfortunately, innocent people suffered, who lost their lives, property, and faith in their country and their government.
These are reasonable words, but this position is very far from the political mainstream, when it is easier and more convenient to blame the responsibility for large-scale destruction and mass death of people on some abstract reason and, moreover, on Russia.
Ctrl Enter
Noticed oshЫbku Highlight text and press. Ctrl + Enter
We are
"We must beat first": the geopolitical alignment around Russia is continuously deteriorating
Ten "defeats" of Putin
Reporterin Yandex News
Read Reporterin Google News
16 comments
Information
Dear reader, to leave comments on the publication, you must sign in.