"Checkmate": Will the light fighter be more successful than its "big brother" Su-57 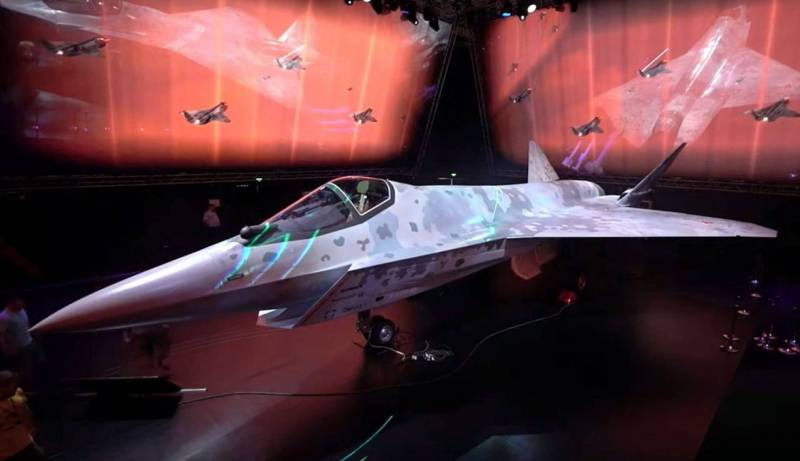 Today in the Moscow region opens the international aerospace show, the 15th in a row since its foundation. At it, Russia will present several promising new products: civil liners MS-21 and Il-114-300, Mi-171A3, Ka-32A11M and Ansat-M helicopters, Su-57E, MiG-35, MiG-29 and Su-35 fighters, anti-aircraft missile systems SAM "Tor-E2", "Antey-4000" and S-350 "Vityaz", as well as other types of weapons and equipment... But the most anticipated event is undoubtedly the final discharge of the veil of secrecy over the newest domestic single-engine fighter, which should make everyone checkmate.


Here we should pay tribute to the PR specialists of Rostec, who managed to create an intrigue out of the blue and attract increased interest of the widest audience to the new product. The advertising campaign was played out like clockwork: first, a video appeared giving bold hints of who the manufacturer intends to sell the fighter to, then a series of "leaks" of photographs took place, where everyone could see the plane from different angles, hidden by a black cover hiding the most important elements of its design ... One thing was clear from the start - it was a single-engine fighter, which meant a breakthrough in the military aircraft industry of Russia, but there were still doubts whether it was a pure horizontal plane or a long-promised vertical take-off and landing aircraft. Apparently, the "vertical" will still have to wait, but I really want this business not to be postponed indefinitely. The possibilities of using VTOL aircraft in the Russian Navy are much wider than it is commonly believed, about which we are in detail told earlier. However, back to the "stripped" plane. Why did the developer call it a "fundamentally new" aircraft?

Let's put together everything that is currently known about the light multi-role fighter, which will officially be presented today at MAKS-2021. It seems that it has one AL-41F1 engine, therefore, dividing its thrust-to-weight ratio by two, we get an aircraft with a take-off weight in the region of 18 tons. It is also clear from its design that this fighter was created using stealth technologies. Apparently, this project is a further development of the fifth generation fighter program.

Despite the fact that work on the Su-57 began back in 2001, as of 2021, the serial production of the aircraft has not begun. This was due to both the overall complexity of the technical problem posed and the banal unavailability of a promising engine planned for installation on an aircraft ("Product 30"). Therefore, the first Su-57s so far fly with the weaker AL-41F1, which produces about 14,5 tons of thrust instead of the required 16-17 tons. Since the Su-57 is still not supplied for the own needs of the Russian Aerospace Forces, even the Indians, who highly respect Russian weapons, have abandoned its export version of the Su57E. For now, anyway. But can they be blamed for this?

In this context, the creation of a light version of the fifth generation fighter seems to be a very correct step:

At first, the entire appearance of the novelty literally screams that the aircraft is maximally unified with its older brother. And this is a big plus for him, since the mass production of units and assemblies tested on the Su-57 greatly simplifies the design and reduces the cost of a light fighter. Component unification is a great thing also in a real war, when some parts can be twisted and rearranged from a damaged aircraft to one that can still be quickly repaired.

Secondly, single-engine fighters are banally more in demand due to their relative cheapness compared to twin-engine ones. Each such aircraft costs its customer much less money both when purchasing and during subsequent operation. At the same time, a fighter with a single power plant is still able to perform its main function - "extermination" of enemy aircraft. Yes, he will give way to a heavy fighter, but it all depends on the buyer's requests and where and against whom he intends to use these aircraft. India, the United Arab Emirates, Vietnam and Argentina are symbolically shown as potential buyers in the Rostec commercial. These countries are clearly not going to fight against the United States and NATO as a whole. A light multi-role fighter, created with the use of stealth technologies, will be quite enough for them to ensure the security of their air borders. Practice shows that the line of Russian Su-30 fighters and their modifications is in great demand abroad, but the heavy Su-57 has not yet entered. However, India can still show real interest in the Su-57E when it is installed and tested in the Product 30 case.

Thirdly, the presence of a light multipurpose fighter in the Russian Aerospace Forces along with the heavy Su-57, designed to fight for air supremacy, will make their capabilities more balanced. Not all work only for export, right? It is possible that a carrier-based fighter will be created on its basis in the future, if the Ministry of Defense of the Russian Federation deems it appropriate to build a program for building domestic aircraft carriers.

With all the positive from this news it should be borne in mind that the Russian novelty will enter a market already densely occupied by several serious competitors. This is the United States with its F-16, and Sweden with the Gripen fighter, and the joint Sino-Pakistani JF-17 Thunder (Chengdu FC-1 Xiaolong). To give them not only check, but also checkmate, the Russian aircraft will have to try very hard.
Ctrl Enter
Noticed oshЫbku Highlight text and press. Ctrl + Enter
We are
"Bride" Su-57E: India returns to the issue of buying a Russian fighter
The newest anti-aircraft missile system "Antey-4000" announced in Russia
Reporterin Yandex News
Read Reporterin Google News
113 comments
Information
Dear reader, to leave comments on the publication, you must sign in.