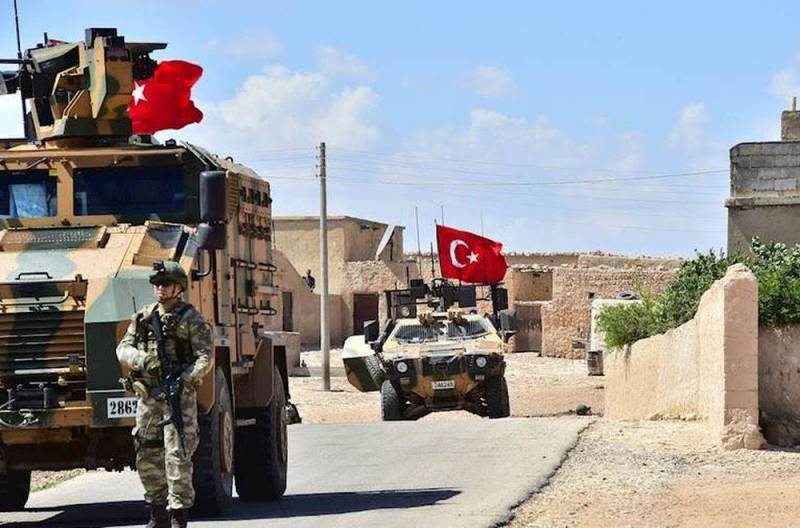 The United States and its allies withdrew their troops from Afghanistan ahead of schedule, leaving the puppet Kabul government to deal with the radical Islamist Taliban group (banned in the Russian Federation) on their own. However, this is not entirely true. Turkey is the only NATO member state that has left its military in the Afghan capital. But what is the "Sultan" counting on when Kabul is surrounded and besieged by the Taliban? Why does he himself expose his military to inevitable defeat from the militants and a humiliating flight with the last plane? How should all this be understood? Perhaps, on the contrary, it was the cunning Turkish president who outplayed everyone again?


Let's take another close look at the situation in Afghanistan. Yes, the Taliban are successfully moving forward, occupying the settlements left by foreign invaders and the government army. According to the radical Islamists themselves, they already control about 85% of the country's territory. Local security officials either defect, crossing the border of neighboring states, or surrender to the mercy of the victors. The fall of Kabul appears to be inevitable. But is it really so? The formal number of Taliban militants is estimated at 70 thousand people, but in reality, according to some sources, about 40 thousand are actively involved. This is enough to defeat the weakly motivated Kabul army in a specific theater of operations, but these forces will not be enough for subsequent control over the captured / liberated regions. To call a spade a spade, the success of the Taliban is mainly due to the fact that the diverse communities of Afghanistan simply do not offer them any resistance, accepting them as a local alternative to foreign invaders and collaborators. That is to say, wait and see. Where there is real resistance to the militants, they do not do so brilliantly. In some areas, the government army was even able to stop the offensive and regain control over some counties. Yes, on the whole, the prospects for official Kabul look extremely deplorable, and it certainly cannot resist on its own.

Unless a third force intervenes in the game. And she has already emerged. This is Turkey, which is in no hurry to withdraw its troops guarding the airport in the capital of Afghanistan. But what is the "Sultan" counting on? What game is Ankara trying to play?

Let's remember the trick that President Erdogan did in Libya quite recently. The army of Field Marshal Haftar was already at Tripoli, and everyone was counting the days when the Government of National Accord would fall. But it did not fall because Turkey intervened. Ankara entered into an agreement with Tripoli on military-technical cooperation and sent its fleet and army, as well as Syrian militants there. Backed from the rear by a professional Turkish army equipped with heavy weapons and aircraft, the alien bearded men were able to quickly drive away the local bearded men from the Libyan capital. In return, PNS Faiza Saraja signed a memorandum with Ankara on the delimitation of the continental shelf rich in hydrocarbons in the Eastern Mediterranean in favor of the savior of Turkey.

Now we are returning to Afghanistan. This country has long been of great interest to many external players because of its convenient strategic position, as well as a large amount of natural resources: copper, gold, oil, gas, uranium, lithium and other minerals. Also, the TAPI gas pipeline from Turkmenistan to Pakistan and India should pass through its territory. From point of view economics and geopolitics Afghanistan is a pretty interesting place. And what can the "sultan" do this time?

Well, for example, he can conclude an agreement on military-technical cooperation with Kabul, which for the latter is a straw in front of a drowning man. One can imagine how enslaving the terms of the concessions will be, which will have to be signed by the Afghan authorities as gratitude for the salvation. Further, Turkey can transfer its military to Kabul, a heavy machinery, fighters and attack UAVs. The main hostilities, as in Libya, will also be conducted by militants from Syria. It makes no sense for the "sultan" to liberate all of Afghanistan, it is enough to show the Taliban the impossibility of taking Kabul by force, which means that they can gain full power in the country and legalize themselves in the international arena. That is, the Turks will only need to hold the capital and its environs, as was the case in Libya. As soon as the Taliban are convinced of the seriousness of Ankara's intentions and the impossibility of winning by military force, they can sit down at the negotiating table and reach some kind of agreement on the delimitation of spheres of influence, possibly on the creation of a transitional government with the participation of both sides under the supervision of Turkey.

The second option assumes that Turkey will not be able to keep Kabul, and the military will still have to evacuate it. The question is what will happen next with the Afghan authorities? The war is over, thank you all? No, not so fast. Well, would a cunning "sultan" let such an opportunity out of his hands? With a high degree of probability, it can be assumed that from the fallen Kabul, the official government will be evacuated to Turkey, where it will become the Afghan government in exile. And don't underestimate this geopolitical tool.

Let's say the Taliban took control of the entire country, established their own order and then began to expand the ideas of radical Islamism further, to neighboring Pakistan, China, Iran, and our Central Asia. And then Turkey, hosting the officially recognized UN government of Afghanistan in exile, objectively becomes the new center of the anti-Taliban coalition. Ankara will receive the full moral right to call all the former Soviet Central Asian republics for military-technical cooperation, updating the idea of ​​creating a united Turkic-speaking army "Great Turan". It is possible that Turkish military bases may appear in Uzbekistan and even in Pakistan, with which Turkey has recently developed the warmest relations.

If you look at it like that, then Ankara wins in any case, and "Sultan" Erdogan has the right to be considered one of the most effective geopoliticians of our time.
Ctrl Enter
Noticed oshЫbku Highlight text and press. Ctrl + Enter
We are
Who actually won the Cold War and what the future holds for the world
Ten "defeats" of Putin
Reporterin Yandex News
Read Reporterin Google News
Ad
We are open to cooperation with authors in the news and analytical departments. A prerequisite is the ability to quickly analyze the text and check the facts, to write concisely and interestingly on political and economic topics. We offer flexible working hours and regular payments. Please send your responses with examples of work to [email protected]
19 comments
Information
Dear reader, to leave comments on the publication, you must sign in.