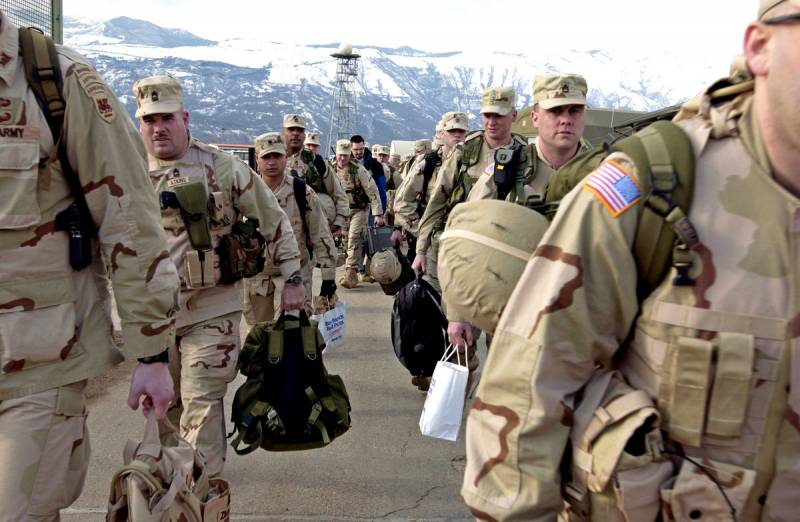 The swift withdrawal of American troops from Afghanistan and the equally swift offensive of the militants of the Taliban group banned in Russia, as expected, marked a new stage in the "Great Game" for the redistribution of spheres of influence in Central and South Asia. It is clear that the United States intends to create a powerful hotbed of tension in this key region for Russia, China and Iran. And so Moscow made an offer to Washington, with which Washington would not be able to agree.


According to the statements of the Taliban leadership, this radical Islamist group currently controls about 85% of the country's territory. In the capital of Qatar at the same time, negotiations are being held between the Taliban and representatives of the puppet pro-American government of Afghanistan, left to fend for themselves by their curators. It is already clear that no one is able to prevent the capture of Kabul by the militants, except for Turkey, which is trying to play its own political the game. After that, a new geopolitical reality will set in, in which a country of considerable size, rich in natural resources and considered one of the world's largest drug production centers, will be under the full control of an armed group of radical Islamist persuasion. The Taliban leadership naturally faces the question of legalizing its own regime and recognizing it in the eyes of the international community, which is what the current negotiations in Qatar are aimed at with the official government in Kabul, which is living out its last weeks or even days. The creation of some kind of transitional government with the participation of the Taliban can become a form of legitimization of this structure in the future.

It is clear that this new reality is very frightening for all the neighbors of Afghanistan, which risks turning into a center of concentration, and then the spread of radical Islamic ideas. Considering that there are no really closed state borders there, armed militants will be able to penetrate Tajikistan, Uzbekistan, Turkmenistan and further into Kyrgyzstan and Kazakhstan, closer and closer to Russia, without much difficulty. No less dangerous for China is the possibility of the Taliban's expansion into Pakistan and their support for Muslim separatists in the Xinjiang Uygur Autonomous Region. This is the kind of mess the United States made, first invading Afghanistan in 2001, and 20 years later leaving without achieving the stated goals. Foreign Minister Sergei Lavrov expressed concern about the further development of the situation:

In the light of the hasty withdrawal of the US and NATO contingents, the uncertainty of the development of the military-political situation in this country and around it has sharply increased ... It is obvious that in the current conditions there are real risks of an overflow of instability to neighboring states.
What's next? And then the fun begins. The American military intends to retreat from Afghanistan, but not somewhere to Alaska, but to remain nearby, on the territory of the former Soviet republics. Washington sent a proposal on this to the leadership of Tajikistan, Uzbekistan and Kazakhstan. But that's not all. In addition to the US military bases in Dushanbe, Tashkent and Nur-Sultan, it is proposed to deploy Afghan collaborators who have collaborated with the invaders for two decades on their territory. Initially, it was about ten thousand refugees, but now this figure may rise to one hundred thousand. For some reason, Washington does not want to thank its accomplices by issuing a green card to them in the United States.
Such ideas naturally caused a sharp rejection in the Kremlin. Russian Deputy Foreign Minister Sergei Ryabkov commented on them as follows:

Let me emphasize that the redeployment of US troops to neighboring countries with Afghanistan is unacceptable. We told the Americans directly that this would change a lot, not only in our perception of what is happening in this important region, but also in our relationship with the United States.
Recall that earlier the US military had already used the infrastructure in Uzbekistan and Kyrgyzstan as logistics centers to support their operations in Afghanistan. And this despite the fact that Kyrgyzstan is a member of the CSTO, and according to the Uzbek Constitution, the deployment of foreign military bases on the territory of the country is prohibited. Then Moscow turned a blind eye to all this, since it provided the United States with support in the fight against extremists after the terrorist attacks of September 11, 2001. But a lot of water has flowed under the bridge since then, and the relations between our countries are no longer the same. The Americans had to leave their homes in Central Asia not of their own free will, but only under pressure from Moscow on Bishkek and Tashkent.

Equally alarming is Washington's idea of ​​dropping hundreds of thousands of Afghan refugees from among American collaborators to the CIS territory. It is completely incomprehensible where, how and at whose expense to equip them there, how long it can last. (Presumably, indefinitely). It is also unclear whether there are recruiters of extremist groups among them, but it is clear that tens of thousands of Afghan refugees, completely loyal and dependent on the mercy of the United States, will become an instrument of American foreign policy in Central Asia. So far, no enthusiasm has been heard from Tashkent, Dushanbe and Nur-Sultan about this, and it is not surprising. And now comes the fun part. According to the publication that appeared on the website Kommersant information, the Kremlin has officially offered Washington to use the military infrastructure in Tajikistan and Kyrgyzstan to the Pentagon, but not the former American, but the existing Russian. The Ministry of Defense of the Russian Federation was ready to cooperate with colleagues from the United States on the issue of exchanging intelligence data, but they have not given any intelligible answer to this day.

To be honest, all this resembles the story of the 2007 sample from the Gabala radar station. Then the United States actively promoted the idea of ​​creating a European missile defense system, ostensibly to defend against Iran. And it was a no brainer that in fact the purpose of this anti-missile system was to weaken Russia's nuclear potential. But President Putin approached Washington with a proposal to jointly use the radar station leased from Azerbaijan, if the Americans are so afraid of Iranian medium-range missiles. Naturally, this story did not end well: the United States nevertheless built elements of the Aegis missile defense system in Romania and Poland, and Baku dramatically raised the rental price for Moscow. Ultimately, Russia refused to extend the treaty, removed all the equipment near Voronezh and handed over the facility to Azerbaijani "brothers", and dual-use launchers appeared in Eastern Europe, where anti-aircraft missiles can literally be replaced with Tomahawk cruise missiles equipped with nuclear combat units capable of flying to the Urals.

So why has Moscow extended a helping hand to Washington again? Probably, this is done to "clear the conscience", they say, we offered you ourselves. Hopefully, certain conclusions have been drawn from the history of 2007, and after this political gesture, Russia will begin the process of actively returning to Central Asia, occupying a strategically important military infrastructure for the needs of the RF Ministry of Defense. If we do not do this first, the Americans or, worse, the Turks will come there, who will soon have to retreat somewhere from Kabul.
Ctrl Enter
Noticed oshЫbku Highlight text and press. Ctrl + Enter
We are
"We must beat first": the geopolitical alignment around Russia is continuously deteriorating
Ten "defeats" of Putin
Reporterin Yandex News
Read Reporterin Google News
Ad
We are open to cooperation with authors in the news and analytical departments. A prerequisite is the ability to quickly analyze the text and check the facts, to write concisely and interestingly on political and economic topics. We offer flexible working hours and regular payments. Please send your responses with examples of work to [email protected]
10 comments
Information
Dear reader, to leave comments on the publication, you must sign in.