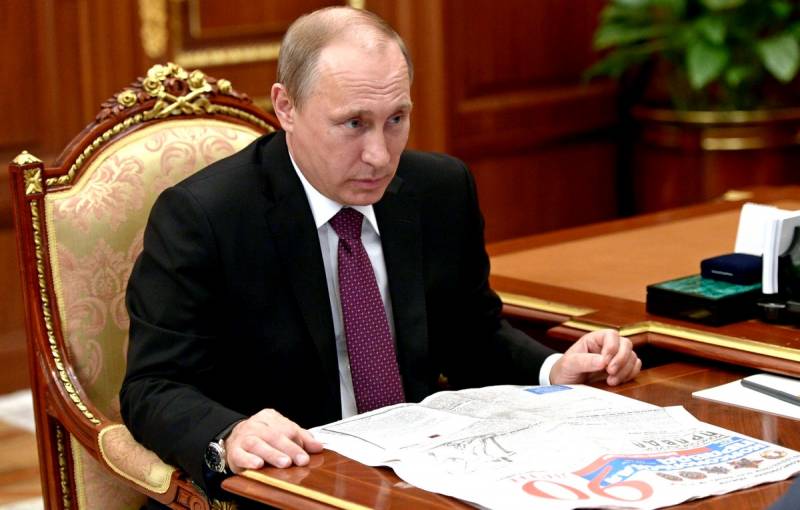 A few days ago, an article was published on the Kremlin's website by President Vladimir Putin, in which an attempt was made to comprehend the results of 7 years of confrontation between Russia and Ukraine after the coup d'etat in Kiev in 2014. This article, at first glance, slender and logical, clearly written with some assistance from historians and professional speechwriters, left behind a slightly strange impression.


The publication was devoted to the general history of the Russian, Ukrainian and Belarusian peoples and all its vicissitudes. It is written in two languages ​​at once, in Russian and in mov. Acquaintance with it will be useful to representatives of the modern generation, which, instead of textbooks, prefers to sit on their phones, especially from Ukraine, because there, in a simple and understandable language, concisely, but succinctly, the key historical events of our countries over the past thousand years are presented without any "ancient ukrov" and the "Sumerians". Someone from the liberal opposition even saw in Putin's article as a basis for new territorial claims to Independence, but is that so?

The key problem is that the Kremlin, apparently, has not made any correct conclusions. Once again, the Bolsheviks are declared to be guilty of everything, who, according to Vladimir Vladimirovich, had already "planted an atomic bomb under the Soviet Union":

The Bolsheviks treated the Russian people as an inexhaustible material for social experiments. They dreamed of a world revolution, which, in their opinion, would abolish nation-states altogether. Therefore, borders were arbitrarily cut, and generous territorial "gifts" were handed out. Ultimately, what exactly were the leaders of the Bolsheviks guided by, cutting the country, no longer matters. You can argue about the details, about the background and logic of certain decisions. One thing is clear: Russia was actually robbed.
And again in the article the thesis was voiced about the "delayed-action mine" laid by the Bolsheviks under the USSR. At the same time, for some reason, its author forgets that, before collapsing the Soviet Union, the Bolshevik party created it by defeating the “whites” and the foreign invaders invited by them in the Civil War, who jointly stole most of the gold reserves of the Russian Empire. By the way, the tsar was not overthrown by the Bolsheviks, about which not everyone is aware today, idealizing the figure of the citizen Nikolai Romanov. But the Bolsheviks, for example, noted the humiliating class division of society, introduced universal free education and medicine, made social elevators available to the common people. For some ten years, they carried out a large-scale industrialization, defeated the most powerful army in the world, the Wehrmacht, in a terrible bloody war, and just fifteen years later they were the first to send a man into space. And, yes, they tried to bring enlightenment and culture to the peoples of the wild outskirts, for which they are now so hated by their ungrateful descendants. At the same time, the article notes that the national republics did not fall away precisely because of the "leading role of the CPSU."

It is simply surprising why, against the backdrop of all this, President Putin considers the Bolsheviks to blame for the collapse of the USSR, who provided the republics with the right to exit in the Constitution. But let's remember the early years of the Russian Federation, where the Basic Law did not have the right to exit at all, but President Boris Yeltsin gave the go-ahead to the regional leaders “to take as much sovereignty as they liked,” and they began to take. Look, they even wanted to create their own republic in the Urals, they printed the currency - "the Ural franc"! Frank, Karl! And, despite the lack of the right to withdraw, the Chechen separatists proclaimed the Republic of Ichkeria, which ultimately led to two wars. Is it also the Bolsheviks to blame? Or is it not about constitutional norms that give the theoretical right to exit, but about those people in whose hands real power is concentrated, in their decisions and actions?

Let's go further. The article states that today Ukraine is torn off from Russia, moreover, it has proclaimed it at the legislative level as an "aggressor" country. And, of course, the hostile intrigues of the West are to blame for this. President Putin himself convincingly shows how this previously happened and is happening now in a historical context. But what's next? A 250-strong army has been created in Ukraine, which is being trained by NATO military instructors. Kiev buys Bayraktar attack UAVs, Turkish-made corvettes, has agreed on military-technical cooperation with Great Britain, and is itself developing powerful Neptune anti-ship missiles, which can pose a real threat to the Russian Black Sea Fleet. Nothing can prevent Ukraine from lifting the constitutional restriction on the deployment of foreign troops and military bases on its territory. In the foreseeable future, elements of the American Aegis missile defense system with dual-use launchers may be located somewhere near Kharkov or Zaporozhye. Then cruise missiles capable of carrying nuclear warheads will target the infrastructure of the RF Ministry of Defense all the way to the Urals, which poses a real threat to the very existence of our country. And what do we see? In his article, Vladimir Vladimirovich exclaims:

Do you want to create your own state? You are welcome! But on what terms? ... In other words, leave with what you came with. It is difficult to argue with such logic. I will only add that the Bolsheviks, as I have already noted, began to arbitrarily redraw the borders even before the creation of the Union, and all manipulations with the territories were carried out voluntarily, ignoring the opinion of the people.
And another kick to the "dead lion" who can no longer answer. Instead of eliminating the existential threat from the Independent, we have been calmly watching for the seventh year as a hostile state under the external control of the West is gaining strength. Here someone may see hints of a certain division of Ukraine, but is this so?

The problem is that Nezalezhnaya itself will not fall apart, and will not freeze in winter, and certainly will not crawl back to confess. It can only be destroyed by force with the help of active external influence: it can be a unilateral intervention followed by the occupation of all or part of its territory, or even a division together with European neighbors, to which the western regions can retreat - with Hungary, Poland, Slovakia and Romania. But no one will bring us this on a silver platter, as it could have been in 2014. For such an outcome will have to pay dearly, in blood and money in the form of new tough economic sanctions. Alas, there are no simple solutions left. And what do we see:

I repeat, for many in Ukraine the "anti-Russia" project is simply unacceptable. And there are millions of such people. But they are not allowed to raise their heads. They have practically been deprived of the legal opportunity to defend their point of view. They are intimidated, driven underground. For their convictions, for the spoken word, for the open expression of their position, they are not only persecuted, but also killed. Murderers tend to go unpunished.

At the end of the article follows a passage that only the Ukrainians themselves decide what their country will be like. You know, there was a strong impression that the Kremlin is waiting for a new Bogdan Khmelnitsky to appear, who will lead Ukraine back to Russia. But, alas, under the conditions of the neo-Nazi regime in Kiev with the SBU, its informants, extremists of the "Right Sector" banned in the Russian Federation, this is simply impossible. Russia itself will have to solve the problem of Independent. But this conclusion was not found in the article.
Ctrl Enter
Noticed oshЫbku Highlight text and press. Ctrl + Enter
We are
"We must beat first": the geopolitical alignment around Russia is continuously deteriorating
Russians have no habit of losing wars: What does the Munich agreement teach
Reporterin Yandex News
Read Reporterin Google News
29 comments
Information
Dear reader, to leave comments on the publication, you must sign in.