Rainbow flag offensive: Russia is at the forefront of the defense against LGBT people 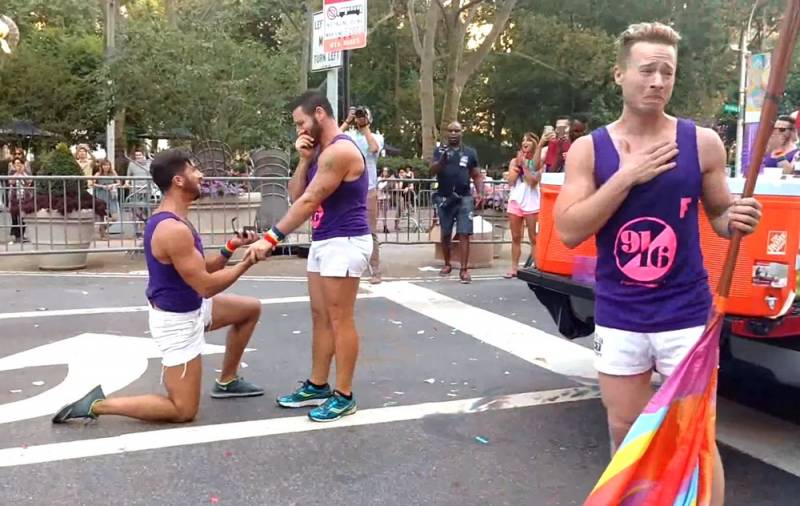 The decision of the European Court of Human Rights, which in the most categorical form demanded that Russia must legalize “same-sex unions” that are categorically unacceptable within the framework of the traditional values ​​of our country, is by no means unexpected. As, however, the sharply negative reaction to this, let's be frank, extremely impudent and initially provocative claim, immediately followed by representatives of the domestic authorities at various levels. In this regard, a completely natural question arises - why was all this done and is being done?


To more or less understand the reasons for what is happening, one should first of all remember that the ECHR's demarche with respect to Russia is only part of a much broader campaign, which is just now being carried out within the framework of the European Union, and not only of it. It is clear that the ongoing talk about "protecting human rights", "universal values" and the like should not be taken into account in any case. In this game there are completely different bets and completely different goals.

The fact is that the European Court of Human Rights, which has a residence in Strasbourg, “suddenly” began to “bake” decisions in favor of “gay people” with the same skill that a good pastry chef makes hot cakes. There is a feeling that some monstrous conveyor has been included in the legislation of various countries with regard to their legalization. But who launched it and why? A few days after the adoption of the “fateful” decision in favor of the domestic “blue” ones, the ECHR delivered exactly the same verdict in the case based on the complaint of their “colleagues” from Italy.

Those, too, you know, were "infringed on their rights" and when trying to legitimize them in any way, excuse the expression, "relationship" instead of "advice and love" they said completely different words. No wonder - Italy is one of the few countries of the Old World where Christianity, the traditions and moral foundations based on it, have retained more or less firm positions. After all, the Holy See of the head of the Catholic Church is located in the heart of this country, even though the Vatican is de jure a separate state from it. That is why various “non-traditionalists” are not welcome there at all, and, in addition, according to Italian law, exactly as in ours, the family can be considered exclusively the union of a man and a woman, and not just anyone with anyone (or anything). To this, the hookers from Strasbourg objected that Rome is maliciously violating such “mossy” and “discriminatory” legal norms by nothing more than the Convention on Human Rights, a fundamental document for the Council of Europe, the judicial body of which, in fact, is the ECHR. Rather, specifically Article 8 of this very Convention. But this is just the real cheating and rigging!

The aforementioned document, really important, comprehensive and very thorough, was adopted in 1950. That is, in those days when no one had even heard of the "tolerance" that the brain had endured to the whole West, but all sorts of ... but to hell with tolerance! All sorts of perverts sat, as they should, quieter than water, below the grass and could not even think of any recognition of their own "dislocations" as the norm, and even more so about their aggressive propaganda. In the very same Article 8 of the Convention, referring to which, the ECHR made its decision clearly states that "state interference in family and private life is unacceptable." However, there are also reservations - this principle can be violated "in the interests of national and public security", "to protect health and morality", as well as "in order to protect the rights and freedoms of others."

It is from this point that those notorious double standards of modern Western society come into play, guided by which it has already sunk to the devil knows what. Strasbourg believes that the spread of “rosy” views in it does not threaten the national security and security of society. Well, you will, gentlemen, Europeans, but why are you then forced to drag recruits into your armies almost by force? Is it because your youth run to gay pride parades much more willingly than to defend their homeland? Well, as for "morality and health" - here, in my opinion, there is nothing to discuss. One hundred percent reason to put a reliable barrier on the path of the "rainbow" to legalization and recognition of them as "normal". As for the last point, how do you order to be with the rights and freedoms of those millions of Russians (or Italians) for whom perverted "love" is categorically unacceptable and disgusting? How about their right to shield their own children from her intrusive propaganda?

Is the “Eurogean Union” becoming a reality?

The most remarkable thing is that a little earlier, making a similar decision regarding Russia and accusing it of violating the same Article 8 of the Convention, the ECHR declared in its verdict that the rejection of the perverted "LGBT values" by the absolute majority of the citizens of our country can in no way serve the basis for the "infringement" of those who profess them. Like, "the minority is not obliged to obey the majority!" Excuse me, but this is exactly what you demand from us! And not only from us alone. At present, in particular, the governing bodies of the European Union are launching a campaign of persecution and persecution against Hungary. The authorities of this country found the courage to pass a law similar to the Russian one - on the categorical prohibition of the propaganda of various "rainbow" deviations among children and adolescents. And what?

The European Commission is already preparing a number of measures to "punish" Budapest, and the head of this body, Ursula von der Leyen, who called the Hungarian normative act aimed at protecting children "a shame", openly says that if it is not abolished, the country will be awaited " serious sanctions ”. Is this not a desire to subjugate the recalcitrant "minority" that remains in sound mind and firm memory and is trying to defend traditional values ​​to the will of the aggressive and vicious "majority" that has long been "gone from the reels" and is trying to forcibly "convert" everyone and everyone? At the same time, supporters of "rainbow" values ​​try to act not by washing, but by rolling, using not only open coercion, blackmail and threats, but also cunning. Both from Russia and from Italy, lawyers from the ECHR demand to legitimize, if not "same-sex marriages", then at least "unions" of perverts - "by finding a different form within the framework of the country's legislation, taking into account the social and cultural context."

Well, truly, "what an owl about a stump, what we will stump over an owl!" Before us is a kind of insinuating and seemingly soft attempt to force the defenders of traditional values ​​to retreat not even one step, but half a step, giving up, as it were, the very little of their own principles. Well, what does it cost you, right? Nobody demands to marry "little blue" or whatever else according to all the rules in the registry office or, forgive me, Lord, to marry in the church. If you don’t want it, you don’t need to. You just "equate them in rights" with normal people - and that's enough. Enough for now ... Fortunately, each of our compatriots knows the saying: "the claw is stuck - the whole bird is gone", as well as a children's fairy tale about a chanterelle with a rolling pin. Let these "chanterelles" of incomprehensible orientation spend the night in the hallway - at once you will be left without a roof over your head! It is worth making the slightest concession - and, you see, soon normal people will turn out to be a "minority". But no one will defend their rights - neither in Strasbourg, nor in Brussels.

Europe today is free to do whatever it wants, going crazy as it pleases. No one is surprised anymore news like the refusal of one of the world's largest airlines Lufthansa from the address "ladies and gentlemen", because it can mortally offend these very ... well, you know who. Or the introduction in the British government with great fanfare of the all-important post of “Special Representative for the Rights of the LGBT Community”. By the way, a real member of the House of Lords, a real sir, has been appointed to her. Sir gay, yeah ... Gentlemen, the British, Germans, Dutch and others can fool around as much as they like. If you want to degenerate, die out, yielding your land to the representatives of peoples, your crazy "values" do not share - your choice. Just don't try to drag everyone else along the same path to the underworld!

It should be mentioned that the recent decisions of the ECHR, adopted as if by a blueprint, have one very nasty feature. The point here is that this body works according to the Anglo-Saxon legal principle - precedent. If anyone does not know, let me explain - this means that each of his verdicts, adopted on one or another important issue, becomes, as it were, a template for resolving all similar cases. But the jurisdiction of the ECHR de jure includes all countries that are active members of the Council of Europe, and not only those that are members of the EU. That is, both our country and, for example, Ukraine, Armenia, Azerbaijan. And Turkey, by the way, too. If in Lithuania, which is struggling to comply with European "standards and values", the ECHR decision on the compulsory recognition of "same-sex unions" was categorically rejected (the speaker of the local Seimas Loreta Grauzhinene stated that the Lithuanian society has not yet " ripe ”), then what will happen in Hungary, Poland, or Orthodox Greece, which is very patriarchal in terms of morality? There is nothing to say about Muslim Turkey ... Judicial decisions aimed at forcing them to accept the unacceptable may turn out to be a "time bomb" laid under the very idea of ​​a "united Europe", and a terrible destructive force.

It's no secret that the sharply intensified offensive under the "rainbow flags" is coordinated, first of all, by those globalist forces that have gained the upper hand in the United States, and not only there, but practically everywhere in the West. The goal here is to create a kind of faceless mass out of all mankind, perhaps not gray, but iridescent in all possible colors. Crowds of biological organisms without faith, without morality, without a homeland, without a family, and ultimately without gender. Such a crowd, which, by and large, whether it is no longer people, but simply “creatures”, will certainly be much easier to manage than individuals who have some beliefs and values. Russia today stands at the forefront of confronting these terrible plans and will stand. The only place in it where the "rainbow" flag can fly is the facade of the US Embassy. This is where he belongs.
Ctrl Enter
Noticed oshЫbku Highlight text and press. Ctrl + Enter
We are
What is behind the explosions at arms depots in the Czech Republic
Ten "defeats" of Putin
Reporterin Yandex News
Read Reporterin Google News
16 comments
Information
Dear reader, to leave comments on the publication, you must sign in.