Revolution in Cuba will be a dangerous geopolitical defeat for Russia 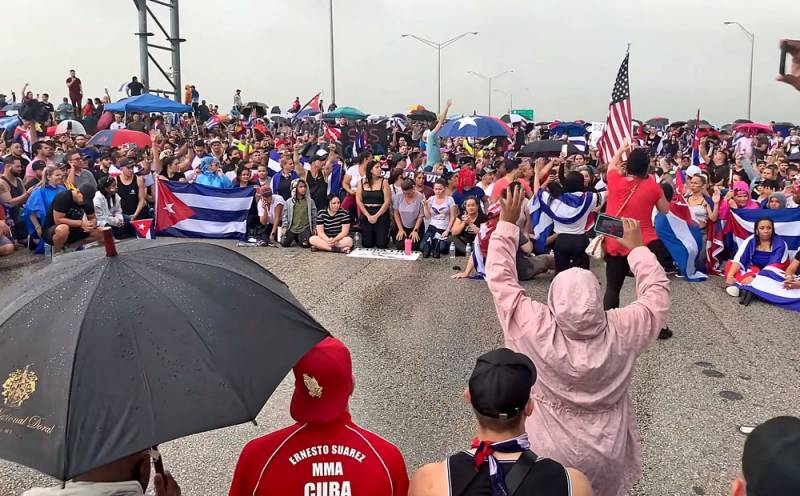 The protest demonstrations that swept the Island of Liberty over the weekend received the widest coverage both in the world and in the domestic media. No wonder - for the West, the “fall of the communist regime” in this small country, which does not want to submit to the unprecedented pressure exerted on it, is, one might say, a cherished dream. For Russia, such a prospect would be an extremely unpleasant and dangerous geopolitical defeat, which could more than significantly weaken the position of our country throughout Latin America.


As usual in such cases, the opinions of the commentators of what was happening were initially divided to the exact opposite. Western media portrayed the Cuban events as a story of a "spontaneous explosion of popular anger" that was "inevitable due to power failures" and the "wrong ideology" that reigns on the island to this day. Those who try to maintain at least a minimum of objectivity, if they do not speak directly about foreign interference, then at least do not deny its possibility in this case. So what is in front of us - "the uprising of the Cubans against the communist tyranny" or an attempt by the United States to arrange a classic "color revolution" according to a typical scenario?

It is, of course, fundamentally wrong to assert that the Cubans did not have any reasons for dissatisfaction with life, and could not be. Things on the island really are far from the best, and recently the situation has worsened significantly. The point here is not least of all that the blow received from the coronavirus pandemic and so far from the blooming local the economy, is felt much stronger in Cuba than in most other countries. The reason is that tourism is the backbone of the national prosperity of Liberty Island, which has been gripped for 60 years in the grip of the most severe sanctions initiated by the United States. It is he who traditionally provides a country in which, according to available estimates, up to 80% of the goods consumed by the population have to be imported from abroad, the inflow of foreign currency necessary for export purchases. Well, what kind of tourists during the global quarantine period?

It is quite natural that the country has recently experienced a noticeable shortage of consumer goods and even food. An accident at one of the largest local power plants added fuel to the fire, leaving a number of settlements without electricity during the hellish heat. But as for the "problems with the coronavirus" and the accusations against the government of inability to cope with the situation, then everything is much more complicated. In order to understand what the essence is, it is high time for us to move from considering the really objective difficulties that Cuba is facing today, to those subjective reasons that these very difficulties have. It will be quite easy to name them due to the fact that they have a very specific and well-known source.

Cuban President Miguel Diaz-Canel blamed the United States for everything from the start. At the same time, he not only called those who took to the streets "counter-revolutionary mercenaries who sold themselves to the American empire", but also pointed out directly that the economic troubles, the presence of which he did not even think to deny, were provoked primarily by that "policies suppression ", which the United States is carrying out against the state it heads and which has noticeably intensified lately. According to Diaz-Canel, the 1994% drop in the Cuban economy in 2020, unprecedented since the 11 crisis, was primarily caused by US sanctions, and secondly, by the coronavirus pandemic.

As for, in fact, the fight against the disease, then external factors also play a role. The situation with COVID-19 in the country cannot be called "catastrophic" or "critical". The speculation fanned by some media about the "outbreak of an infection that has gotten out of control" is untrue. A little more than one and a half thousand people died from the coronavirus on the island, which is a very low figure in comparison with other Latin American countries (about 190 thousand people died in Peru, 112 thousand in Colombia, and 33 thousand in Chile). Moreover, it was Cuban doctors and pharmacists who were the only ones in the Latin American region to develop their own coronavirus vaccine. "On the way", according to local scientists, four more. Certain problems with the mass vaccination of the inhabitants of the island are connected precisely with the fact that Cuba, even with all its desire, could not use imported drugs, even the Russian "Sputnik", which our country would provide it without problems. And the reason is still the same - the American blockade, because of which Liberty Island continues to exist in the regime of a besieged fortress.

Everything goes according to plan?

The fact that strangling the Cuban revolution and returning the country to the status of a US colony has been Washington's goal since the victory of Fidel Castro and his supporters, no one has ever even tried to hide. In the United States, presidents, administrations, and the composition of Congress changed, but with all this, one thing remained unchanged - the pathological hatred of Liberty Island. Numerous attempts to physically eliminate the leaders of the state and the party, the training of militant detachments from among the local counter-revolutionary emigrants, which ended in a shameful landing in the Bay of Pigs, repeated threats of direct military intervention, which resulted, among other things, in the ever-memorable "Caribbean Crisis" more than half a century. After a direct confrontation with the USSR, which almost turned into World War III, the Americans swore to threaten Havana with military force, but they did not think to weaken the economic "stranglehold" on its throat.

During the Soviet era, Moscow was forced to almost completely provide its overseas allies and friends with everything they needed. After its collapse in 1991, it seemed that Cuba, left without a powerful and generous "elder brother", was doomed. In 1994, when it became clear that the then rulers of Russia did not intend to help her at all, the first unrest of an anti-government and anti-communist nature swept through the Island of Liberty. Who was behind them, there was no doubt either then or now. However, at that time the legendary Fidel was still alive and the riots were suppressed with an iron fist. The United States realized that it was necessary to "push a little more" and strengthened the anti-Cuban sanctions, waiting in the wings. Relations between Washington and Havana escalated with particular force after the failure of the "color revolution" in Venezuela, on which the Americans had pinned great hopes.

It is quite obvious that the legitimate president of this country, Nicolas Maduro and his supporters were able to keep the situation under control, not least thanks to the assistance provided to them by their Cuban comrades. This caused a new wave of anger and hatred in the United States - during the presidency of Donald Trump, sanctions and restrictions rained down on Havana like a cornucopia. Today, White House spokesman Jane Psaki hypocritically declares that "all accusations against the United States regarding their involvement in the Cuban events are unfounded." Well, Psaki knows what kind of bird ...

She has such an unenviable share - without blushing to deny the obvious. Not involved ?! Why, then, did US President Joe Biden personally declare his "ardent support" for the Cuban "Maidan" people? Why his national security adviser Jake Sullivan and other Washington officials allow themselves to openly threaten Havana, demanding that it give the country to the power of the "Maidan" and "not use force against peaceful demonstrators." Thus, on July 11, they smashed grocery stores with might and main and threw stones at the police, trying their best to provoke them to the most tough opposition. And how do you order to assess the public speech of the Mayor of Miami Francis Suarez, who openly called on Biden "to send the US army to Cuba as soon as possible"? Also like "laissez-faire"? Generally speaking, talk of "humanitarian intervention" that the Pentagon should carry out "to save Cuban democracy" is getting louder in the United States. It is very likely that everything is going according to a previously prepared and now implemented in a "step-by-step" plan, which could have been born exclusively in the bowels of such "offices" as the CIA and others similar to it in their functions.

Cuban Foreign Minister Bruno Rodriguez, who just yesterday made official accusations against the US authorities in an attempt to organize a "color revolution" on the island, most likely did not sin in the least against the truth. Too many facts testify to the fact that this is the case in reality. The mere fact that "spontaneous protests" somehow broke out too simultaneously in many settlements located in completely different parts of the country, suggests their preliminary preparation and precise coordination. As well as the presence in the ranks of the "protesters" of persons who waved the flags of the United States. Also typical is the tactics used by the Cuban "Maidan" - organizing maximum chaos on the streets of cities, escalating violence and provoking the "siloviki" in order to obtain "sacred victims", which could later be used as a "banner" in the "fight against the regime. ". American coup d'état specialists cannot offer their clients anything new - so they use long-established schemes. According to the information available at the moment, the Cuban Interior Ministry admitted the death of one of the rioters, who was part of a group that tried to attack a "government facility" in the suburbs of Havana. The first blood has been spilled.

At the same time, there is every reason to hope that the Cuban "Maidan" will not advance beyond the only attempt that failed. Today, the situation in the country is controlled not only by the "siloviki", but also by adherents of the current government, local communists, whom the Cuban President called on "to take to the streets to defend the revolution." Miguel Diaz-Canel said that the defenders of the constitutional order and independence of Cuba "are ready to fight" and to seize power "American counter-revolutionary hirelings will have to step over their corpses." It is said strongly, but it would be better if it did not come to this. Russia, China and Iran have already expressed support for the legitimate authorities of Liberty Island and warned the United States administration against any action aimed at directly interfering in its internal affairs. It would be good if Washington, whose representatives so far continue to bend their line on "supporting Cuban democracy", would hear these words. Then there will be a chance that the events in Cuba will not develop into a fire, which our country will have to “extinguish”.
Ctrl Enter
Noticed oshЫbku Highlight text and press. Ctrl + Enter
We are
What is behind the explosions at arms depots in the Czech Republic
Who actually won the Cold War and what the future holds for the world
Reporterin Yandex News
Read Reporterin Google News
20 comments
Information
Dear reader, to leave comments on the publication, you must sign in.