Completion of Nord Stream 2: who will be responsible for the Akademik Chersky fiasco 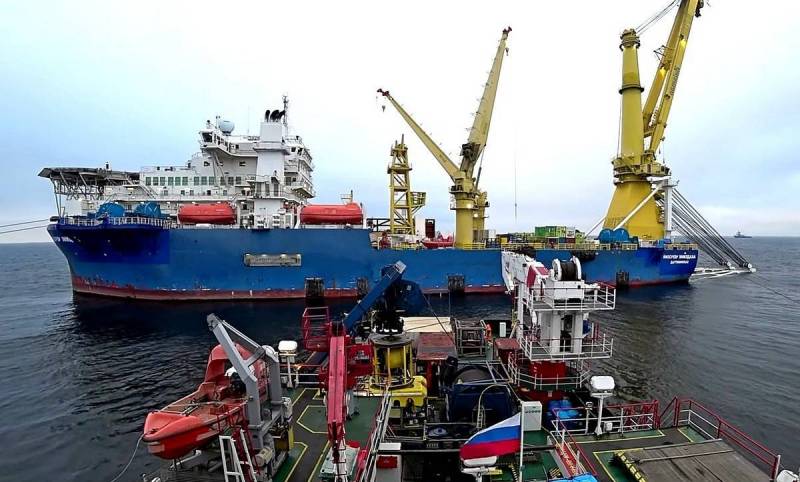 Recent ones news from the construction of SP-2: July 17, KMTUS "Akademik Chersky" returns to the "A" branch. This was reported by the German Federal Administration for Waterways and Shipping. Its task is to lay 15 km of pipes in an exceptional German economic zone in shallow water in the area of ​​the Adlergrund bank (there the depth is not more than 22 m). "Akademik Chersky" will move towards TUB "Fortuna", which is laying its part of the route in the exclusive Danish economic zone at depths of 60 to 63 meters. At the moment, Fortuna has 59 km to go (in this figure, both the Danish and German sections of the pipe). The latter is 14,4 km, of which 2,6 km is shallow water, the Chersky will not be pulled further 2,6 km, because it is more convenient to dock the two parts of the gas pipeline at shallow depths.


What follows from this? Putin is in a hurry, the blood from the nose must have time to lay the pipe before September 26, before the day of the elections to the Bundestag. Now the weather in the Baltic has deteriorated somewhat. And although the temperature is kept in the region of 20 ℃, but with rains and thunderstorms, the wind speed is from 9 to 12 m / s, with gusts up to 16 m / s. With this wind, the laying speed decreases. The fact is that when the wind increases over 10 m / s for Chersky and over 8 m / s for Fortuna, they have to drop the pipe so as not to lead to an accident. The Swiss "Pioneering Spirit" could operate at a wind speed of 6 m / s, without dropping the pipe at all and without reducing the laying speed (its maximum speed was 4,8 km / day). It should also be borne in mind that it takes 12 hours for Chersky to lift the pipe, and almost a day for Fortuna (from the moment the hook operation starts to the start of the laying movement). In addition, the speed of laying is also significantly influenced by the height of the wave (sea agitation), I'm not talking about the depth and topography of the bottom, wind direction, course to the wave, current speed, water density and the presence of floating algae. This summer, the weather at the place of work did not work out. Locals will not remember such a frequency of storm winds on the Pomeranian seaside. If the weather conditions allowed, the “Akademik Chersky” according to its technical characteristics is capable of laying up to 3,15 km / day (with a wind speed of no more than 4 m / s), and “Fortuna” up to 1,21 km / day (with a wind no more than 3 m / s). As the wind speed increases, the paving speed naturally decreases.

But the trouble is that Akademik Chersky did not reach its design indicators, giving a maximum of 400 to 700 m / day, which is why it was replaced by Fortuna. Fortuna has been setting records for laying speed in recent days, reaching 1,3 km / day. The section in German territorial waters that Akademik Chersky would pass instead of her in 2 days, while Chersky is given almost a month. You yourself understand that not from a good life - at “Ak. Chersky "are obvious problems, but Putin is in a hurry. Even two days count.

How we got to such a life. History of the issue

As of December 21, 2019, when the Swiss company Allseas with its famous pipe-laying vessels Pioneering Spirit, Solitaire and Audacia, due to US sanctions announced by Trump, suspended its participation in the project and withdrew its vessels from the Baltic sea, on both branches of the SP-2 she had to lay 148 km of pipes out of the planned 2460 km. At the moment, out of the remaining 148 km, Fortuna's efforts have laid 63 km of the B branch, the remaining 85 km of the A branch was to be laid by Akademik Chersky. And on April 27, 2021, he started these works ("Fortuna" has been working there since December 2020). But for reasons beyond his control, "Chersky" failed. As a result, on the night of June 15, TUB "Fortuna" changed it to the "A" branch. At the time of replacement, he only had to stretch 68 km of pipe, i.e. in 49 days of work, he laid only 17 km. Crazy productivity - 350 m / day at a design paving speed of 3,15 km / day.

Considering the cost of KMTUS "Akademik Chersky", which exceeds $ 1 billion, this is a fiasco. The usual pipe-laying barge TUB "Fortuna" (although it is not ordinary at all!), Which, unlike the "academician", does not have a dynamic positioning system that allows keeping the vessel on course without using anchors, coped with the task at a lower cost, and most importantly, faster.

What is Fortuna? It is an anchor barge with a 12-point positioning system for the construction of offshore subsea pipelines. Built at the Shanghai Zhenhua Heavy Industry Co. Ltd. in Shanghai in 2010, modernized in 2011. Total displacement - 39 tons, dimensions - 989 meters in length and 169 in width, height - more than 46 m, draft - from 13,5 to 5 meters. Maximum pipe laying depth - 9 m. Crew - 200 people. The barge is equipped with a 310-anchor positioning system, with anchors weighing 12 tons. To supply electricity, Fortuna has 20 diesel generators of 4 kW each. The lifting equipment consists of a crawler crane with a lifting capacity of 2500 tons and a standard ship crane on the left side of the vessel with a lifting capacity of 250 tons. 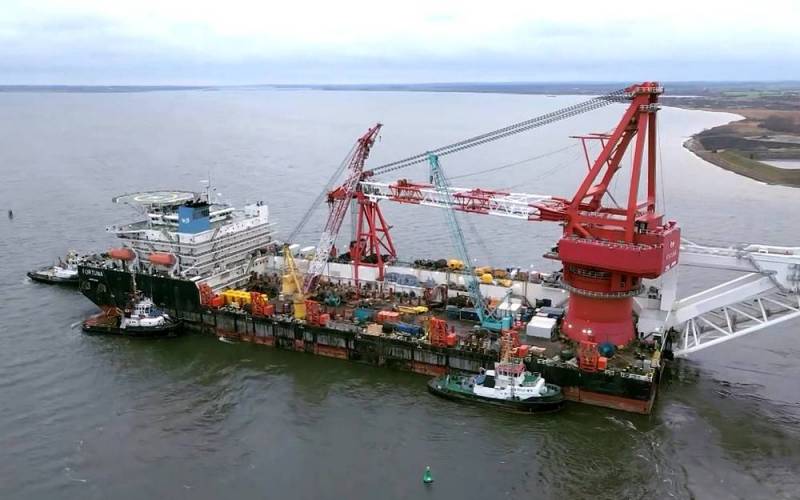 After the modernization carried out in 2012, a crane with a lifting capacity of 1600 tons (300 tons at an outreach of 72 m) was installed on the vessel. Also on the deck, it is possible to install a standard crane with a lifting capacity of up to 2,5-3 thousand tons. About the design speed of pipe laying at 1,21 km / day (with a wind of no more than 3 m / s), I have already said above. About the disadvantages in the form of the lack of a dynamic positioning system, too. Before the appearance of "Chersky" was the flagship of the Russian pipe-laying fleet. It seems that it remains so. Owner: KVT-Rus LLC, Moscow, although before the sanctions it was part of the MRTS fleet (Mezhregiontruboprovodstroy). Previously, the port of registration was Hong Kong, now it is Arkhangelsk.

The main purpose of KMTUS "Akademik Chersky" is to lay pipelines with a diameter of Ø 6 - 60 inches (outer Ø, including coating). And his story is not at all ordinary, but as if written specially for a cool spy series. The pipe-laying vessel Akademik Chersky (formerly Jascon 18) IMO: 8770261, was laid down in 2007 in China at the Jiangsu Hantong Ship Heavy Industry shipyard in Tongzhou by order of the Nigerian-Dutch company Sea Trucks Group Limited (STG). The project was developed by the Norwegian company Vik-Sandvik. The Jascon-18 is a multipurpose construction support vessel. In June 2011, Jascon-18 arrived at the Kwong-Soon shipyard in Singapore for completion. In December 2015, the vessel was purchased by the Singapore branch of the Russian company MRTS. To purchase the vessel, the company, under the guarantee of Gazprom, took out a loan from Gazprombank in the amount of USD 1 billion. In January 2016, the ship was arrested in Singapore following a lawsuit filed by a shipyard for failure to pay the full cost of construction. After the dispute was resolved, in June 2016, the vessel was transferred to the balance sheet of Gazprom Flot LLC, which renamed it to Academician Chersky (in honor of Nikolai Chersky, Academician of the USSR Academy of Sciences). Until August 2017, it was in the Indonesian port of Batam, then it was relocated to the Russian Federation (then the SP-2 was only at the stage of signing and the use of the "academician" in it was not planned). Initially, Gazprom-Flot intended to use KMTUS for the development of the Kirinskoye gas condensate field in the Sea of ​​Okhotsk as an auxiliary vessel, for which it underwent modernization and retrofitting at the Nakhodka shipyard. All work was completed by May 31, 2019 and cost the customer 813,763 million rubles. 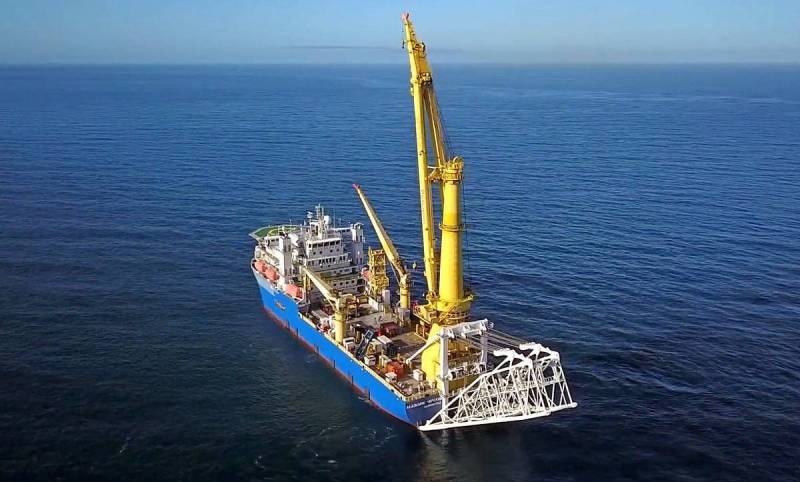 However, when the problem with the completion of SP-2 surfaced, it turned out that KMTUS “Ak. Chersky "is not suitable for solving such problems, since it does not have the necessary welding and installation equipment. And then, urgently at the end of December 2019, Gazprom Flot announces an open tender for the execution of work on the retrofitting of KMTUS with welding and technological equipment. The cost of the work was estimated at 873,5 million rubles. A tender was announced, the results of which were announced on January 30, 2020. It was won by several Western companies. Retrofitting a vessel under the sanctions is a non-trivial task, to put it mildly. Nevertheless, European manufacturers contrived to equip the "academician" with the latest equipmentby supplying the vessel with equipment worth at least $ 10 million. The Italians and the Dutch distinguished themselves. Italian company Nuova Patavium supplied pipe edge processing machines and electro-hydraulic power units for them, another Italian company Opus SRL supplied pneumatic centralizer elements for automatic pipe welding, and Dutch Vermaat Technics BV equipped the vessel with an ultra-modern computerized external orbital welding system Veraweld Torch System D. The Kremlin has cleverly bypassed US sanctions through a system of padding firms and under-invoicing. As they say, every cunning Santa Claus always has his own Macaulay Culkin (those who watched "Home Alone", they will understand). The final modernization and retrofitting of "Chersky" took place in the German port of Mukran on the island of Rugen - the logistics base of SP-2, where it arrived, having made an unprecedented three-month transoceanic passage from the port of Nakhodka across three oceans (Pacific, Indian and Atlantic) around Africa, accompanied by warships convoy with calls to all possible ports. Such a round-the-world odyssey also cost Gazprom a pretty penny. And all this just in order to then swallow dust from under the hooves of some "Fortune"?

I have only one question (more precisely two) - who is to blame for the failure of “Ak. Chersky ”, and who will be responsible for this failure? As it turned out, we were able to complete the SP-2 without it, mainly through the efforts of "Fortuna". Why was such an expensive banquet necessary and what went wrong?
Ctrl Enter
Noticed oshЫbku Highlight text and press. Ctrl + Enter
We are
Laying of Nord Stream 2: the problems of Akademik Chersky turned out to be a reality
After the completion of the construction of the SP-2, Putin will be able to raise the issue of Donbass point-blank
Reporterin Yandex News
Read Reporterin Google News
28 comments
Information
Dear reader, to leave comments on the publication, you must sign in.