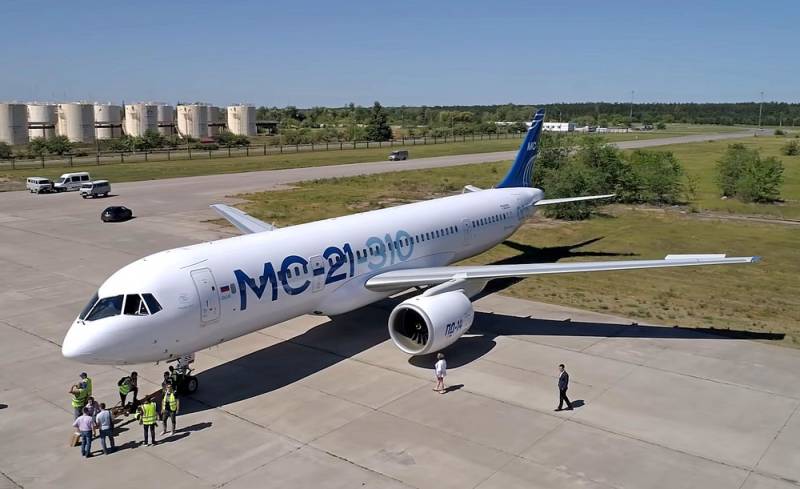 The Russian government decided to allocate huge funds for the development of civil aircraft construction. In the next 10 years, over seven hundred new aircraft and helicopters of various classes are to be built. It would seem that the joy of the cabinet of ministers about the problems of the industry can only be applauded, but still there were dissatisfied, who believe that civilians almost "robbed" the military, and budgetary funds should be directed to the needs of the RF Aerospace Forces. Moreover, some experts believe that the allocated amounts are excessive, if not completely harmful. But is it really so?


Let's first go through the list of what the 1,84 trillion rubles are allocated for. The amount is really impressive, but what will the country get on the way out?

First of all, this is the MS-21, the most promising domestic civilian airliner, our “great white hope”. In the short-haul segment, state support will be given to the Superjet-100 and the Il-114 turboprop. A light aircraft "Baikal" (LMS-901) will be used for regional transportation. Also, Rostec has been tasked with developing 5 models of new multipurpose helicopters. And in total, by 2030, 735 civil aircraft will be produced in the country. So what do we see? Finally, the financial flow went like a river to the restoration of the aircraft building industry. All market niches will be closed, except perhaps the long-haul one. Moreover, according to experts' forecasts, by 2030 the state will be able to return up to 450 billion rubles in taxes. And this is a very positive trend. However, we cannot do without pitfalls.

First, it is worthwhile to deal with the claims that military programs are allegedly "robbed" due to the development of civilians. It's not like that at all. Or rather, not at all. The fact is that funds for the needs of the civil aircraft industry are allocated mainly not from the federal budget, but mainly from the liquid part of the NWF. Yes, this fund invests 1,59 trillion rubles out of 1,84 trillion, and only 244 billion will go from the state budget. That is, it cannot be said that the financing of the MC-21 or Il-114 is carried out at the expense of sequestering the costs of the production of military aircraft. On the contrary, one should be glad that the funds of the NWF are going into the development of the domestic industry, and not into some "wrappers" of foreign securities. But on this, alas, the good news are running out for now.

It should be borne in mind that Russian aircraft will enter the market at a very difficult time. Due to the consequences of the coronavirus pandemic, air traffic volumes have dropped sharply, and with them the demand for new airliners has fallen. The MS-21 and the updated Superjet-100 will have to compete with the products of leading Western corporations, which traditionally dominate the world market. While it is quite possible to attach domestic aircraft to airlines within Russia using preferential leasing programs and various methods of persuasion / coercion, this may not work abroad. Where else can we really sell, for example, the medium-haul MS-21? To Belarus? To the CIS countries? In the DPRK and Iran under sanctions? To Venezuela? Perhaps only there, and this on condition that the Irkut corporation has learned from the mistakes of the Superjet and prepares in advance all the infrastructure necessary for post-sale service.

It is necessary to explain why we are so pessimistic about the prospects for the MC-21 and the updated Superjet-100 to enter the wide international market. The problem lies precisely in the 1,8 trillion rubles that the state allocates for the development of civil aviation. The fact is that Russia is still a member of the World Trade Organization, and its norms directly prohibit such support.

Yes, Boeing and Airbus corporations have long been suing each other within the WTO, justifiably accusing each other of hidden government support for the aviation industry. The WTO Court of Appeals found that Boeing received $ 5,3 billion in subsidies from the Pentagon and NASA to develop new models of civilian airliners, including the Boeing 787. The American corporation also benefited from tax breaks provided by several states, which led to deterioration of the competitive position of Airbus. But the European corporation did not remain in debt either. A WTO investigation found that Airbus received about $ 18 billion in under-rate loans and several billion more in so-called "start-up aid" for the A380 project.
This clash of irreconcilable competitors has led to a veritable "war of duties" between the United States and the European Union. This is a very serious matter, with huge sums involved. Boeing and Airbus recently suspended a decades-long trade war to unite against China. The PRC is actively developing its national aircraft industry and has a large domestic market, so Chinese aircraft have good chances of being in demand in Southeast Asia.

But this is not all "air battles" within the WTO. While Boeing and Airbus are fighting in the premium segment, Canadian Bombardier and Brazilian Embraer competed in the segment of short-medium-haul and regional airliners. Bombardier was able to gain a foothold in the market largely thanks to loans and bank guarantees provided to aircraft buyers by the Canadian government export agency (EDC, Export Development Canada). Embraer was able to squeeze it out with the help of state-funded export credit programs PROEX (Programa de Financiamento às Exportações) and the state support program for production and export BNDES-Exim, which provided preferential terms for loans to the aviation industry and guarantees. Despite the fact that the WTO recognized these actions as illegal, both companies continue to receive ongoing financial support.

And now our country jumped headlong into this pit with snakes, which began to finance civil aircraft construction directly from the NWF, without even trying to somehow disguise state support. It is not difficult to guess how it might end. Western corporations will justifiably present claims to Russia within the WTO, which may serve as a pretext for declaring a trade war, as well as a ban on the sale of new domestic aircraft in developed countries.

Thus, the MC-21 has a chance to become a replacement for Boeing and Airbus products only in Russia itself, in the CIS, as well as in several "rogue countries", despite the fact that it is a very good aircraft.
Ctrl Enter
Noticed oshЫbku Highlight text and press. Ctrl + Enter
We are
Peace enforcement operation. Russia inflicts a preemptive strike on Kiev
US Global Economy: An End That Sneaks Noticeably
Reporterin Yandex News
Read Reporterin Google News
28 comments
Information
Dear reader, to leave comments on the publication, you must sign in.