What is behind Ukraine's rapid turn towards China 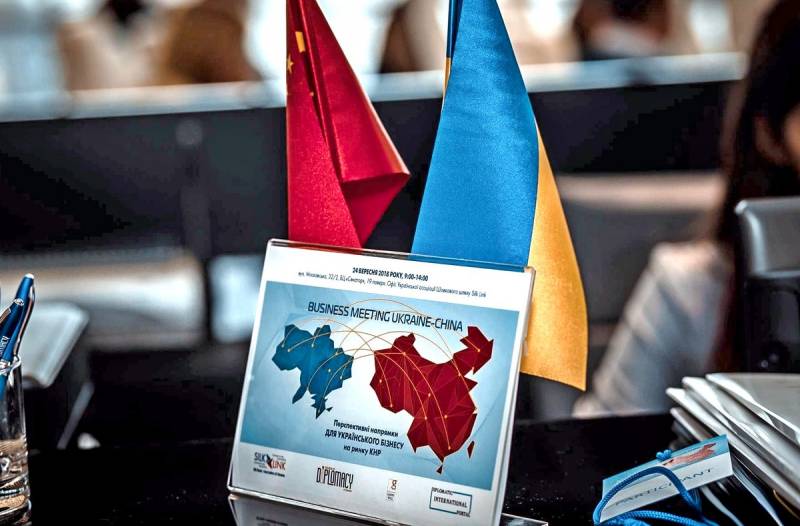 Something very strange is happening in "nezalezhnoy". To the great surprise of numerous observers, her relations with the Celestial Empire, seemingly irreparably and irretrievably spoiled by the extremely foul-smelling story of the sale of the Motor Sich aircraft building company to Chinese comrades and its subsequent unprecedented weaning "of their own free will," are experiencing not only a renaissance, but directly -so an unprecedented take-off. The case, in addition to the purely economic cooperation, it has already come to statements of a political nature, sounding in the mouths of the representatives of the Kiev authorities, frankly sensational.


What is really going on? Ukraine is once again making an attempt to outwit everyone around (forgetting that in such cases it almost invariably turns out to be a fool itself)? Or is there a real change in the foreign policy of Kiev, and a cardinal one? Wouldn't it be worth such a sharp "U-turn" for those in power over a broken neck, since they categorically cannot please their current "main partners" from across the ocean?

"Servants of the people" go to communists. Moreover, in Chinese ...

As you wish, but the agreement on cooperation between the two countries in the field of infrastructure projects signed by the head of the Ministry of Infrastructure of the "non-railway" Alexander Kubrakov and the Minister of Commerce of China Wang Wentao, which directly states the prospect of the allocation of funds by Beijing to the Ukrainian side for these same projects "on preferential terms" is only the "tip of the iceberg" of global changes in relations between Ukraine and the Celestial Empire. It would seem, what kind of "funds" are there for the devil (we are talking here, of course, about loans), and even on some favorable conditions for Kiev - after the most natural "kidok" was carried out there, having decided to "nationalize" Chinese comrades an enterprise? How could such a thing have happened?

In the penchant for charity itself, the PRC has never been noticed. Yes, annoying "punctures" happened, but to step on the same "rake" twice? This is certainly a national trait of Ukrainians rather than Chinese. Consequently, everything that happens makes us assume that this time, investing money in projects of "non-sales" Beijing has not just iron, but reinforced concrete guarantees that its profit (which, in theory, should cover all losses from an unsuccessful deal on Motor Sich ») He will receive in full. In this case, can China's claim against Ukraine for $ 3.5 billion, which is currently pending in international arbitration, play the role of a "whip"? "If you decide to wag again, we'll sue and undress to the bone"? It is quite possible, but this is clearly only part of the big picture. As already mentioned, the Ukrainian “turn” towards the Celestial Empire is far from being limited by the “infrastructural” agreement.

A significant event here, perhaps, can be considered the magnificent presentation of the book "Xi Jinping on Public Administration", which was published in Kharkov with Chinese money, but at the suggestion of the Ukrainian government, which took place in Kiev. By the way, the list of members of one who participated in the event we are talking about is impressive - a couple of deputy prime ministers, a minister of the Cabinet of Ministers, a deputy foreign minister, a number of people's deputies ... the rank of a serious step to strengthen interstate relations. Moreover, on the eve of the centenary of the Communist Party of China, the head of the parliamentary faction of the pro-presidential Servant of the People party, David Arakhamia, on the eve of the centenary of the Communist Party of China, not only congratulated its leaders, members and “the entire Chinese people” on such a “significant event,” but also broke out in which he uttered such that at least take out the nationalist and Bandera "saints".

It turns out that for the current Ukrainian government "an example and a role model" are not only the stunning economic successes of Beijing, but also ... "the experience of the CPC in building and developing the state"! The head of the "party of power" of the "non-profit" agreed to the point that "the principles of his fellow party members in many respects coincide" with those professed by the Chinese communists - since both of them "serve the people"! Therefore, they will definitely try to "adopt the experience of the CCP in building a network of party organs throughout the country." Here it is not clear, for example, whether Arakhamia intends to organize the production of quotation books by "Comrade Ze" or, in accordance with the trends of the times, the matter will be limited to "cutting" from his speeches in the "95th quarter", obligatory for memorization for all Ukrainians?

Is Kiev going against Washington?


Over these wretched attempts to surpass in the level of toadying African princelings, during the time of "dear Leonid Ilyich" who came to Moscow for handouts, wearing a badge with Lenin's profile on their loincloths and having learned a couple of quotes from his works, one could laugh as much as they wanted, if not for a number of not at all funny circumstances. It is clear that in order to snatch some money for the "Big Construction", where they are plundered by the Ze-team in absolutely fantastic proportions and at a fantastic speed (this is not the data of "Kremlin propaganda", but of the Ukrainian Prosecutor General's Office), the same Arakhamia ( and Zelensky himself) will quote and extol even Chairman Xi, even Chairman Mao, even Confucius ... For the Chinese, the inclusion of Ukraine, due to its transit position in the "One Belt - One Road" looks quite attractive and may well push to participate in development the infrastructure there. Moreover, the logic dictates: the bulk of investments (in the form of loans or some other kind) will be mastered by companies from the PRC. The Ukrainian government will get generous kickbacks, and the Ukrainian people will get the interest that has run over all this money, albeit “preferential”.

The fact that Kiev is governed from Beijing is easily proved by the recent blatant (by the standards of the "world community") the fact that the Ukrainian side revoked its signature under the UN resolution, which "condemns the actions of the PRC in the Xinjiang Uygur region" and demands them " international investigation ". Beijing followed the path of the unforgettable house manager from the "Diamond Hand" - only instead of "turn off the gas" there was "we will not give a vaccine." Ukraine "changed shoes" as cute. For the first time, or what? Or the last one ?!

In addition, China can easily collapse the Ukrainian economy, not really bothering itself. It is enough for him to simply stop the purchases of agricultural products and raw materials going from there to the East (primarily iron ore). In 2019-2020, the trade turnover between the countries grew not only by some miserable percentage - at times. If the "shop is closed", Kiev will be left without a colossal (and, in fact, the only stable) source of foreign exchange earnings to the state budget and the country in general. Does it all add up? But no! Declaring today a sharp expansion and deepening of cooperation with China, and even making open curtsies towards its communist leadership, Ukraine is challenging the United States, which has recently spent the lion's share of its own foreign policy efforts on building the widest and most powerful anti-Chinese coalition as in the West and in the East.

The same story with Motor Sichu, the deal on which was, in fact, blocked at the US Embassy, ​​more than eloquently testifies to how Washington views the prospects for cooperation between Kiev and Beijing. Dithyrambs against the Ukrainian Communist Party politicianswho have declared "total decommunization" almost the main goal of their lives are not surprising. Ukrainian, sorry for the expression, "establishment" and decency, coupled with conscience and honor, are completely incompatible things ... However, in this case, we should talk not about principles, but about the most common instinct of self-preservation, which, as you know, even coelenterates and invertebrates like Arakhamia and Zelensky. What made him disconnect ?! Mr. Biden, following his predecessor firmly determined to "take China to the nail", will definitely not get away with such "jokes".

On this account, I must say, there is a version - however, pretty giving off a phantasmagoria. In accordance with it, Volodymyr Zelenskyy (and, equally, his closest entourage), imagining himself to be "figures of a world-historical scale", simply decided to continue the policy of himself towards his "Western partners" (and, first of all, the United States), that neither is unpretentious blackmail. Sensing the obvious cooling of Washington, which is expressed, among other things, in the unwillingness to indulge Kiev with new handouts, in the "non-profit" they decided to play the play "Pivot to China". The script is as old as the world: "You are evil, evil ... We will leave you!" In the light of this version, the fact that any steps that strengthen the position of the Celestial Empire anywhere in the world (and even more so in a country that the Americans quite reasonably consider their own fiefdom) is for Washington that a sharp knife works for Ukrainian intriguers hand. Zelensky's visit to the United States has been repeatedly postponed, turning into a distant and increasingly unlikely prospect, new assurances of "decisive support" are heard less and less from across the ocean, the US Navy is staging provocations not in the Black Sea, but in the Yellow Sea, so by demonstrating which of the "fronts" is more important for them ... All this pushes Kiev to try, like an angry and capricious child, to draw attention to itself with loud hysteria and antics that will definitely shock the "elders". Just how not to go too far in such efforts.

The likelihood that the "Chinese dances" of Zelensky and the company will be ignored and ignored in the White House and the State Department is zero. By the way, there is one more thing - a big sale of agricultural land is about to begin in Ukraine. It is more than likely that Beijing, which has suddenly “thawed out” again, is targeting Kiev, including them. But the West, for a long time and by any means, "pushed through" the opening of the land market in the "non-sale" certainly did not try for the sake of the interests of the Chinese comrades. What will be his response to this situation? Predicting them with a fairly high degree of probability is now problematic. However, the concern is that as one of the "measures of influence" on Ukraine may become provocative actions that will lead to a sharp exacerbation of its relations with our country. A kind of "asymmetric response", in the light of the implementation of which Zelensky will not have time for Chinese money and the "Big Construction". I am sure we will find out soon enough how sharp and large-scale the reaction of the United States and its allies will be.
Ctrl Enter
Noticed oshЫbku Highlight text and press. Ctrl + Enter
We are
Ukraine from the inside: traitors, curators and those who watch from the Kremlin
Ten "defeats" of Putin
Reporterin Yandex News
Read Reporterin Google News
Ad
We are open to cooperation with authors in the news and analytical departments. A prerequisite is the ability to quickly analyze the text and check the facts, to write concisely and interestingly on political and economic topics. We offer flexible working hours and regular payments. Please send your responses with examples of work to [email protected]
6 comments
Information
Dear reader, to leave comments on the publication, you must sign in.