Why China isn't building warships for the Russian navy 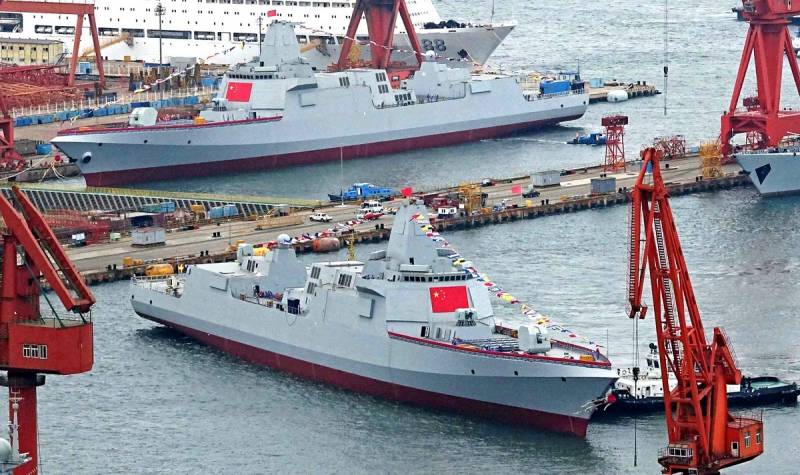 The depressing state of the surface component of the Navy remains one of the most sensitive pain points in Russia. Yes, the process of rebuilding the fleet is gradually underway, but the complex of problems in the industry is so great that overcoming it will take many more years. With great difficulty we were able to localize the production of power plants for frigates of Project 22350, and we can only dream of building new destroyers, cruisers, and even more so aircraft carriers.


But what if tomorrow we really have to "lightly" make war in the oceans, which are hinted at by the provocative actions of the British Navy? There may no longer be time for the buildup, and no one cares that Russia is frankly not ready for this, on the contrary, weakness only provokes aggression. So are there any real options for our country to acquire a combat-ready surface fleet within a reasonable time frame?

We have to admit that the state armaments program (GPV) for the years 2011-2020 for the navy turned out to be largely a failure. If everything is more or less normal with regard to the underwater component, then there were a lot of serious problems with the surface component.

At first, even after the adoption of the GPV, the Ministry of Defense repeatedly revised it, setting sometimes overly optimistic construction dates and linking them with the parallel development of promising weapons for ships, which often led to a shift in the implementation deadline to the right.

Secondly, thwarted the program for the construction of frigates of Project 22350 and Project 11356, Kiev's decision to stop supplying gas turbine power plants to Russia. Corvettes of projects 20380 and 20385, which were left without German MTU diesel engines, also fell victim to Western sanctions. If NPO Saturn was able to cope with the replacement of marine engines for frigates of Project 22350, then Chinese-made diesel engines have to be installed on corvettes, and the Zvezda plant disrupted the supply of domestic M507 diesel engines for small rocket ships of Project 22800. Of course, sooner or later, import substitution will be completed. but the timing, timing ...

Thirdly, the situation is extremely unsatisfactory with the speed of construction of new ships, as well as the repair and modernization of old ones. Building in our country takes a long time and is expensive, many times longer than in the West or in Korea, Japan and China. No wonder the order for floating docks for the newest Russian icebreakers "sailed" to Turkey, where the contractor offered much more comfortable conditions in terms of price and timing.

So, what do we have in the bottom line. There is a rapidly growing demand for the construction of new military and civilian ships. We have irrevocably lost the famous shipyards in Nikolaev together with Ukraine. The remaining shipyards are not enough for everything, their capacities are reserved for years ahead, and they build for a long time and expensively. This is reminiscent of the so-called "trishkin caftan", when the project of a domestic aircraft carrier would have to free up the stocks of "Sevmash" to the detriment of the construction of submarines. You have to choose either this or that. At the same time, due to the sequestration of the defense budget, promising projects, such as the nuclear destroyer Leader, were shelved for a long time, most likely forever. This means that in the next decade we will not actually build anything larger than the SuperGorshkov frigate. That is, the future of our Navy is: modernized old Soviet "Orlans", cruisers and BODs, as well as new frigates of projects 22350 and 22350M plus two brand new UDC under construction in Kerch. To be honest, sparse.

The situation in the shipbuilding industry is extremely depressing, and the most correct solution seems to be the creation of a new shipyard, capable, if necessary, of building an aircraft carrier, repairing a TARK, and taking over part of orders for frigates and submarines to speed up the implementation of GPV. However, so far nothing has been heard about such initiatives from the authorities. And then what is left? Back in 2009, the Commander-in-Chief of the Russian Navy, Vladimir Vysotsky, said the following:

We at least do not exclude the purchase of foreign ships abroad.
Naturally, the admiral was immediately attacked with criticism, but what did he say so seditious in essence? Recall that the legendary Russian cruiser Varyag was built to order in the United States, like the battleship Retvizan. The gunboat "Koreets" was produced in Sweden. The battleship "Tsesarevich" was built by France for the Russian Empire. During the Soviet era, our Navy used BODs created in Poland, and shipbuilding orders were placed in the GDR, Romania and Yugoslavia. In general, there was nothing shameful in this either for Tsarist Russia or for Soviet Russia. The main thing is not to stick, like the Russian Federation, with the French Mistrals, but these problems could have been avoided without making an order in a NATO member state. And where, in theory, could we build the large surface ships we are so missing quickly and relatively inexpensively?

Logic suggests that China could act as a partner for the implementation of such a program. The pace of work of the Chinese shipbuilding industry is simply amazing, warships appear there like hot cakes on a market day, aircraft carriers are growing on the stocks day by day. At the same time, Beijing does not hesitate to build custom-made warships for its allies. For example, the Chinese are helping Pakistan to strengthen its navy. Rear Admiral Faisal Rasul Lodhi, Deputy Chief of Staff of the Islamic Republic's Naval Forces, explained:

The Pakistani Navy will receive 2021 Type 4A frigates by 054. These ships will significantly improve combat capabilities.
Pakistani Navy and will make a significant contribution to operations to ensure maritime security in the region.
Thus, if desired, Russia could also place an order at Chinese shipyards for the construction of warships for the Russian Navy: both on a turnkey basis, with constant control by the customer over the progress of the contract, and partially, with subsequent refinement and armament already at domestic shipyards. The most interesting thing is that theoretically it would be possible to order ships of more serious classes than our shipyards can handle, destroyers and cruisers of Chinese projects. Perhaps Beijing will be ready to build such ships for Moscow, taking into account the customer's requirements. No kidding, the Chinese are pretty far ahead, and they have a lot to see in the Navy.

For example, these are the fourth generation destroyers of the 055 Nanchang project, with a total displacement of up to 13 tons, an analogue of the American Aegis system and universal launchers with 000 cells. In terms of size, these Chinese destroyers are second only to the Zamvolt, and in their characteristics they are close to the Ticonderoga-class missile cruisers. The PRC Navy intends to acquire 112 such multipurpose ships. Their predecessors are Type 16D destroyers, which are analogous to the American Arleigh Burke. The Chinese have already built 052 missile destroyers of this class. Also, the PLA has modern BODs and UDCs and is building the third aircraft carrier, which should approach the Nimitz in terms of capabilities.

If it is possible to reach acceptable terms of the agreement, then Russia could give China an order for the construction of a series of large surface ships, which it is not yet capable of. Obviously, this will be both faster and even cheaper than trying to stretch the “trishkin caftan” of the domestic shipbuilding industry for all the needs of the Russian Navy. Well, or let's still build a new military superyard in our country.
Ctrl Enter
Noticed oshЫbku Highlight text and press. Ctrl + Enter
We are
The trouble came from where they did not expect: How Russia coped with the lack of ship turbines
New weapons on the way: What is known about the anti-satellite complex "Burevestnik"
Reporterin Yandex News
Read Reporterin Google News
24 comments
Information
Dear reader, to leave comments on the publication, you must sign in.