S-400 mercilessly "shot down" the American F-35 in Turkey

July 27 2018
5
Between the two NATO allies - the United States and Turkey - ran a "black cat". The subject of disagreement is the possible purchase by Ankara of S-400 anti-aircraft missile systems from Russia, which Washington is opposed to. 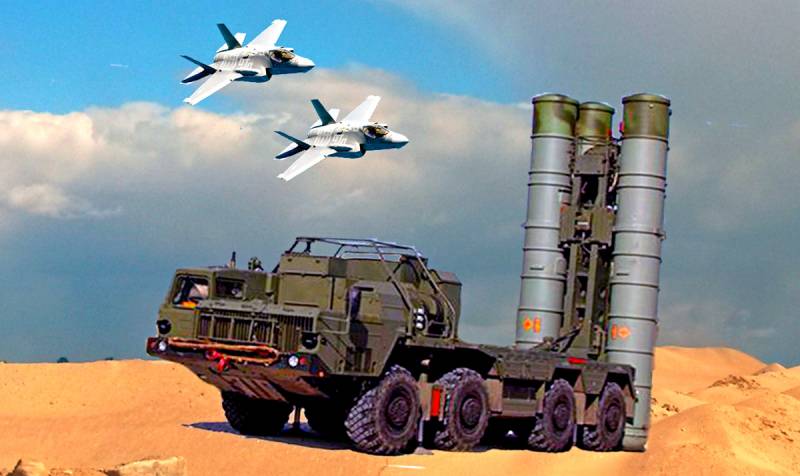 It is possible that U.S. President Donald Trump would not have raised the question, but the Congress is determined: either Turkey refuses to buy the S-400 from Russia, or the U.S. refuses to supply more than a hundred F-35 fighters with a total value of $ 10 billion.

Before leaving for the summer vacation, the US Congress must pass a law on defense spending for next year. The bill says that Washington may not impose any sanctions on only three countries that buy Russian weapons. These are India, Indonesia and Vietnam. The presidential administration tried to convince congressmen to include Turkey in this list, but the attempt was unsuccessful.

Despite the fact that Ankara is a very important ally of Washington, the US Congress does not give it concessions. The relevant committees of both houses of Congress have already agreed on a draft law on defense financing for 2019. In this project, the presidential administration’s request was not met to impose any penalties against India, Indonesia and Vietnam for the purchase of Russian weapons, since it is beneficial for Washington to maintain militarytechnical cooperation with them. But in relation to other states, including Turkey, congressmen were adamant: policy got the better of economic considerations.

In the coming days, perhaps before the end of July, the House of Representatives will adopt the final version of the defense budget for next year. In August, before leaving for the summer vacation, the Senate must approve it. Then the document will be signed by Donald Trump.

Earlier, an amendment was made to the draft defense budget for 2019 to suspend the sale of Turkey's F-35 fighters until some conditions are met. The key of these conditions is that the White House is obliged to provide Congress with a special report on what consequences may come for Washington if Ankara cooperates with Moscow and purchases weapons and technology from it.

Despite the congressional stance, the Pentagon finally sold two F-35 fighters to Turkey at the end of June. A state event was held in Texas for the occasion. But two planes are just a drop in the bucket against the background of the fact that we are talking about the supply of more than a hundred fighters, that is, one of the largest deals between the countries.

This issue is closely related to anti-Russian sanctions, since the point is that it is strongly recommended not to buy weapons from Moscow. The position of congressmen has become tougher after the meeting between the presidents of the USA and Russia Donald Trump and Vladimir Putin took place in Helsinki. As you know, after this meeting, many political opponents of Trump accused him of "concessions" to the Russian side. This is one of the reasons why it was not possible to reach a compromise between the White House and Congress regarding military cooperation with Turkey.

Now Turkish President Recep Tayyip Erdogan faces a difficult choice - to refuse or not to buy S-400? He repeatedly said that he did not intend to refuse a deal with Russia, and also spoke about the unproductive American sanctions. It turns out that for maintaining this position the Turkish leadership will have to pay a very substantial price. In addition, Washington has other levers of influence over its NATO partners, including Ankara, and the refusal to supply the F-35 is just the “first sign”.

What decision will Ankara make? In this regard, the Russian publication Kommersant cites the opinion of several experts. So, Vasily Kashin, a senior fellow at the Higher School of Economics, believes that Turkey needs the S-400 for security reasons, and also because of geopolitics. Anti-aircraft missile systems would allow this country to defend itself against long-range missiles. And they are possessed by several countries in the Middle East: Saudi Arabia, Israel, Iran. And relations with the United States are deteriorating, and under these conditions, an air defense system that is not controlled by the West is necessary.

Another expert - the head of the Center for Analysis of Strategies and Technologies Ruslan Pukhov - believes that Erdogan declares his intention to buy the Russian S-400, guided by the "political game" with the United States and other Western countries. If he realizes that the costs of acquiring Russian air defense systems are too high, he will refuse a deal with Russia. In this case, Moscow needs to consider compensation options, as was the case with the French Mistrals.

However, Turkey itself believes that Ankara still needs Russian complexes for the sake of ensuring security, and alternative proposals by NATO countries are unacceptable. Former Turkish Foreign Minister Yashar Yakysh pointed out that Western countries imposed additional conditions for the sale of air defense systems to Turkey, and because of this, buying the S-400 from Russia is a better option.

Orkhan Gafarly, an expert at the Center for Political Studies in Ankara, believes that his country will not abandon the Russian S-400, because "this requires a multi-vector policy." And it’s not easy for NATO to refuse to cooperate with Turkey, since its geographical location is very important for the alliance.

In this case, another important detail: Turkey is a consortium of states that took part in financing the development of F-35 fighters. In addition, ten Turkish companies produce parts for him. Thus, the Pentagon also needs to analyze how Turkey’s withdrawal from the consortium will affect their production process. Won't the restrictions on Ankara's arms supplies to Washington turn out to be a “shot in their own leg”?
Ctrl Enter
Noticed oshЫbku Highlight text and press. Ctrl + Enter
We are
Erdogan plays the “Russian card”
USA - Turkey: Either S-400 or F-35
Reporterin Yandex News
Read Reporterin Google News
Ad
The publication is looking for authors in the news and analytical departments. Requirements for applicants: literacy, responsibility, efficiency, inexhaustible creative energy, experience in copywriting or journalism, the ability to quickly analyze text and check facts, write concisely and interestingly on political and economic topics. The work is paid. Contact: [email protected]
5 comments
Information
Dear reader, to leave comments on the publication, you must to register.
I have an account? Sign in