Will Russia's new project be able to challenge Boeing and Airbus 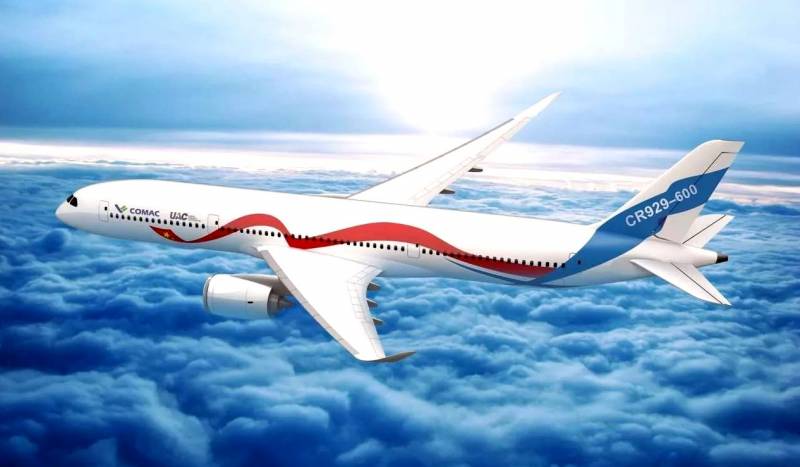 Through thorns to world markets

Russian and Chinese aircraft manufacturing, despite fundamentally different economic the dynamics of the two countries, has similar features. At one time, both states relied primarily on the development of military aviation. This was dictated by the rules of the Cold War: “enemies around” and even the closest “comrades” could turn out to be not comrades at all tomorrow. A striking example is the complex Soviet-Chinese or Soviet-Yugoslav relations.

Western countries were more pragmatic, so to speak. Their aircraft manufacturers have always tried to make a profit, and without the development of civil aircraft manufacturing, to put it mildly, it is hard to do, because the market for passenger aircraft is incomparably larger than the market for military aircraft. Therefore, now both Russia and China really want to declare themselves. In the first case, everything is more or less clear: there was once a very serious civilian aircraft industry in a deep crisis, and the thesis of "restoration of the aircraft industry" suggests that everything will be, at least, no worse than before. For China, its own passenger plane is also a matter of prestige. As well as scientifictechnical touched for the future conquest of heights.

If we talk about economic feasibility (making a profit, roughly speaking), then the situation for both countries is complicated. Western giants divided the customers: Boeing and Airbus. According to reports, the foreign market was contracted by these companies by 75% until 2025. Both offer modern, reliable and economical cars. There is no reason to doubt the potential of the Boeing 787 Dreamliner - the latest wide-body jet passenger aircraft, the construction of which is widely used composite materials. Despite all the complexity of the design, in June 2018, Boeing built 708 of these machines. Very soon, their number can equal the total number of domestic Tu-154s built over all decades. I don’t really want to talk about the Sukhoi Superjet 100 with its total number of cars built in just over a hundred and a half. If we recall specifically about wide-body aircraft (with two aisles between passenger seats), then the situation here for Russia looks very sad. IL-96 was produced in a series of 30 aircraft: apart from Cuba, none of the foreign customers bought a car. 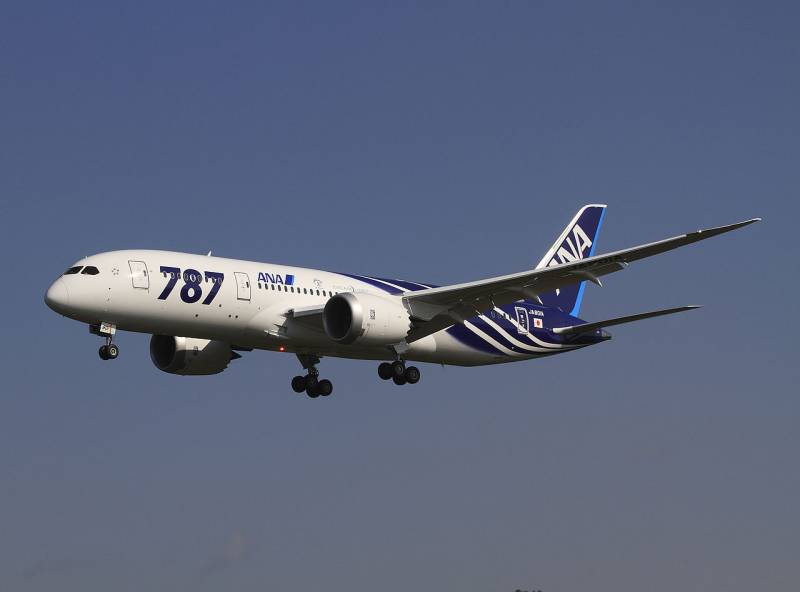 In such circumstances, when de facto neither Russia nor China have their own modern wide-body, a very ambitious project CR929 appeared. It is not often written about by the media at all, so it makes sense to say what kind of car it is. The parties signed the agreement on cooperation in this area in 2014, when Vladimir Putin visited Beijing. The model of the winged car was first shown at the China Airshow-2016 international aerospace show, and in 2017 it got its current name CR929, where C is China, R - Russia. The Russian-Chinese wide-body aircraft will be designed for 250-300 passengers. It is being developed by the Russian United Aircraft Corporation and the Chinese COMAC. The basic model will be called CR 929-600, the younger version - CR 929-500, and the older - CR 929-700. The latter will receive 320 seats. At the first stage, they want to supply the aircraft with Western-made engines: General Electric or Rolls-Royce. After 2030, it is planned to switch to the promising Russian PD-35 engine.

If we catch up with the West with the PD-14 control system, then with PD-35 we want to overtake the West. System has extremely high performance requirements.
- the managing director of Perm OEC-STAR JSC Sergey Ostapenko told reporters.

This, of course, is a very optimistic assessment, especially when you consider that European and American engine building are now far ahead of the Russian one and they all understand this very well. Suffice it to say that the Sukhoi Superjet uses the French, and the main hope of domestic aviation - the MS-21 airliner - American "engines". In the future, they want to install the aforementioned Russian PD-14s on the last aircraft, but this is clearly not the main thing for its creators now. In the case of PD-35, the announced date is indicative. Even if we assume that the engine will be ready by 2030, it is not known what competitors from different countries will be able to offer at that time.

The cost of a wide-body aircraft development program is such that Russia would hardly be able to pull the project on its own. China, apparently, needs technology. Now the cost of developing an aircraft is estimated at about 13-20 billion dollars. Russia and China participate in the project on an equal footing, investing at 50% of the total cost. Chinese COMAC intends to develop and release a metal-composite fuselage, the United Aircraft Corporation will create and will produce a composite wing. At the same time, they want to carry out the final assembly of the liner in Shanghai.

Frankly speaking, if we remove the promising Russian engines from the list, the plane does not appear to be Russian-Chinese, but Chinese-Russian. Cooperation with China and cooperation with India are completely different categories. The Chinese are not just pragmatic, they have vast experience in aircraft manufacturing and a number of key technologies that are needed specifically for the development of a passenger aircraft. This, however, is not as fundamental as another question. Namely - commercial appeal. It is assumed that the first cars customers will receive in about 2026-27. The cost of CR929 should be 113,5-117,8 million dollars. For comparison, the price of the Boeing-777 reaches $ 300 million. Earlier it was announced that the Russian-Chinese airliner will be no less than 50% composed of composite materials, so that its weight will be lower than that of passenger aircraft of comparable size and purpose. A definite plus, but this is still just a theory. 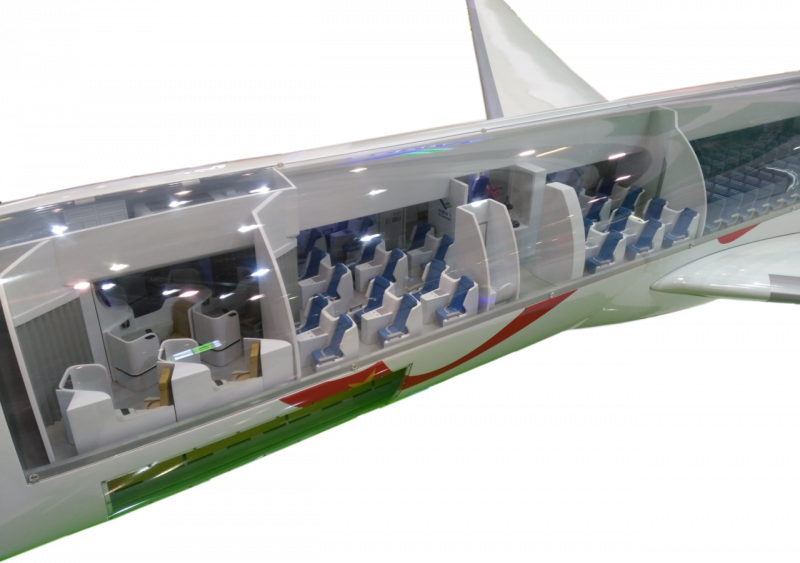 In practice, it turns out that neither Russia nor China have the experience of building new economical wide-body aircraft. And it will be hard to say whether the “first pancake will be lumpy”. But it can be said with almost complete certainty that almost nothing threatens the dominance of Boeing and Airbus in the wide-body aircraft market (except for competition between them). By the way, in 2016, Airbus and Boeing presented 20-year forecasts for the world liner market. Europeans estimated the need for air carriers in 33 aircraft (of which 500, or 9500%, are wide-body), Americans - in 29 (37% of them are wide-body). Accordingly, 240% and 24% of demand will come from narrow-body airliners such as the Boeing 71 MAX and Airbus A76neo. Will there be a place in this situation for the new Russian-Chinese aircraft?

There is almost no doubt that if the aircraft appears, Chinese companies will actively buy it, and the account will be kept on hundreds of cars. In this regard, a telling story with the promising Chinese narrow-body Comac C919, which has already been purchased in batches of a total of more than 750 cars, while almost all customers were from the Middle Kingdom. In Russia, where the default market is incomparably smaller, you can’t count on such a “miracle”. To squeeze out Boeing and Airbus in the European or American market, most likely, as we have already said, will not work either. But at a low price the aircraft may be of interest to the so-called countries. Third World: Africa, some countries in Asia and Latin America.
Ctrl Enter
Noticed oshЫbku Highlight text and press. Ctrl + Enter
We are
New Glenn Rocket: A Media That Could Crush Ilona Mask
MS-21 airliner: there are risks, there is no plane
Reporterin Yandex News
Read Reporterin Google News
Ad
The publication is looking for authors in the news and analytical departments. Requirements for applicants: literacy, responsibility, efficiency, inexhaustible creative energy, experience in copywriting or journalism, the ability to quickly analyze text and check facts, write concisely and interestingly on political and economic topics. The work is paid. Contact: [email protected]
Information
Dear reader, to leave comments on the publication, you must to register.
I have an account? Sign in