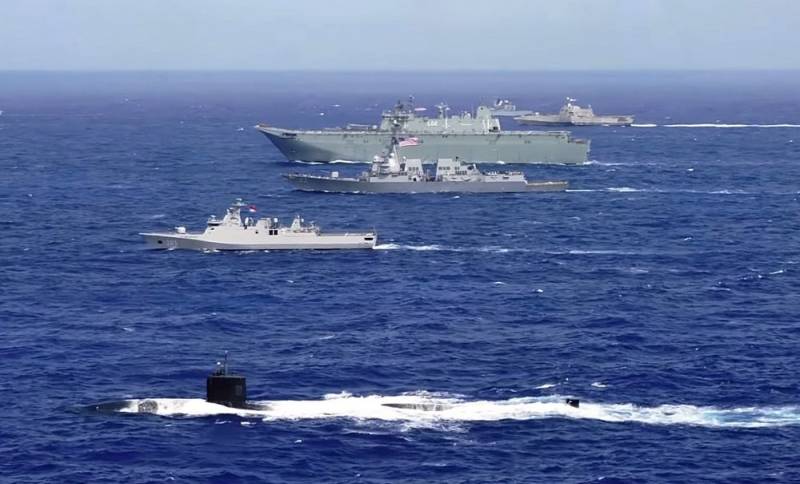 Several very important policy statements were made at the recent NATO summit. And, it should be noted that some of them sounded extremely alarming for Russia. It has become clear that the administration of President Joe Biden has relied on exacerbating relations with the Kremlin and igniting conflicts along our state border.

At first, "Sleepy Joe" made it clear that he had nothing to do with the "red lines" that his colleague Putin draws in front of him on the ground. Recall that some time ago, Vladimir Vladimirovich asked during an interview a rhetorical question whether Ukraine's NATO membership would be a "red line" for Russia, as a result of which the flight time of American missiles from Kharkov to Moscow would be only 7-10 minutes. For the previous seven years, domestic propaganda has been focusing on the myth that a country with an unresolved territorial conflict cannot join the North Atlantic Alliance. In fact this is not true. Or rather, not at all.

There are no rigid and fixed criteria for inviting a new member to the alliance. At the same time, many NATO countries have unresolved territorial claims among themselves: for example, Turkey and Greece, the United States and Canada are arguing over several border islands, Croatia and Slovenia cannot finally determine the sea border, Argentina does not recognize the Falklands as British, etc. etc. The issue with Ukraine, which has two huge problems at once in the form of the Russian Crimea and the unrecognized DPR and LPR, seems much more serious, but President Donald Trump personally stated at the NATO summit that Donbass would not be an obstacle to the entry of Independent into the North Atlantic Alliance. The only obstacle remains the problem of corruption, but this concept is very loose. The Biden family knows better.

Note that NATO demanded that Moscow de-occupy Crimea, since in the alliance:

... They strongly condemn and do not recognize the illegal annexation of Crimea by Russia and condemn its temporary occupation. Human rights violations and violations of the rights of Crimean Tatars and members of other local communities must stop.
I wonder what kind of violations of human rights and the Crimean Tatar community, in particular, are we talking about at all? I would like some specifics, so that you can answer on the merits. The bottom line is that the United States is ready to simplify the process of joining the North Atlantic Alliance for Ukraine and Georgia, which can be considered a great geopolitical defeat for the Kremlin.

Secondly, Washington is clearly not ready to limit itself to just strangling Russia by creating hotbeds of tension along its borders. Judging by the results of the NATO summit, the United States will turn the entire Black Sea-Azov basin into a zone of permanent conflict:

We call on Russia to abandon the military build-up and stop restricting shipping in parts of the Black Sea. We also call on Russia to stop blocking access to the Sea of ​​Azov and Ukrainian ports.
Quite a hypocritical statement. The Russian Defense Ministry is forced to increase its military power only in response to its strengthening by the United States and its allies in the North Atlantic Alliance. Well, stop being the first, then we'll catch up. As for "obstructing access", Ukrainian ships can pass through the Kerch Strait anyway, if they comply with the requirements of the FSB Border Guard Service. If they are not ready, and they want to "break through" by force, ignoring the new geopolitical reality, then they will have to deal with the criminal consequences of the RF Criminal Code.

Let's face it, the "mosquito flotilla" of the Naval Forces of Ukraine does not pose any particular danger to our Black Sea Fleet. A completely different alignment will be if the US Navy, together with its NATO allies, undertakes to conduct the next Operation Freedom of Navigation. Despite the increased power of the Chinese navy, American warships constantly roam the South China Sea past Taiwan, which Beijing considers to be its own. This problem has not bypassed Russia either. Last year, USS John McCain was an intruder in our Peter the Great Bay in the Sea of ​​Japan. The Seventh Fleet command subsequently clarified that it does not consider these waters to be internal Russian:

This Freedom of Navigation Operation (FONOP) protects the rights, freedoms and lawful use of the sea recognized in international law, challenging Russia's excessive maritime claims.
So, this is the Gulf of Peter the Great, but what can we say about the Sea of ​​Azov, which, after reunification with Crimea, actually became our internal one, but neither Washington nor Kiev recognizes this? This creates a huge space for all sorts of anti-Russian provocations, such as "Kerch Breakthrough-2". The Americans themselves will definitely not climb into the strait, letting the Ukrainian "natives" go ahead. At this time, they will "prop up" their rear, sending URO destroyers, frigates and other warships to the Black Sea. However, this time the Ukrainian Navy will clearly be better prepared, and the Ukrainian sailors will have a clear, unambiguous order to open fire to kill when trying to stop them, counting on cover from the NATO fleet. This time such "Kerch Breakthrough-2" will definitely not end with anything good. If the US wants to shed blood, it will be shed.
Ctrl Enter
Noticed oshЫbku Highlight text and press. Ctrl + Enter
We are
Ukraine from the inside: traitors, curators and those who watch from the Kremlin
Ten "defeats" of Putin
Reporterin Yandex News
Read Reporterin Google News
14 comments
Information
Dear reader, to leave comments on the publication, you must sign in.