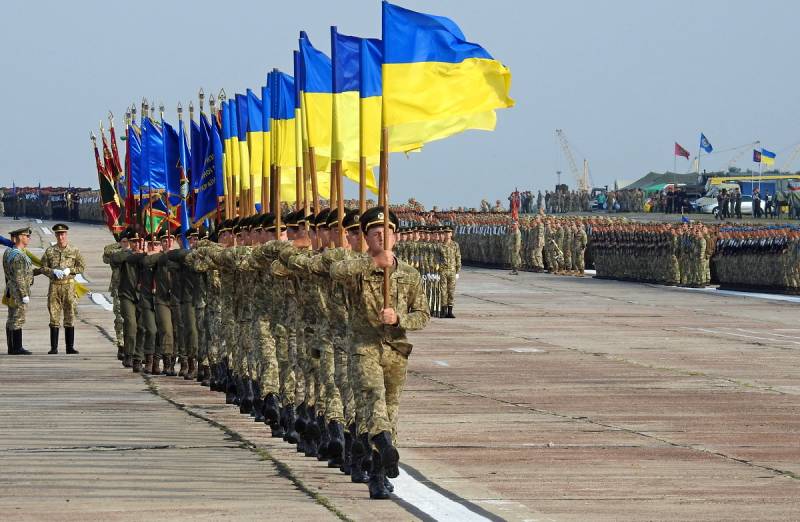 The summit of the North Atlantic Alliance that ended the day before in Brussels with its final communique, which seems to say quite clearly and unequivocally about the “Euro-Atlantic future” that certainly awaits Ukraine, quite expectedly gave rise to a new wave of lively discussions on the topic: “They will not accept, and if yes, then when?" Media "nezalezhnoy", for example, at the moment is downright full of materials devoted exclusively to this issue. The "analysts" are breaking the spears, the military and political "Experts" ...


It should be noted that disputes about whether Kiev has a chance to join NATO are also going on in the domestic media space. They are especially poignant in a recent interview with Vladimir Putin, in which our president said that in principle he did not rule out such a possibility. And nevertheless ... The answer to the question "When will Ukraine join the" North Atlantic family "? - completely unambiguous. And it sounds like this: "Never and under no circumstances!" There are quite real and objective reasons for this, which are outlined below.

1. Russia does not need Ukraine in NATO

Those who claim that Vladimir Vladimirovich, speaking with the correspondent of the channel "Russia 24", allowed the entry of "nezalezhnoy" into NATO, simply take a few of his words out of context. In this speech, which was quite no coincidence recorded shortly before the summit in Geneva and clearly addressed, first of all, to the one with whom the conversation will be going on, our president absolutely unequivocally positions such a prospect as a line, the crossing of which will be regarded by him as a direct encroachment on security of Russia and its people. With all, as they say, the ensuing consequences ... The arguments accompanying these words about the flight time of 10 or 7 minutes are, by and large, just a canvas. There are already plenty of launchers near our borders. And, by and large, do a minute or two play such a critical role in a modern war? Let us be frank, the entry of the "nezalezhnaya" into the ranks of the North Atlantic Alliance is categorically unacceptable for Moscow for much more global reasons. Putin touches the first of them when he recalls NATO's advance to the East, carried out "of its own free will" and without the slightest consideration of Russia's vital interests, which, according to the president, the North Atlanticists simply "did not give a damn" about. Consequently, if the Alliance allows itself to absorb also Ukraine, this will mean that they no longer intend to reckon with Russia in anything and never, simply "writing off" it from geopolitical "accounts."

Such a decision would actually be tantamount to an outright declaration of war and would force Moscow to begin its counterplay against the West - and without any rules at that. Moreover, there is every reason to believe that not even a full-fledged membership in NATO, but at least the provision of MAP to them will certainly encourage Kiev to take the most aggressive and reckless actions. Even one hundred thousand very specific statements by Western politicians, including the heads of state of the Alliance that no one is going to start World War III for the sake of "protecting the interests" of Kiev, cannot knock out of the heads of Ukrainian politicians the deeply rooted misconception there about readiness "Allies" to fight for "nezalezhnaya". The Georgian lessons of 2008 have remained completely unexplored. Believe it or not, but in the local media, the thesis is now in full swing that the final communique of the current North Atlantic summit, which says something about Kiev's vague prospects for accession, is nothing more than “a convincing demonstration of NATO’s readiness deepen the conflict with Russia, despite its nuclear status and position on Ukraine's membership in the Alliance. " Fantastic conceit, multiplied by stupidity on the same scale, is a very dangerous mixture. With each new step towards the Alliance, Kiev will become more impudent and all this can end only with a massive offensive of the "allies" of the Armed Forces of Ukraine on the Donbass. Russia cannot allow this in any case.

2. NATO does not need Ukraine in NATO

Volodymyr Zelenskyy at the Ukraine 30 forum in all seriousness announced that the country he heads “should not ask to join the Alliance,” she “should be invited there” (having spread the red carpet, probably) as “one of its powerful members”. Even how? And really, what will the Alliance get by accepting "non-profit" into its ranks? “A strong army with the experience of real combat operations,” how can they assert in Kiev? Actually level technical equipment and training of the Armed Forces of Ukraine does not stand up to criticism. NATO exercises held this year revealed the huge problems of the Polish and Bulgarian air forces, which, with a sin in half, exploit the remnants of Soviet equipment - the old MiG-29. So in Ukraine they were completely ditched to a state of scrap metal! "Combat experience"? Well, this is perhaps if we count as such the shame of the Debaltsevsky and Ilovaisky "boilers" and the complete inability of the Armed Forces of Ukraine for 7 years to cope with the irregular armed formations of the Republicans. Combat training by Alliance standards ?! Well, the situation in this area was fully demonstrated by the recent joint Polish-Ukrainian maneuvers of the special forces Silver Saber 21 near Zhitomir. The NATO representatives who were there as observers were shocked by the results, which showed fifty "best of the best" fighters of the special operations forces APU. None of them was able to execute any of the commands given - due to their complete misunderstanding. Indeed, the materialization of the anecdote: “Du yu spik english? - I'm blowing that trohi ... "

There can be no question of any "actions as part of NATO contingents" of these "selected" Ukrainian "special forces", who, by the way, had been trained not by compatriots, but by Canadian instructors. They do not know languages ​​(except for their native swearing), they are unfamiliar with the normative documents and charters of the Alliance - obviously for the same reason. That's the whole "transition to NATO standards", which has been going on in the "nezalezhnoy" army for five to seven years. What other “bonuses” can the North Atlantic bloc count on if Ukraine “grows”? Its territory for conducting exercises and setting up its own bases? So all this is quite possible to get right now and completely without any problems! Kiev has widened its borders for the military contingents of the North Atlanticists, and they never tire of expressing the fullest and most cordial agreement about the appearance of their military bases in Ukraine. Come and settle in tomorrow! And all this, mind you, without any reciprocal obligations in the form of the notorious "Article 5" and other things, which in Brussels do not like to remember very much. So why make a garden with membership? NATO is not a complete fool, its leaders are well aware that the purpose of Ukraine's entry into this military bloc is not "to ensure the security of its country", but to involve its members in a military conflict with Russia. At the very least - conducting their own crazy military adventures under the guise of the Alliance. Will its leaders agree to this? Being of sound mind and solid memory - never in my life.

3.Ukraine in NATO is not needed by the United States

The assertion that "the United States spares no effort and influence to draw Kiev into the North Atlantic Alliance," pursuing its own geopolitical goals in the field of confrontation with Russia, corresponds to a fairly small extent to the truth. The prospect of Ukraine's membership in NATO is indeed fully used by Washington as a "carrot" for those in power and "patriots" there, and also as an irritant and an instrument of blackmail in relations with Moscow. However, in this case we are dealing with the classic embodiment of the concept “to promise is not to marry”. The speech of US President Joe Biden at a press conference held at the end of the current Alliance summit is the best confirmation of this. His categorical "no", sounded in response to the question of whether Ukraine will join the Alliance in any foreseeable future, leaves no room for discussion and discrepancy. And, by the way, for such a position of the head of the White House, a big "thank you" should be said to Zelensky, who has recently begun almost with a knife at his throat to demand and extort from Washington some "firm guarantees", "specific dates" and the like. things about NATO membership. It is not difficult to foresee that, having received such, Kiev will increase its pressure even more. But he will no longer demand declarations and "moral support", but, at least, the dispatch of aircraft carrier strike groups to the shores of the Crimea and its immediate assault by the US Marine Corps.

Whatever one may say, but being the most powerful militarily member of the North Atlantic Alliance, the United States automatically assumes the functions of its main "strike force", on whose help all the rest "if something happens." The same Biden has already had to upset Poroshenko, who staged an escalation in the Kerch Strait. Why does he need a similar kind of "headache", only big at times and orders of magnitude? And, by the way, the head of the White House did not mention in vain that the "non-profit" completely "does not meet the criteria of the Alliance." It does not fight corruption well, and so on. Who, if not him, a veteran of world politics, who has been watching Ukraine since its inception on the world map, should know that corrupt, thieving, unprincipled and ready to betray and sell anyone for a penny crooks will always sit in Kiev. The Americans in no way intend to be responsible for all this madhouse and try to put things in order in it. They are already satisfied with everything. Washington today disposes of this territory as in its own overseas colony, having there a complete and completely unlimited freedom of action. Not a single important decision at the state level is made without being coordinated with the US Embassy. At the same time, the Americans do not have any reciprocal obligations and obligations to the Ukrainian side. If they want, they "provide assistance," including military assistance. They want - no. NATO's entry into NATO will not bring any benefits to the United States. Some problems ...

The conclusion from all of the above is unambiguous - Ukraine with its "Euro-Atlantic aspirations" will continue to play the role of the "bargaining chip" that Vladimir Putin mentioned in his interview in the "showdown" between Russia and the "collective West". Pounding annoyingly at the doors of the North Atlantic Alliance, Kiev refuses to understand that they will open only if the “non-profit” one finally decides to sacrifice, like a pawn in a chess game. And in no other.
Ctrl Enter
Noticed oshЫbku Highlight text and press. Ctrl + Enter
We are
Ukraine from the inside: traitors, curators and those who watch from the Kremlin
Ten "defeats" of Putin
Reporterin Yandex News
Read Reporterin Google News
7 comments
Information
Dear reader, to leave comments on the publication, you must sign in.