GXNUMX Summit: The World Is Divided, War Has Been Declared 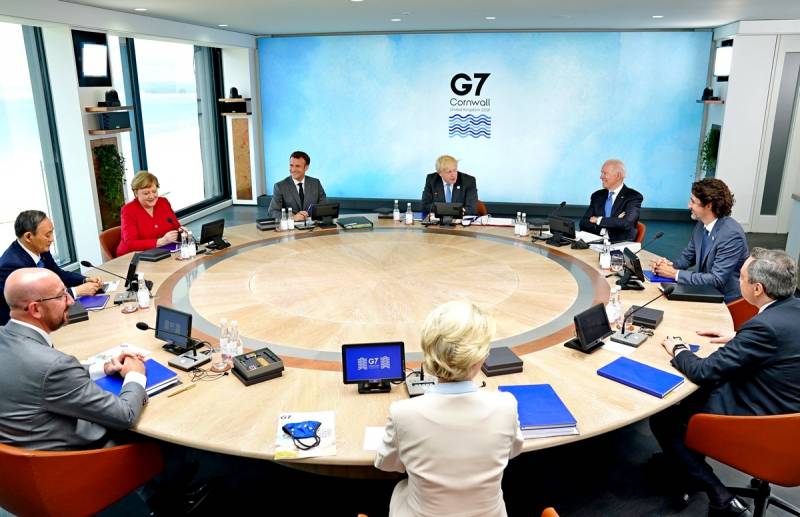 Held from June 11 to 13 at the Carbis Bay resort in the UK, a meeting of the leaders of the G7 states, according to the declarations proclaimed after its end, "allowed us to take new steps to overcome global problems and challenges." However, the official communiqués adopted at the end of the summit testify to something completely different - against the background of talks about overcoming the COVID-19 pandemic and its consequences, combating global warming and environmental pollution, as well as other good intentions, the meeting of the GXNUMX leaders, which took place with the participation of US President Joe Biden (which largely determined its main agenda), in fact, gave rise to a new "Cold War". And that's at least.


The world is again divided into two opposing camps and the "progressive world community" is again trying to dictate to those who are appointed by its heads to the role of their own antagonists the conditions that must be followed and the rules that they must follow. From now on, the confrontation that has been going on in recent years has been clearly organized organizationally, an "ideological base" has been laid for it, the main directions in which an irreconcilable and uncompromising struggle will be waged have been outlined. Let's try at least in general terms to figure out what we are talking about specifically.

As expected by the most perspicacious analysts, the main leitmotif of the communication between the head of the White House and his allies was their mobilization for the "great march" against the Celestial Empire. "To resist and compete" - this is a short formula that fits the whole of Washington's vision of the relationship of the "world community" with "too much allowing themselves" Chinese comrades. At the same time, the fact that for the United States it is really a matter of life and death is carefully hushed up - their technological и economic lag behind Beijing is approaching critical. However, according to some experts, it has long become irreversible and insurmountable - for the Americans, of course. If it were otherwise, the Senate of the US Congress would not have taken a "firefighting" decision to allocate $ 250 billion just for "maintaining the American leadership in the field of high technologies." Yes, if in 1990 the United States produced about 40% of all semiconductors on the planet, now this level has dropped to 12%. What kind of leadership is this?

At the same time, US Senator Chuck Schumer (by the way, one of the authors of the relevant legislative initiative) bluntly stated that only those countries that “achieve the greatest success in the field of innovation and artificial intelligence” will be able to “remake the world in their own image and likeness”. At the same time, he urged not to spare anything in order to "pave the way for another generation of American leadership in the world." This is what we are really talking about - not about the economy at all, but about the geopolitical claims of the United States, which they do not even think to give up. It is not surprising that the slogan "Catch up and overtake China!" there they are now professing and promoting with the same fury with which the crazy Khrushchev once tried to win the race with the Americans themselves. But why is all this to Europe?

Be that as it may, but in the final communique of the current G7 summit, its participants are trying to "set the framework" and "outline the red lines" for Beijing. You see, they are "very seriously concerned about the situation in the South China and East China Seas," as well as "the attempts of the Chinese side to unilaterally change the balance of power existing there." The Celestial Empire is accused of "wrong" actions in relation to Taiwan and Hong Kong, "violations of human rights" in Xinjiang, and in general "in relation to its own and foreign citizens." Moreover, the main anti-Chinese bogey of recent years - accusations of the "artificial nature of the coronavirus", for the emergence of which, of course, are also the responsibility of the Chinese comrades, is being brought to light again. The G19 is trying to demand some kind of "scientifically based and transparent investigation into the origin of COVID-XNUMX," which should be carried out by WHO experts, who have already spoken out on this topic once.

Their previous verdict, which excludes the version of "the appearance of the virus in Chinese biological laboratories", strongly imposed on the world by the United States, Washington and its allies in the G7 are categorically not satisfied. There is no doubt that the task of "re-checking" (if such is allowed into the Celestial Empire, which is extremely doubtful) will precisely be getting the "correct answer", to which the facts, stubbornly unwilling to fit into the American concept, will be adjusted. The summit also announced the launch of another initiative of the "Seven" - a global "infrastructure project for developing countries", which, as stated quite openly, should become an alternative to the Chinese program "One Belt - One Road". It remains only to sympathize with those "developing countries" which are to become a field of "clarification of relations" between the G7 countries and China.

As far as our country is concerned, here we have the most accurate embodiment of the English idiom "from bad to worse." To describe the vector of development of the attitude of the G7 countries to Russia, she fits perfectly well. No, the ritual mantas about "the desire for predictable and stable relations with Moscow" and even "cooperation" with it in some areas, of course, were voiced in the final communique. But what are they after the words that Russia "continues its malicious and destabilizing actions", "interferes in the democratic systems of other countries" and "does not fulfill international obligations regarding the observance of human rights" ?! A full set of charges! Moreover, the G2014 countries said how they cut it off: "Russia is not a mediator in the conflict in eastern Ukraine, but its direct participant." Once again, as in 2015-XNUMX, absurd demands are heard about the "withdrawal of Russian troops" from the eastern border of the "nezalezhnaya" and ... "from the Crimea"! Judging by the accompanying assurances of "support for Ukrainian sovereignty and territorial integrity," the peninsula should then also be handed over to Kiev. Well, what kind of "stable relationship" can there be after that, not to mention "interaction and cooperation"?

In truth, after the announcement of such ultimatums, as well as the introduction by Washington of a new round of sanctions against the sovereign state debt of Russia, the meeting in Geneva scheduled for June 16 loses all meaning. This becomes even more obvious in the light of Joe Biden's changing rhetoric before our eyes, from restrained-aggressive turning into openly boorish. The head of the White House let go of the first threat to our country, barely stepping off the ladder that brought him to the Old World, American "board number 1". It was there that he declared his readiness "to respond constructively and decisively to the harmful activities of Russia," if this would follow. As is clear both from the summit communique and from the concrete actions of the United States, these words are being implemented literally before our eyes.

However, on what has already been achieved, Mr. Biden is clearly not going to stop. The old man got sulky, and how. At a press conference held at the end of the G7 summit, the head of the White House began pouring downright sensational statements. It turns out that "Russia's behavior on many fronts is completely unacceptable and contrary to all international norms." And all because Vladimir Putin is "an autocrat who does not report to the people." However, as the American leader greatly reassured his listeners, "Russia is much weaker than it wants to appear, so it has gnawed off real problems that will make the Kremlin difficult to chew ..." The quote is literal, so don't blame me. Here, of course, it would be possible to let the hairpin go about the fact that the president, aged for years, speaking about someone's problems with the maxillofacial apparatus, acts strictly according to the principle: "whoever hurts what, he talks about it."

However, the fact that just a couple of days before the summit in Geneva, Biden began to behave so defiantly, does not leave much room for jokes. Indeed, it is scary to think to what heights of eloquence he can reach after talking with his colleagues from NATO. By the way, Belarus was not forgotten at the meeting of the G7 leaders either. Alyaksandr Lukashenka was demanded to surrender unconditionally in the form of “a change in the domestic political course and the holding of free democratic elections” under the full control of the West. Who should win on such, I think there is no need to explain. They also promised Minsk “to bring to justice all those responsible for violating human rights” in the country. How this can be done without NATO intervention in Belarus, or, at least, a coup d'etat there is not clear. The fact that all this has the most direct relation to our country is understandable. Moreover, the document speaks directly about the "role of Russia in the forced landing of the Ryanair aircraft," which, however, still needs to be "studied."

It should be noted that Beijing's reaction to the final communiqué of the G7 summit has already been quite sharp and uncompromising. The Chinese Foreign Ministry called on the GXNUMX "to stop deliberately slandering the PRC and attempts to openly interfere in its internal affairs." of a similar interpretation and are extremely unhappy with the fact that it was voiced at such a high level. Moreover, the official China stressed its readiness to defend "its security, sovereignty and national interests in the most decisive way." To tell the truth, at the time of this writing, no similar demarches by the Russian Foreign Ministry were known at the time of this writing. Obviously, they still prefer to keep "proud silence" on the eve of the meeting of the presidents. Well, they are diplomats, and they probably know better ...

I would like to believe that the Kremlin really didn’t have high hopes for the upcoming event, otherwise it could turn out to be very offensive. “It is unlikely that it will be possible to create mechanisms for working in areas of mutual interest,” as Vladimir Putin recently said, highlighting his expectations from a dialogue with Biden. The United States seems to have chosen the path not of cooperation, but of global confrontation. The communiqué of June 13 is, in fact, an announcement of its beginning. Alas, the "discharge" and "reboot" are canceled again indefinitely.
Ctrl Enter
Noticed oshЫbku Highlight text and press. Ctrl + Enter
We are
Who actually won the Cold War and what the future holds for the world
Ten "defeats" of Putin
Reporterin Yandex News
Read Reporterin Google News
15 comments
Information
Dear reader, to leave comments on the publication, you must sign in.