Why the Russian T-14 "Armata" tank has a great future 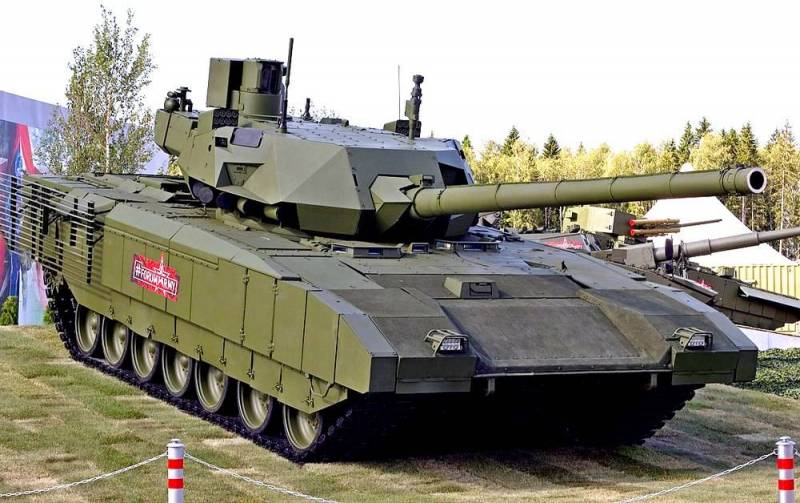 Many copies have already been broken around the promising Russian T-14 tank on the Armata platform. Some praise him, others blaspheme. Instead of the promised 2300 units, the Russian Ministry of Defense eventually ordered a very small trial batch, which the ill-wishers immediately considered evidence of the project's failure. However, it is too early to gloat over them, and here's why.


Without exaggeration, Russia, one of the world leaders in tank building, with its universal tracked platform "Armata" was well ahead of its time. The T-14 is a third generation tank with an uninhabited turret and contains all of our state-of-the-art military Technology... It is not only a promising main battle tank, but also a mobile command post capable of performing reconnaissance, target designation and fire adjustment functions of other tanks, self-propelled guns and air defense systems, as well as controlling its own Pterodactyl reconnaissance UAV. This combat vehicle is designed with stealth technologies that reduce its visibility in infrared, radio and magnetic ranges. Its armament is a 125mm smoothbore cannon 2A82-1M with automatic loading capability and a 12,7mm Kord heavy machine gun. In the future, "Armata" may become a platform for the deployment of laser weapons and hypersonic missile systems. The T-14 is protected by the Afghanit complex, which intercepts and blinds anti-tank missiles, as well as the Malakhit dynamic armor, which reflects shots from anti-tank grenade launchers and sub-caliber shells.

Military experts from The National Interest came to the idea that the Russian tank is superior to the armored vehicles of the North Atlantic Alliance:

These advances in firepower, mobility and survivability indicate that the T-14 is more than capable of giving odds to any NATO MBT currently in service.
However, they are not original in their disappointing conclusions. Earlier, the FMSO analytical agency at the Pentagon reported that the "Armata" has a number of significant advantages over the tanks of the NATO bloc. Later, in the forced compliments of the T-14, the British also scattered:

Without any hyperbole. The Armata is the most revolutionary step in tank building.
The appearance of the "Armata" near Moscow, which the "Leopard-2" is unable to withstand in open combat, prompted Germany and France to create a joint defense project to develop a tank superior in performance characteristics to our T-14. True, the German-French tank will have to wait for a long time, and the "bast" Russia has the "Armata", here it is. At the same time, the Russian tank is cheaper than the American M1 Abrams, the South Korean K2 Black Panther and the Turkish Altay MBT.

So why, then, instead of 2300 T-14s, our own Ministry of Defense was ready to buy a batch 100 times less? The question is not entirely straightforward.

On the one hand, "Armata", without exaggeration, was really ahead of its time. The developers were able to cram all the most advanced achievements of the domestic defense industry into the tank. This became his advantage, but at the same time an "Achilles heel". A large number of the most complex systems, components and assemblies have been introduced into the tank, which must be tested for years in action - in deserts, in the steppes, in the mountains, in urban conditions, wherever possible and impossible, in order to catch defects and quickly eliminate them. Let's face it, this should be done on a small batch, and not on the voiced 2300 tanks.

For example, his uninhabited tower. This is an interesting technical solution, but it hides a lot of potential problems. So, in real combat conditions, the T-14 will critically depend on the performance of the electro-optical means, as well as on the functioning of the entire power supply system of the combat vehicle. If anything happened, the tank could remain blind, deaf and with an inoperative gun turret. Yes, this is a solvable problem, since it is possible to create duplicate systems, as well as equip the "Armata" with devices for a three-dimensional television image coming from many cameras on the tank to the operator's helmet-mounted display. You can, but ...

On the other hand, all this, of course, can be done, but it will cost a lot of money. The experts of the aforementioned publication The National Interest also wondered if the Russian Ministry of Defense has enough financial resources to finalize and put the T-14 into a large series. The question is really not at all idle, since our defense budget is constantly being sequestered. It is important that the Russian military department is doing quite well with the available stocks of T-72, T-80 and T-90, which are being modernized and become a real threat to the tanks that a potential enemy has. At the same time, it costs the ministry less than mass production of the T-14. Perhaps, in the department of Sergei Shoigu, they understand that the era of huge epic tank battles, as it was in the Great Patriotic War, is in the past.

So, what do we have in the bottom line. There is a promising T-14, which here and now in the amount of 2300 pieces is simply not needed. The tank still needs to be refined and tested in real combat conditions. But his potential is really very great, and you shouldn't listen to Russian-speaking spiteful critics who mock Armata from abroad. The manufacturer has already prepared an export passport for the possible sale of the tank to foreign buyers. The larger the batch is on the assembly line, the more comfortable the price will be, including for our RF Ministry of Defense. The T-14 can serve as an excellent platform for the development and testing of combat artificial intelligence and robotic technologies. The future belongs to "Armata", and the time of this tank will come.
Ctrl Enter
Noticed oshЫbku Highlight text and press. Ctrl + Enter
We are
New weapons on the way: What is known about the anti-satellite complex "Burevestnik"
Russia was able to collect combat vehicles superior to the enemy from old tanks
Reporterin Yandex News
Read Reporterin Google News
34 comments
Information
Dear reader, to leave comments on the publication, you must sign in.