BOD "Admiral Vinogradov": on the way to becoming a cruiser 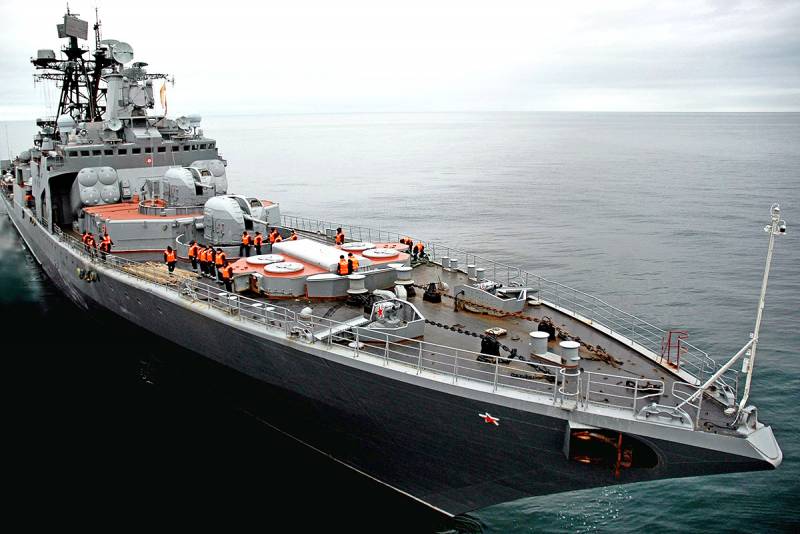 Very little time has passed since the return to the Navy of the modernized BOD pr. 1155 "Marshal Shaposhnikov", now reclassified as a frigate (pr. 1155M), when fresh information appeared that sheds light on the fate of its brother, the BOD "Admiral Vinogradov. ". So, according to a recent interview with the commander of the Pacific Fleet, Admiral Sergei Avakyants, the stage of working out the promising appearance of the updated ship is coming to an end. In addition, the possibility of a serious increase in the composition of its strike missile armament is being considered, and the task is set to increase the capabilities of air defense. At the same time, Avakyants separately emphasized that the "Admiral Vinogradov" will not exactly repeat the "Marshal Shaposhnikov", since the ship's weapon systems in Russia have already been improved.


In order to draw any categorical conclusions on the fact of this statement, it is necessary to return to the situation with the modernization of the Shaposhnikov and give a balanced assessment of the changes on the ship.

What is the new frigate?

Needless to say, there are really a lot of changes and they are visible to the naked eye: instead of two AK-100 nose guns, there is now one modified gun mount A-190-01 - much faster than its predecessors and less noticeable for the radar. The Rastrub-B quad launchers installed on the side under the bridge were replaced by the Uranium anti-ship missile launchers. At the same time, the updated ship for oddity retained a significant number of obsolete weapons, which, even at the frigate testing stage, caused a lot of acute questions in the expert community. The attention was primarily attracted by serious gaps in the air defense and anti-aircraft defense of the ship, which in many respects devalued the whole meaning of the large-scale modernization undertaken.

With a standard displacement of 7 thousand tons, the frigate "Marshal Shaposhnikov" ultimately received a much weaker composition of weapons than the 4,5-ton frigates of the "Admiral Gorshkov" type of the second series (with 32 "Calibers" declared by the developer on board). The modernized frigate retains the outdated Dagger air defense systems and lacks an anti-torpedo defense system. Especially eye-catching torpedo tubes CHTA-53, which, without any exaggeration, are frank antiques and by now, together with torpedoes SET-65 and 53-65K, no longer have any serious combat value. As a result, it turns out that, as a shock carrier, the modernized Shaposhnikov is weak for its displacement, has insufficient air defense even for self-defense and even more serious shortcomings in anti-submarine defense (especially in terms of protection against torpedoes).

Apparently, the listed claims to the ship became so obvious that even before the ship was put into operation, the Pacific Fleet command, together with Dalzavod, hastily put forward proposals for the modernization of the next ships of Project 1155, in particular, the Admiral Vinogradov in a much more perfect version. ... Moreover, realizing the problematic nature of promoting sound ideas in the Russian Navy, these proposals were purposefully made public by presenting them at the Dalzavod stand with subsequent publication on the Web. 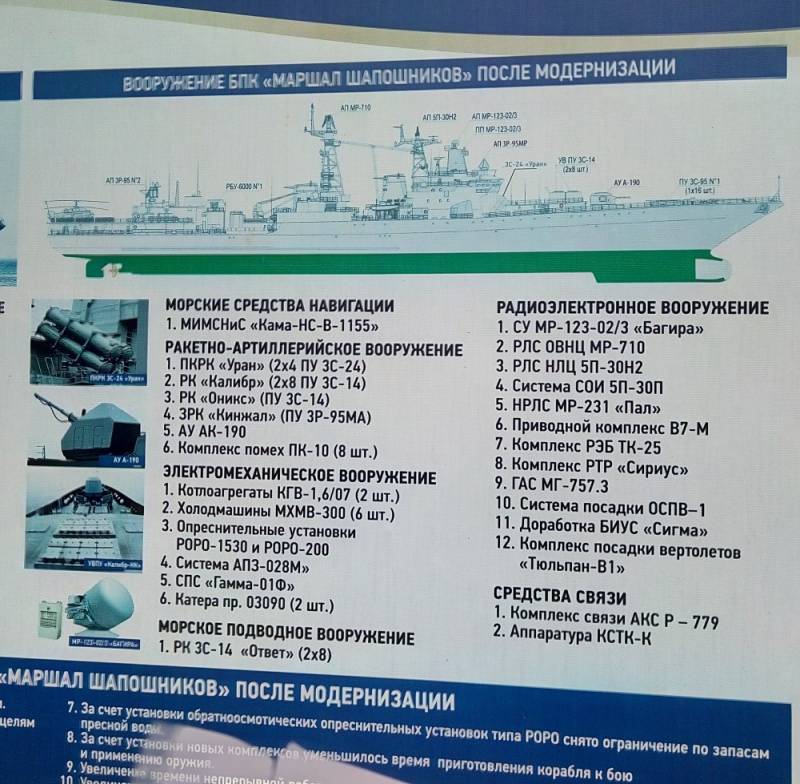 How does the fleet want to see "Vinogradov"?

As can be seen from the stand, it is proposed to double (compared to Shaposhnikov) the arsenal of tactical strike weapons, replace the obsolete Kinzhal air defense system with a modern Shtil-1 air defense system, seriously improve electronic weapons, and most importantly, provide a full-fledged anti-torpedo and anti-submarine protection by installing the "Package" complex. Such modernization will undoubtedly turn the Vinogradov into the most powerful ship in the entire Navy (not counting TARKRs), its missile ammunition, strike and defensive capabilities (32 UKSK cells for Caliber and Zircon, 16 Uran missiles, 48 ​​anti-aircraft missiles) will, without any exaggeration, correspond to the capabilities of a light missile cruiser. At the same time, the modernized GAS Polynom, coupled with the Packet complex and the Answer missiles, as well as an air group of two helicopters, will enable the ship not only to effectively defend itself against enemy submarine torpedoes, but also to act as a submarine hunter. 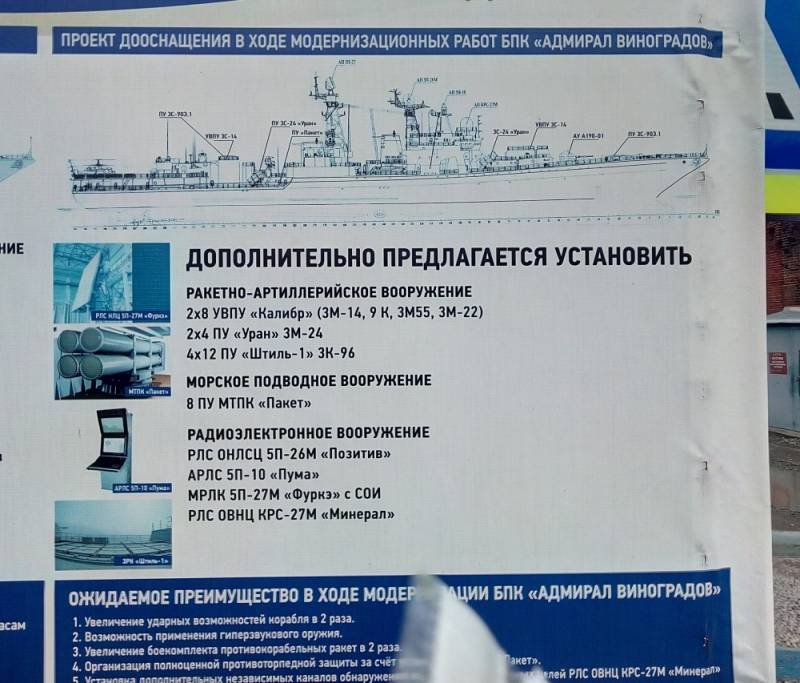 The lack of modernization of modern air defense systems of self-defense (for example, ZAK "Broadsword" or ZRAK "Pantsir-M") looks somewhat controversial. Perhaps this is the weakest point of the proposed project, since the "standard" AK-630 installations already meet the requirements of modern anti-aircraft combat very little. At the same time, this drawback does not look critical, given the highly effective medium-range air defense system with significant ammunition, as well as a set of electronic warfare equipment (consisting of 8 PK-10 passive jamming systems) and the already mentioned TK-25 electronic warfare system.

In general, the project for the renovation of the ship proposed by the Navy is extremely conceptually thought out for our days. And given that the naval leadership has formed a concrete understanding of what it wants to see as a result of the modernization program for the ships of the 1155 project, there is every chance for a similar update of the rest of the BODs in service. Separately, in this case, the question will arise about the fate of "Marshal Shaposhnikov", which, like the "first pancake" - "came out lumpy", but it is possible that in the future it will still be brought to mind.
Ctrl Enter
Noticed oshЫbku Highlight text and press. Ctrl + Enter
We are
"Internal kitchen" of the Navy. Construction wars for access to the budget of the Ministry of Defense
Reincarnation of "Marshal Shaposhnikov": Russia saves the fleet by altering old ships
Reporterin Yandex News
Read Reporterin Google News
15 comments
Information
Dear reader, to leave comments on the publication, you must sign in.